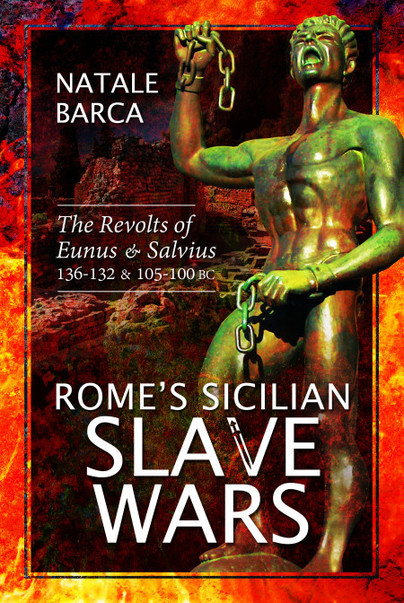 Add to Basket
Add to Wishlist
You'll be £19.99 closer to your next £10.00 credit when you purchase Rome's Sicilian Slave Wars. What's this?
+£4.50 UK Delivery or free UK delivery if order is over £40
(click here for international delivery rates)

In 136 BC, in Sicily (which was then a Roman province), some four hundred slaves of Syrian origin rebelled against their masters and seized the city of Henna with much bloodshed. Their leader, a fortune-teller named Eunus, was declared king (taking the Syrian royal name Antiochus), and tens of thousands of runaway slaves as well as poor native Sicilians soon flocked to join his fledgling kingdom. Antiochus’ ambition was to drive the Romans from the whole of Sicily. The Romans responded with characteristic intransigence and relentlessness, leading to years of brutal warfare and suppression. Antiochus’ ‘Kingdom of the Western Syrians’ was extinguished by 132 but his agenda was revived in 105 BC when rebelling slaves proclaimed Salvius as King Tryphon, with similarly bitter and bloody results.

Natale Barca narrates and analyses these events in unprecedented detail, with thorough research into the surviving ancient sources. The author also reveals the long-term legacy of the slaves’ defiance, contributing to the crises that led to the seismic Social War and setting a precedent for the more-famous rebellion of Spartacus in 73-71 BC.

This is a well-researched and well-written book about two slave uprisings that have stayed too long in the shadow of Spartacus’ more famous rebellion. Barca places these events into their local and broader contexts, illuminating the struggles of slaves under the thumb of a horrific regime. Some nods to Marxist theory are not very helpful, but they are understandable, and should be weighed against the glorification of Rome that is all too common in recent historiography. Military history students will enjoy this book too. Barca’s observation, that Rome might lose battles but not wars, applies all too well to Sicily’s slave wars, which, in the end, were valiant efforts but doomed almost from their inception.

The Romans depended very heavily on the use of slaves. They were a commodity, and engine of expansion and, although some were treated very well and freed, a great many were not. – Very Highly Recommended

I did find this book to be an interesting read, and a good account of these large scale and very significant slave uprisings, giving us an idea of what the rebels were attempting to achieve, the methods they chose, and each revolt managed to survive for so long before being crushed.

Natale Barca has a degree in Political Science. He was a Visiting Research Scholar at the prestigious University of California Department of Classics in Berkley and an Academic Visitor at the Institute of Classical Studies (ICS), School of Advanced Studies, University of London. He has previously published eight books in Italian and one e-book in English on Egyptology, Ancient Near East History and Archaeology, and Roman History. He lives in Trieste, Italy.

The last century of the Roman Republic saw the consensus of the ruling elite shattered by a series of high-profile politicians who proposed political or social reform programmes, many of which culminated in acts of bloodshed on the streets of Rome itself. This began in 133 BC with the military recruitment reforms of Tiberius Gracchus, which saw him and his supporters lynched by a mob of angry Senators. He was followed by a series of radical politicians, each with their'own agenda that challenged the status quo of the Senatorial elite. Each met a violent response from elements of the ruling order,…