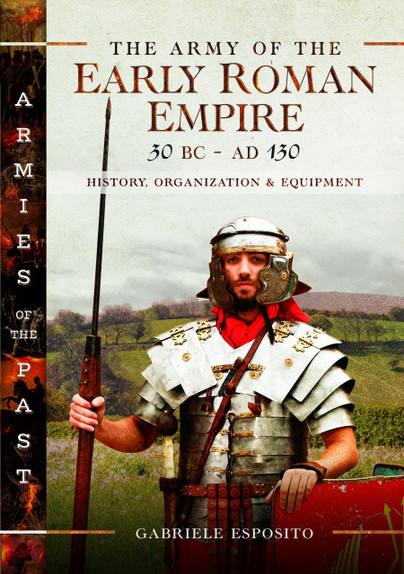 Preorder
Add to Wishlist
You'll be £20.00 closer to your next £10.00 credit when you purchase The Army of the Early Roman Empire 30 BC–AD 180. What's this?
+£4.50 UK Delivery or free UK delivery if order is over £40
(click here for international delivery rates)

The legionary soldier of the early Empire period, with his distinctive segmented armour, is one of the images most closely associated by popular imagination with ancient Rome. Such soldiers conquered most of Britain, suffered and avenged the terrible disaster of the Teutoburg Forest and vanquished the fearsome Dacians across the Danube, a feat immortalized on Trajan’s Column, as well as fighting many other tribes. In the East they overcame the Great Jewish Revolt and repeatedly contended with mixed success against the powerful Parthians. This was the army that enforced the so-called Pax Romana at the point of a gladius and maintained the greatest empire the world had yet seen. Of course, such troops were also employed to bloody effect in the many civil wars such as those of AD69, ‘the Year of the Four of the Emperors’.

Gabriele Esposito describes the tactics, organization and equipment of the Roman army at the height of its powers, considered by many to be the most efficient and powerful fighting force of the ancient world. He gives an overview of the most significant campaigns and considers in detail not only the iconic legionaries but also the various auxiliary units, including cavalry. His clear, accessible text is supported by dozens of colour photos of replica weapons, armour and other kit in use.

Gabriele Esposito is an Italian researcher and a long-time student of military history, whose interests and expertise range widely over various periods. Most of his recent studies have been dedicated to the reconstruction of the organization, functioning and tactics of the armies across history; in each of his publications there is always some relevant space dedicated to the 'material culture'of the various armies taken into account and - more in particular - to the empirical science known as 'uniformology'. Gabriele is the author of numerous books on armies and uniforms and is a regular contributor to many specialized magazines in Italy, France, Netherlands and UK. His many previous works include Armies of Early Colonial North America 1607-1713; Armies of the Late Roman Empire 284-476; Armies of the Hellenistic States 323 BC to AD30; Armies of Celtic Europe 700 BC-AD 106; Armies of Ancient Greece, circa 500 BC to 338 BC; and The Macedonian Army of Philip II and Alexander the Great 359-323 BC, all published by Pen & Sword since 2018. He lives in southern Italy, near the ancient battlefield of Beneventum.