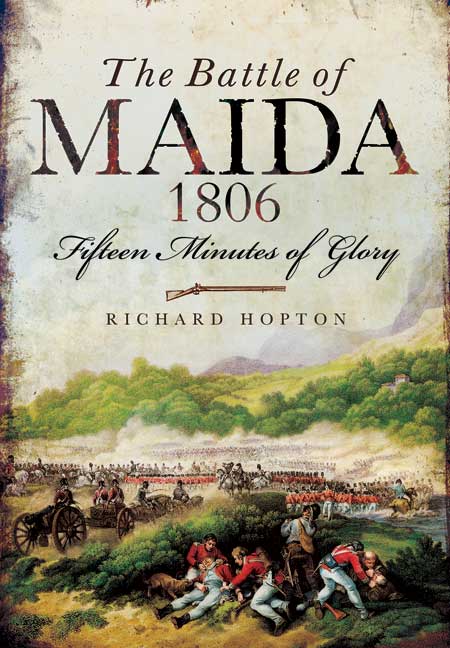 A nation's history is littered with conveniently forgotten defeats and military disasters but it is unusual for significant victories to be ignored. Richard Hopton, the up-and-coming historian, has uncovered the long overlooked defeat of Napoleon's forces by General Sir John Stuart at Maida, Southern Italy in 1806. For many years the only hint that there had been a triumph there has been the residential area of North West London that derives its name from the battle.

Following Ulm and Austerlitz, Napoleon's reputation for military genius was fast becoming a morale problem for his opponents, in the same way that Rommel's prowess did some 240 years later. No small part of the significance of the Allied victory at Maida in 1806 was the proof it offered that the French under Napoleon were not invincible.

The Author brilliantly describes the cast of colourful yet highly improbably characters who fate and circumstances brought together. Arguably pride of place must go to Ferdinand II, Ruler of the Kingdom of the Two Sicilies, whose eccentricity was only exceeded by his abject incompetence.

This is a valuable book for anyone interested in the Peninsular War on the British Army in the French Wars.

A well balanced analysis of an action that is surrounded by myth perpetuated by historians. It is placed within its European context in a clearly written and analytical style.

This is an excellent account of this battle, the political manoeuvring that led to a British army being present on Sicily in the first place and the campaign in Naples before and after Maida. The battle is examined in great detail and from both points of view, with good use of British and French sources allowing several controversies and misrepresentations of the fighting to be corrected.