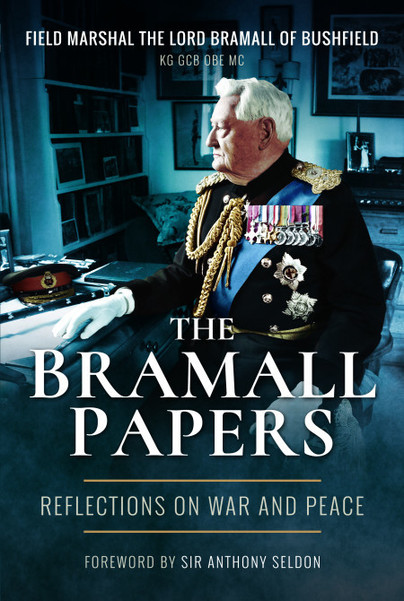 Reflections on War and Peace

As featured in the Daily Mail (4/11/17): Former head of the British Army Lord Bramall opens up about the nightmare child abuse accusations levelled at him aged 92

As featured in the Daily Mail (23/11/17): Fearless soldier who speaks truth to power - the wisdom and leadership of Field Marshal Lord Bramall

"Bramall is one of a kind: a brave and talented soldier who became the finest military theorist of his generation. His sage words should be required reading for politicians of all hues." Saul David – The Daily Telegraph

You'll be £4.99 closer to your next £10.00 credit when you purchase The Bramall Papers. What's this?
Need a currency converter? Check XE.com for live rates

Over the course of his 75 year career Field Marshal Bramall – or Dwin as he is universally known – has been in the forefront of military thinking. Clearly destined to reach the pinnacle of his profession he shone in a succession of prestigious appointments both in command and on the staff. He fought in Normandy, saw active service in Ireland and Borneo and masterminded the Falklands Campaign.

As this unique collection of personal Papers , dating from the 1950s to the present day, testify, Bramall has never shied away from controversy or original thought, whether on low level leadership or higher military strategy.

His views are far from predictable or trenchant as demonstrated by his changing nuclear stance and his clearly argued opposition in the House of Lords to intervention in Iraq.

The publication of this unique collection of letters, lectures, speeches and theses on a wide range of topics gives the reader the opportunity to delve into a rich mine of sound military thinking and common sense.

Reflections of a great man of relevance to the future as much as the past. Highly recommended.

Dwin Bramall has put together a fascinating collection of military papers; speeches to the House of Lords and reminisces. The last of WWII's serving soldiers, having landed on the Normandy Beaches in June 1944, he rose to become CGS and retiring with the rank of Field Marshal. I met Dwin Bramall on a couple of occasions and found him to be fascinatingly infirmative, always polite and a perfect host. Military Historians will welcome this collection of papers as will anyone joining the services. The Bramall Papers are very much a must read and an invaluable reference book

This highly decorated field marshal is consequently no ordinary veteran, and his book The Bramall Papers is a fascinating insight into one of Britain’s foremost military minds. With a foreword by Sir Anthony Seldon and edited by Robin Brodhurst, The Bramall Papers is a wideranging collection of lectures, speeches and letters dating from the 1950s to the present day. It is a serious study into the intensely complicated realities of modern warfare and its implications. The book is initially structured chronologically and covers World War II and the Cold War, with Bramall being heavily involved in both. His perspective on World War II is interesting because he approaches his own experiences from a broader historical outlook rather than as a direct veteran testimony. Nevertheless, it is clear that the war left an indelible impression on him.

Every chapter of this anthology bears witness to deep thought, breadth of vision and, perhaps most importantly, great wisdom. It is a book that will have wide appeal, especially to those with an interest in defence policy, strategy, war studies and leadership.

Interview article (12 pages) Reflections on War as featured by

This volume certainly reflects Bramall's breadth of interest and it holds the readers attention.

As Sir Anthony Seldon rightly states in his introduction, Bramall stands as one of the great post-war military thinkers in Britain. His vision, depth of analysis and clarity of expression come through, making this reviewer reflect on some of his successors of late and finding them wanting.
He has been well served by his editor both in the selection of pieces, but also by his light touch in the assembly, with helpful notes but not overly imposing upon it.

An insightful, well assembled and highly readable volume which does its originating author – and editor – much credit.

Bramall is one of a kind: a brave and talented soldier who became the finest military theorist of his generation. His sage words should be required reading for politicians of all hues.

A wonderful book, consisting of speeches, reflections and memories by our most distinguished field marshal.

The Bramall Papers are in their way a unique anthology of strategic and tactical wisdom. They ought perhaps to be inscribed with the words of Caesar Augustus: ‘Young men, hear an old man to whom old men hearkened when he was young.'

As featured in Books of the Year

Field Marshal The Lord Bramall of Bushfield KG GCB OBE MC was educated at Eton College before being commissioned into the King’s Road Rifle Corps in 1943, taking part in the Normandy landings. He was awarded the Military Cross in March 1945.

His career progressed rapidly, instructing at the School of Infantry and the Staff College, Camberley before serving on Lord Mountbatten’s staff, earning his OBE.

After commanding his Battalion, during the Borneo Confrontation, and 5th (Airportable) Brigade, he became successively GOC 1st Armoured Division, CBF Hong Kong and C-in-C UK Land Forces. In 1979 he was appointed Chief of the General Staff playing a key role in the Falklands War before being promoted to Field Marshal as Chief of Defence Staff in 1982.

His many appointments have included President of the MCC, Lord Lieutenant of Greater London and Knight of the Garter.

He married Avril (Vernon) in 1949 and they had a son and daughter.