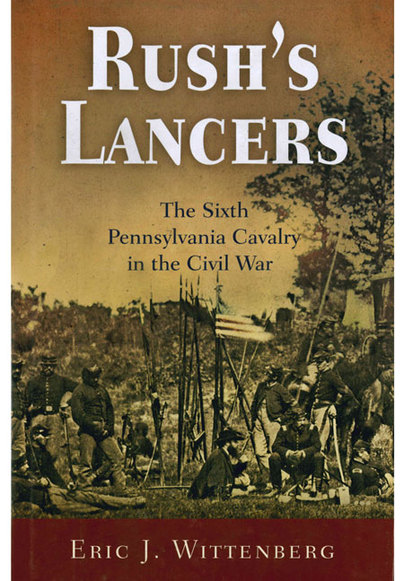 The Sixth Pennsylvania Cavalry in the Civil War

Add to Basket
Add to Wishlist
You'll be £25.00 closer to your next £10.00 credit when you purchase Rush's Lancers. What's this?
+£4.50 UK Delivery or free UK delivery if order is over £35
(click here for international delivery rates)

Rush's LancersLancers, was a completely volunteer unit and one of the finest regiments to serve in the Civil War. Tracing their history from George Washington's personal body guard during the Revolutionary War, many of the men of the Sixth Pennsylvania were the cream of Philadelphia society, including Richard H. Rush, grandson of Dr. Benjamin Rush, Maj. Robert Morris, Jr., great-grandson of the financier of the Revolutionary War.

But it was their actions in battle, not their illustrious family histories, that distinguished Rush's Lancers. The Sixth Pennsylvania Cavalry earned a reputation for being a highly trained and reliable unit, despite being armed initially with antiquated weapons, leaving their mark on key battlefields, including Hanover Court House, Antietam, Fredericksburg, Chancellorsville, Gettysburg, Brandy Station—where they conducted one of the most famous charges of the war—and Appomattox. Drawing upon letters, diaries, memoirs, service and pension files, contemporary newspaper coverage, official records, and other primary sources, Rush's Lancers: The Sixth Pennsylvania Cavalry in the Civil War by distinguished military historian Eric J. Wittenberg is an engrossing account of these young men from both Philadelphia's social elite and the city's working classes who, despite not being professional soldiers, answered the Nation's call to war.