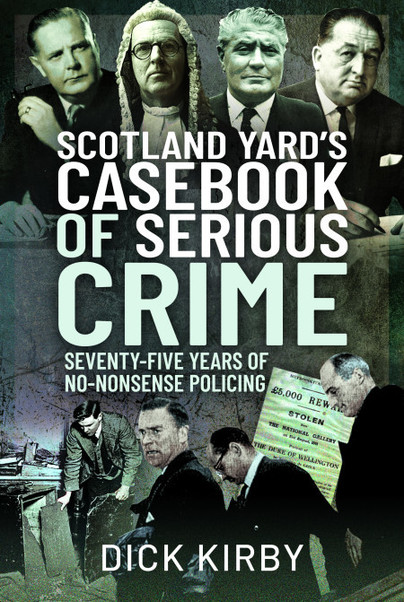 Add to Basket
Add to Wishlist
You'll be £15.99 closer to your next £10.00 credit when you purchase Scotland Yard’s Casebook of Serious Crime. What's this?
+£4.50 UK Delivery or free UK delivery if order is over £35
(click here for international delivery rates)

Times change and not always for the better. Dick Kirby, a former experienced Met detective and now best-selling author, maintains that the current politically correct culture coupled with an inept Crown Prosecution Service and aided and abetted by the Police & Criminal Evidence Act, has slowed the pursuit of criminals and justice to a snail’s pace.

As this gripping book clearly demonstrates it was not always so. During the 20th Century, uniformed officers were visibly part of the community, patrolling their beats and protecting the public’s property. Detectives detected, cultivated informants and, like their uniform counterparts, knew the characters on their manor. What’s more, they were backed by their senior officers, who had on-the-job experience.

I received this book to review and I am so grateful as this is an excellent book! Well researched and well written, I could not put it down. The written style is easy to follow and I would recommend to people who enjoy reading books about real life crime and the history of the police. This author was new to me, however I will be reading other books by this author on future.

Justice seems to move at a snails pace - but this was not always the case! Take a step back in time through the eyes of a member of Scotland Yard, and see how policing used to be!
For lovers of true crime, this book is PERFECT! I absolutely loved reading about the cases, the sentences meted out, and the no-nonsense take of the author in discussing both crime and criminal.

As a lover of true crime this book was right up my alley and I would like to give a big big thank you to the publishers for granting my wish for this book.
This true crime book was written by a former and very experienced Detective in the London Met as well as a true crime writer and he uses this platform to illustrate through the crimes that he discusses how factors such as political correctness, amongst others, have changed the way policing is carried out, how crime is revied and how crimes are responded too by both officials, media and members of the public.
I loved that he put the lesser-known crimes in the book instead of just talking about the same old recycled crimes that a lot of crime writers, bloggers, vloggers etc go into, this was a refreshing change. I also loved the humour that he brought which was a bit of light hearted relief at times and didn’t take anything away from the seriousness of the crimes – although some of the crimes in themselves were quite laughable.

I would recommend this to non-fiction crime lovers and also lovers of crime fiction that want to try something new but still crime related.

Another good true crime read by Dick Kirby, about the ins and outs of policing over the last 75 years. Well researched and full of cases, I enjoyed this one a lot. Many great stories about this time period regarding the pursuit of criminals.


Dick Kirby is a former experienced Met detective and it's really interesting to hear his take on these cases. Several years ago I read another of his works, Whitechapel's Sherlock Holmes: The Casebook of Fred Wensley and really enjoyed that one. In this book Mr. Kirby has chosen a number of cases, some well known others less so and walks us through the various methods used by the police in order to track down the criminals. He is a very engaging narrator and I really enjoyed this book, it is a very engrossing read and fairly easy to read. I would really recommend this book, and will definitely look into more by him. It is perfect for fans of true crime.

Comparing and contrasting policing in the 20th century with the present time and political climate is interesting and revealing. I recommend this book for Nonfiction crime readers, as well as those interested in human nature and the progression and regression of society over the past century. Be sure to read the glossary at the back, too, for definitions on birching, lagging, punishment diets and so on. The photographs are a great addition...I love when they are included for visual people like me.

Scotland Yard's Casebook of Serious Crime is another book by prolific and very entertaining True Crime author Dick Kirby. Mr Kirby is a former long-serving policeman from "the old days" when criminals lived in fear of the law and and its officers were not required to consider the "human rights" of those with no regard for those of others. That is the theme of this particular book when far from there "never being a policeman around when you want one" officers of the law were in earlier times were "out there" actively looking for potential law-breakers. Coincidentally before reading this book i was talking to my Dad about his days as a young lad in post-war London where the local beat constable was liable to appear "anywhere at any time" and was happy to oblige anyone who thought they take him on in a fight. That's Dick Kirby's style of policing and in his usual ( I'm a big fan and have read most of his books) acerbic and blunt manner he again highlights his disgust with the state of today's criminal justice system.

Like most of Dick Kirby's books this is basically a collection of anecdotes featuring the mad,bad,dangerous to know and merely hapless exploits of the criminal classes and those tasked with bringing them to justice. As ever it's a great read and an insight into a kind of policing that has been replaced with one that has made life a lot easier for criminals and is a career where it's not actually essential to have done any actual police work to progress rapidly.

This book was informative and really fascinating to read.
A great read if you like true information.
5*