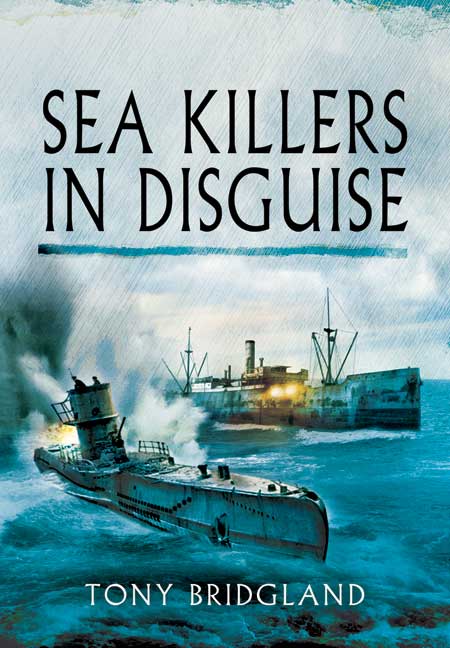 Add to Basket
Add to Wishlist
You'll be £14.99 closer to your next £10.00 credit when you purchase Sea Killers In Disguise. What's this?
+£4.50 UK Delivery or free UK delivery if order is over £35
(click here for international delivery rates)

This is the remarkable story of what were known by the British as 'Q' Ships and by the Germans as ‘Decoy Raiders’. Disguised as harmless merchant ships, they could be transformed in moments into powerful killers and were used by both sides in the First World War. The book describes the extraordinary lengths that both sides went to ensure secrecy and deception. Voyages often lasted several years without returning to port. Owing to the nature of the game, evidence regarding their work is hard to come by but Tony Bridgland has produced a fascinating piece of detective history.

The author is to be congratulated for producing a very readable account. An excellent account of the use of armed disguised merchant ships by the British and German navies during the First World War. A very good read and therefore recommended.

The story of Q-Ships and the seafarers who sailed in them is detailed in Sea Killers in Disguise (Pen and Sword ｣14.99) by historian Tony Bridgland, who lives in Rye.

This is a brilliantly researched book and makes a fascinating read. I would very highly recommend it to our readers.

During the Napoleonic Wars, sea captains from Dover and Folkestone were licensed by the British government to act as privateers to capture French shipping in the English Channel. On the other side of the Channel the French adopted similar privateering tactics against British shipping.

In 1811, a seafarer suggests a scheme to free the English Channel of troublesome French privateers.

His idea was to rig up a couple of innocent-looking merchant ships with concealed guns to surprise any French marauders.

The concept of decoy ships – or Q-ships as they became known – was not an original idea but was taken up by the British Admiralty in the First World War.

The story of Q-Ships and the seafarers who sailed in them is detailed in Sea Killers in Disguise (Pen and Sword £14.99) by historian Tony Bridgland, who lives in Rye.

He recalls how in the First World War Germany tried to starve Britain into submission by submarine warfare.

In just one month 880,000 tons of British shipping was sent to the seabed.

Winston Churchill First Lord of the Admiralty, in 1914 ordered the concealed arming of a Q-ship with a couple of twelve-pounders to trap any German submarines that surfaced attack.

The idea worked as a result hundreds of British merchant ships, ranging from cargo liners to fishing smacks, served as Q-ships.

These ships had to be sufficiently disguised to lure a U-boat captain to approach with a sense of false security to come within range of the guns. Cast-iron discipline was required as the enemy crept nearer.

The Germans were not slow in copying the idea for its surface raiders and the author tells of the successful voyage of the decoy raider The Black Wolf, a converted freighter, in 1916.

Even more remarkable is the story of the voyage of the German raider, The Eagle of the Sea, a captured 1,600-ton clipper ship, that outwitted the British until smashed to pieces in a tidal wave in the pacific.

This is a brilliantly researched book that makes a fascinating read. I would very highly recommend it to our readers.

Tony Bridgland is an avid military historian with a keen nose for a good story and the ability to tell it well. Previously published works include Field Gun Jack versus The Boers, Sea Killers in Disguise and Naval Atrocities at Sea 1939-1945.