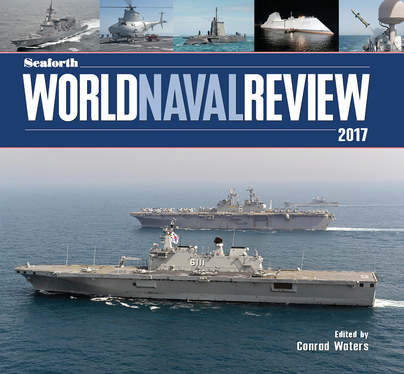 Click here for help on how to download our eBooks
Add to Basket
Add to Wishlist
You'll be £12.00 closer to your next £10.00 credit when you purchase Seaforth World Naval Review 2017. What's this?
Need a currency converter? Check XE.com for live rates

This annual has an established reputation as an authoritative but affordable summary of all that has happened in the naval world in the previous twelve months. It combines regional surveys with one-off major articles on noteworthy new ships and other important developments. Besides the latest warship projects, it also looks at wider issues of importance to navies, such as aviation and electronics, and calls on expertise from around the globe to give a balanced picture of what is going on and to interpret its significance.

Features of this edition include an in-depth analysis of the Royal Netherlands Navy, while Significant Ships will cover the USN’s radical new Zumwalt class destroyers, the Republic of Korea’s amphibious assault ship Dokdo, and the JMSDF’s Akizuki class destroyers, among others. There are also technological reviews dealing with naval aviation by David Hobbs (with a focus on the present state of the RN’s Fleet Air Arm), while Norman Friedman surveys naval surface-to-surface missiles.

This book offers an excellent summary of the world’s current naval situation. It is recommended for any library or personal collection dealing with modern navies.

For several years I have had the privilege and pleasure of reviewing the successive Annuals in this series, the 2017 edition is the usual very high standard.
Highly recommended once more.

This annual has an established reputation as an authoritative summary of all that has happened in the naval world in the previous 12 months.

Essential reading for anyone with a serious interest in contemporary naval affairs.

The Seaforth annual ‘World Naval Review’ consistently pushes the inherent limitations of our understanding of naval affairs by discussing the hows and wherefores that underpin the implementation of naval technology in our current operating environment. The 2017 edition is somewhat special as it is perhaps indicative of an inflection point in naval strategic outlook that is already impacting upon naval ships, systems and equipments. ‘Seaforth World Naval Review 2017’ is highly recommended for those who need to keep pace with recent naval developments and who, like most of us, do not have the time available to undertake extensive research themselves.

The 192-page landscape format is handsomely produced to Seaforth's usual high standards and is copiously illustrated with many photographs, both black and white and colour, and excellent drawings provided by John Jordan. The book is designed to appeal to a wide market, including enthusiasts who can keep more or less up to date through it, as well as more serious students of naval affairs.

The Seaforth annual continues as a must for all those wishing to keep up with world naval affairs, it is excellent value and strongly recommended.

Split into four main sections, this fascinating book examines trends in maritime strategy and geopolitics over the part year, as well as focusing on issues of particular interest - including technological advances and significant new ships.

... this is a marvellous asset for those wishing to keep up to date with naval matters. Very highly recommended.

The Seaforth imprint of Pen & Sword has a well-deserved reputation for producing fine studies of naval technology and action. The publication of the latest annual World Naval Review is an eagerly awaited event. The group of respected specialist authors is again under the editorship of Conrad Waters and have provided an absorbing selection of articles. Highly Recommended

As featured on la Cordeliere.

All in all, it is a very practical tool with a well-balanced balance between the world-wide panorama, which allows one to take in almost all the navies while at the same time putting forward a few Monographs. It is a compromise between a complete work - and therefore with a price proportional to the effort provided - and a personal work of strategic intelligence.

This is an extraordinarily useful annual from the point of view of a comprehensive update on the world’s navies, principally in the domain of construction and acquisition. The authors are particularly good at sketching in the political, strategic, and procurement background of each country dealt with. There is a clear picture, out to generally a five-year horizon, of what countries will be able to deploy.

The first half of the book is devoted to a review by region including specifics on the navies of Malaysia, the Netherlands and Denmark. In each section a distinction is drawn between ocean-going blue-water 'real' navies with global reach, ability to shrug off an air threat, and an organic offensive capability on the one hand, and then minor navies who are either optimised as allies of larger nations, or as contributors to coalitions, and then those that are really only constabulary outfits. Even these last, given modern missile technology, can inflict a nasty sting within their littoral. The leading features for me are the imminent USS Gerald R Ford (whose much decried EMALS catapult system appears to have bedded down, and the subject of an immediate recent visit by President Trump) and China's own-build PLAN aircraft carriers - one emerging and more to come. Under the sea there are other stories - the ownership of submarines seems steadily to grow, with cast-off Kilos popular with navies with historic relationships with the USSR. Expanding emerging navies are seen to have a problem where earlier penny-number purchases of varied types have left an awkward maintenance legacy whose costs erode future purchasing capability. Some of these seem to manage with very few people compared to the numbers of ships. Backgrounds include the inefficiency of India's purchasing process and Russia's dependency on now-non-available Ukrainian gas turbines. Everybody is squeezed for money.

Of the individual ship classes documented, the most interesting for me was the USS Zumwalt, one of three very futuristic 18,000 ton ships currently emerging from a $20bn development project. The discussions of its systems, including its Rolls Royce generators and gas turbines, and the ship's very high levels of automation are particularly informative.

The last quarter of the book is equipment-focused with sections on naval aviation (by the top expert, David Hobbs), ship-to-ship missiles, and submarine rescue.

Production values are very good with an excellent selection of photographs. Will it fit your bookcase? Dimensions are 26.5 x 25 mm.

This series is a key resource for keeping up, whether in cabin or armchair. In America it is published by the US Naval Institute - that's quite some recommendation. Well done Seaforth.