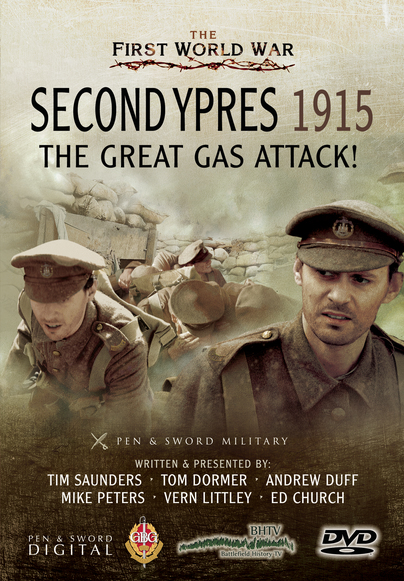 The Second Battle of Ypres was a battle of the First World War fought from 21 April–25 May 1915 for control of the strategic Flemish town of Ypres in western Belgium, following the First Battle of Ypres the previous autumn. It marked the first mass use by Germany of poison gas on the Western Front. For the first time a former colonial force (the 1st Canadian Division) defeated a European power (the German Empire) on European soil, in the Battle of St. Julien and the Battle of Kitcheners' Wood.

In the now established BHTV style, Battlefield guides Tim Saunders and Andrew Duff join a selection of historians on the ground to explore the actions of Second Ypres and analyse the significance of what was the first former colonial victory on European soil. The team explain the bravery shown by the troops on the ground and the horrors they faced from the advancing German gas clouds.

The most important thing about these series of documentaries from Pen and Sword, is that they bring to life elements of the battlefield that would be impossible capture, even in the most descriptive book. This is because they are delivered on the ground, by top military historians and guides. The film is written and presented by Tim Saunders, Tom Dormer, Andrew Duff, Mike Peters, Paul Oldfield and Ed Church. Throughout, you feel as if you are on the battlefields with these men, having the detail explained to you. It is presented in a very professional, but also relaxed and inclusive manner, which you would expect on a battlefield tour.... Overall, for any military enthusiast, this is a superb dvd to watch.