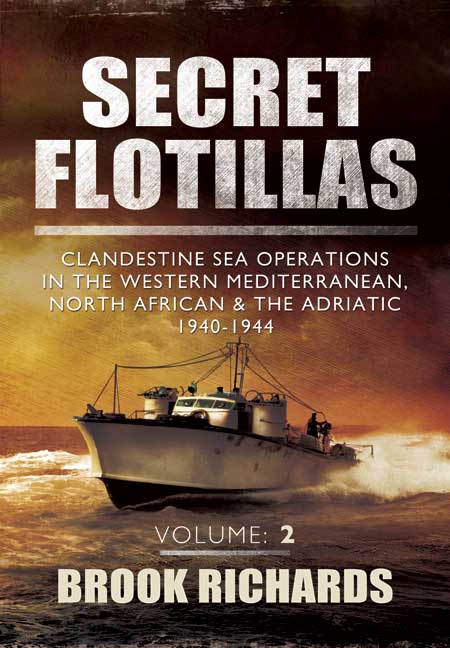 Add to Basket
Add to Wishlist
You'll be £15.99 closer to your next £10.00 credit when you purchase Secret Flotillas Vol II. What's this?
+£4.50 UK Delivery or free UK delivery if order is over £35
(click here for international delivery rates)

This authoritative publication by the official historian, the late Sir Brooks Richards, vividly describes and analyses the clandestine naval operations that took place during World War II. The account has been made possible through Sir Brooks' access to closed government archives, combined with his own wartime experiences and the recollections of many of those involved.

In addition to operations off French North Africa this second volume also includes descriptions of operations in the Adriatic around Italy. More than half of the 390 operations in Italian and adjacent waters were carried out by Italian vessels with Italian crews. It was a contribution to the Allied war effort which ought not to be forgotten.

A new, revised and greatly expanded edition’
‘Exciting to read’

A new, revised and greatly expanded edition.
Exciting to read.

Sir brooks Richards has written about a little known and even lesser researched area of clandestine warfare using small craft to evacuate personnel, land agents and generally cause mayhem in occupied/enemy territories in the Mediterranean.

dry account. It provides excitement and intrigue in a very readable style that concludes with all of the tables that should be included into a source work. There is illustration, confined to a B&W plate section and a few maps in the body of the book, but the illustration fully supports the unique content. Although the author did not begin writing the book until the 1990s, he had the great advantage of SOE service in the area during WWII. This personal direct involvement in the story may account for the lively and authoritative style, where a personal perspective must have been of enormous assistance in working through the restricted files that he was given access to. The resulting history is outstanding and a classic that will be of great value as long as readers have an interest in many subjects that combine into the story.