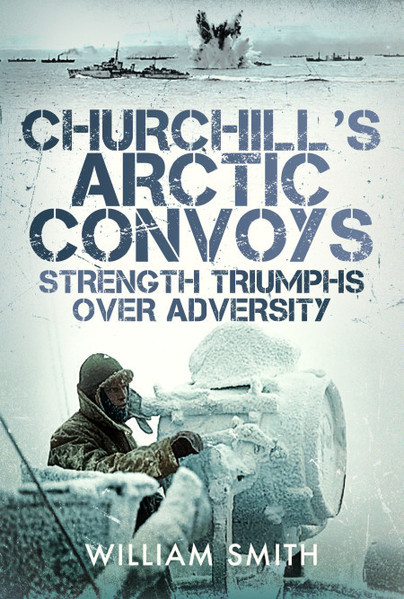 Preorder
Add to Wishlist
You'll be £17.50 closer to your next £10.00 credit when you purchase Churchill's Arctic Convoys. What's this?
+£4.50 UK Delivery or free UK delivery if order is over £35
(click here for international delivery rates)

Order within the next 7 hours, 14 minutes to get your order processed the next working day!

The early sailings to Northern Russia via the Arctic Ocean between August 1941 and February 1942 were largely unopposed. But this changed dramatically during the course of 1942 when German naval and air operations inflicted heavy losses on both merchantmen and their escorts. Problems were exacerbated by the need to divert Royal Navy warships to support the North African landing.

Strained Anglo-Soviet relations coupled with mounting losses and atrocious weather and sea conditions led to the near termination of the programme in early 1943. Again, competing operational priorities, namely the invasion of Sicily and preparations for D-Day, affected the convoy schedules. In the event, despite often crippling losses of lives, ships and supplies, the convoys continued until shortly before VE-Day.

This thoroughly researched and comprehensive account examines both the political, maritime and logistic aspects of the Arctic convoy campaign. Controversially it reveals that the losses of merchant vessels were significantly greater than hitherto understood.

While Churchill may not have described the convoys as ‘the worst journey in the world’, for the brave men who undertook he mission often at the cost of their lives, it most definitely was.

William Smith is an Open University Honours Graduate and retired Civil Servant with forty-two years’ experience in Royal Naval, Joint Service and NATO logistics. He was seconded for four years to the US Navy liaising on Royal Naval weapon procurement programmes. He also attended the NATO Defence College in Rome.

Encouraged by his maternal grandfather’s Royal Navy service during the Great War and his father’s Second World War Merchant Navy experiences, for which he was decorated, Bill decided to research naval history during his retirement. This book is the result of his particular focus on the Atlantic and Arctic Theatres during the latter conflict.

He and his wife Valerie, who have a son, a daughter and three granddaughters, live in Wiltshire.