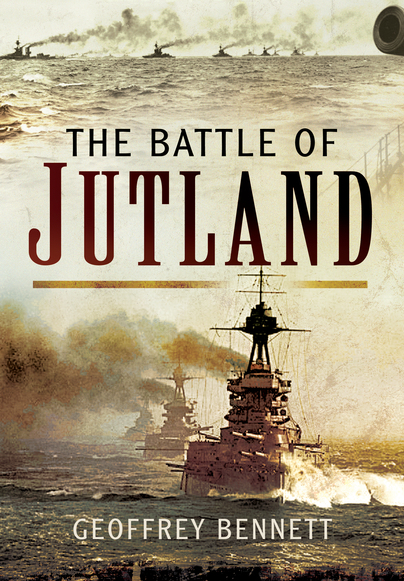 The Battle of Jutland (ePub)

Click here for help on how to download our eBooks
Add to Basket
Add to Wishlist
You'll be £4.99 closer to your next £10.00 credit when you purchase The Battle of Jutland. What's this?
Need a currency converter? Check XE.com for live rates

The Battle of Jutland: At the end of May 1916, a chance encounter with Admiral Hipper's battlecruisers has enabled Beatty to lead the German Battle Fleet into the jaws of Jellicoe's greatly superior force, but darkness had allowed Admiral Scheer to extricate his ships from a potentially disastrous situation. Though inconclusive, at the Battle of Jutland the German Fleet suffered so much damage that it made no further attempt to challenge the Grand Fleet, and the British blockade remained unbroken. Captain Bennett has used sources previously unavailable to historians in his reconstruction of this controversial battle, including the papers of Vice-Admiral Harper explaining why his official record of the battle was not published until 1927, and the secret "Naval Staff Appreciation" of 1922 whose criticism were so scathing that it was never issued to the Fleet. Also included are numerous battle plans, photographs and an introduction by Bennett's son.

Few historians, on land or sea, can match the depth and breadth of the work of Captain Geoffrey Bennett. As a Royal Navy officer who served Great Britain in war and peacetime, his life would be an interesting read. By the end of his life, he was internationally renowned for his writings on both world wars, Lord Nelson, Trafalgar, and a series of novels enjoyed by adult and child alike.

Since its first publication in 1964, this title has re-appeared on three more occasions, the latest being this 2015 paperback. On 31st May 1916, in what was to become the Royal Navy’s first major engagement since Trafalgar, a chance encounter with Admiral Hipper’s battlecruisers enabled Vice Admiral Sir David Beatty to lead the German High Seas Fleet to Admiral Sir John Jellicoe’s Grand Fleet – a greatly superior
force - but darkness allowed Vice Admiral Scheer to extricate his ships from a potentially disastrous situation.

The battle was fought from 31 May to 1 June 1916 in the North Sea, near the coast of Denmark's Jutland Peninsula. It was the largest naval battle and the only full-scale clash of battleships in the Great War.

The German High Seas Fleet's intention was to lure out, trap and destroy a portion of the Grand Fleet, as the German naval force was insufficient to openly engage the entire British fleet. The Royal Navy pursued a strategy to engage and destroy the High Seas Fleet, or keep the German force contained and away from Britain's own shipping lanes.

Fourteen British and eleven German ships were sunk, with great loss of life. After sunset, and throughout the night, Jellicoe manoeuvred to cut the Germans off from their base, hoping to continue the battle the next morning, but as noted above, under the cover of darkness Admiral Scheer broke through the British light forces forming the rear guard of the Grand Fleet and returned to port. Both sides subsequently claimed victory. 2016 marks the centenary of the action and this reprint features an introduction by the author’s son. Some 29 monochrome illustrations are included, along with five maps, as well as the orders of battle for both sides. A short bibliography rounds off what is still a well written story of a major, but ultimately inconclusive, naval action.

While I've been interested in military history since I was a kid, I've never been too keen on naval history. Perhaps it say more about me than about naval history, but I've always found the movements of ships on the sea harder to follow than the movements of armies on land. That is compounded in the case of a battle like Jutland, that even its protagonists found hard to follow.

Yet I was able, more or less, to follow the course of these events in Geoffrey Bennett's book.

The Battle of Jutland was inconclusive with victory claimed by both sides. However, the German Fleet suffered sufficient damage that they would never again attempt to challenge the Royal Navy Grand Fleet, and so the British blockade on German remained intact (as indeed it did for some time after the War ended), inflicted a great deal of suffering on Germany’s population.

Geoffrey Bennett had researched his subject well, and the illustrations in the book are very good. The fact that Bennett served in the Royal Navy from 1923 to 1958 gives the book an insider authenticity that really grips the reader. Bennett isn’t a flowery writer rather he has an efficient style that makes every word count. Further, his quote from actual participants add nuance to the book.

I would say that anyone interested in this particular battle should read as much as possible about it, including German accounts, but this book is an essential part of that reading.