Add to Basket
Add to Wishlist
You'll be £17.50 closer to your next £10.00 credit when you purchase Secret War. What's this?
+£4.50 UK Delivery or free UK delivery if order is over £35
(click here for international delivery rates)

What did SOE really achieve during the Second World War? Why were so many agents parachuted into enemy hands? Who chose to back Communist guerrillas in Yugoslavia, Hungary, Romania, Albania, Greece and Malaya in preference to other anti-Axis movements? In this new and revised edition Nigel West strips away the secrecy that has surrounded the Special Operations Executive since it was officially wound up in 1946, and reveal the breath-taking political naivety, operational incompetence and ruthless manipulation. Despite the heroism of individual agents who suffered appalling privation to further the organisation’s dubious objectives, there is an underlying tragedy of dreadful proportions.

Secret War is a detailed analysis of SOE’s structure and performance and describes its successes and failures across the globe. The book casts doubt on the official histories authorised by the Cabinet Office and offers evidence of the setbacks that jeopardized D-Day and gives an account of the paramilitary units dropped behind enemy lines immediately after the invasion which saved SOE’s reputation.

This book is a highly provocative but authoritative history of the organisation that existed for less than six years but was to have a lasting impact on the world’s post-war development.

"...an exceptionally well-researched book, with extensive detail on multiple code-name operations and the principal personalities involved in those operations."

The International Journal of Intelligence and Counterintelligence, March 2022

Britain's wartime Special Operations Executive (SOE) was formed to encourage resistance in enemy occupied countries. A cloak and dagger organisation. The agents inserted behind the lines, were the tip of the dagger. To some, this type of warfare seemed ungentlemanly. It was OK for foreigners but frowned upon when similar Home units were trained in the event of a successful German invasion of Britain.

The swift German Blitzkrieg which swept across Europe in1939, caught Britian's Secret Intelligence Service unprepared. Last minute attempts were made to make local contacts and create secret weapon dumps ahead of the German advance. This was to seed embryo resistant groups in German occupied Europe. For more than fifty years it's story, because of a government embargo, remained unwritten. Some Agents wrote their wartime experience describing parachute drops, being flown into Europe in small Lysanders, or going ashore from small boats and submarines. Many were caught, tortured, or murdered in German concentration camps.
Nigel West and I were coincidently and separately, researching SOE in 1992. My field was SE Asia; he wrote an excellent book and in this new edition Nigel West strips away the secrecy that has surrounded Special Operations Executive to reveal the political naivety, operational incompetence of those which created it.

In addition to describing SOE's ruthless war, the book has a detailed analysis of SOE's structure and performance, describing its successes and failures across the globe including operations in the Far East. This was an often-overlooked war zone, manned by The Forgotten Army where European agents stood out like sore thumb. In Asia contacts were often made with anti-colonial and communist organisation in India, Malaya, Burma, Dutch East Indies, and French Indochina, which, in post war Asia, sought to free their countries from European control

This is a page turning, highly provocative and authoritative work, of an organisation which existed for five years but left a legacy of political unrest in those countries in which it fought.

The author has been described as the official historian to the British intelligence services and this book about the SOE provides a wealth of facts from a very shadowy organization. The evacuation from the beaches of Dunkirk and Churchill replacing Chamberlain saw a new aggressive posture against the Germans and efforts to take the war to them in Occupied Europe and then the Balkans – Very Highly Recommended.

The SOE has an awesome reputation, of course, but author Nigel West strips its reputation bare and reveals the true history of the occasional failures and mistakes. On balance, the successes and the attempts outweigh the follies and the heartache, though, and as one who revelled in the adventures of people such as Violette Szabo, I found this account of the SOE particularly engaging and fascinating.

A very good account of the exploits of the SOE that brings some balance to its actions by charting the failures as well as the successes. Well researched and presented as you might expect from Nigel West, it is a cracking good read. 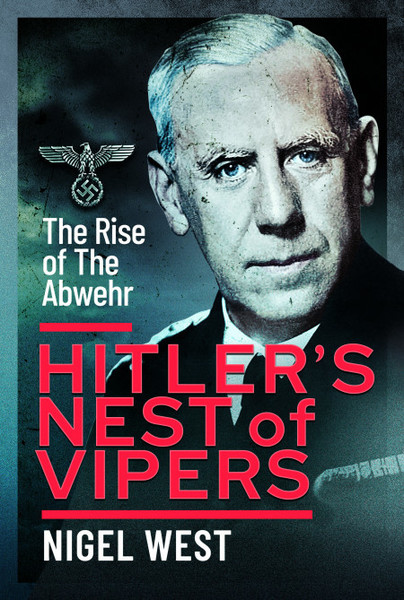 Hitler's Nest of Vipers The Rise Of The Abwehr (Hardback)

Modern historians have consistently condemned the Abwehr, Germany’s military intelligence service, and its SS equivalent, the Sicherheitsdienst (SD), as incompetent and even corrupt organizations. However, newly declassified MI5, CIA and US Counterintelligence Corps files shed a very different light on the structure, control and capabilities of the German intelligence machine in Europe, South America, the Mediterranean and the Middle East. It is usually stated that, under Admiral Canaris, the Abwehr neglected its main functions, its attention being focused more on trying to bring down Hitler.…

Click here to buy both titles for £35.00
More titles by Nigel West
Preorder