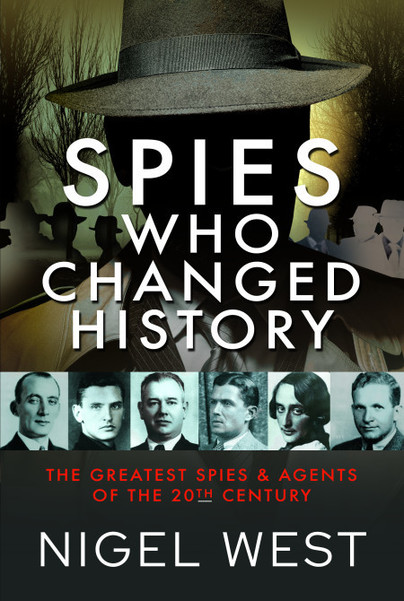 The Greatest Spies and Agents of the 20th Century

Preorder
Add to Wishlist
You'll be £20.00 closer to your next £10.00 credit when you purchase Spies Who Changed History. What's this?
+£4.50 UK Delivery or free UK delivery if order is over £40
(click here for international delivery rates)

Spies have made an extraordinary impact on the history of the 20th Century, but fourteen in particular can be said to have been demonstrably important. As one might expect, few are household names, and it is only with the benefit of recently declassified files that we can now fully appreciate the nature of their contribution.

The criteria for selection have been the degree to which each can now be seen to have had a very definite influence on a specific course of events, either directly, by passing vital classified material, or indirectly, by organizing or managing a group of spies. Those selected were active in the First World War, the inter-war period, the Second World War, the Cold War and even the post-Cold War era.

These include Walther Dewé who formed a spy ring in German-occupied Belgium during the First World War. This train-watching network, known as ‘White Lady’, reported on German troop deployments and possible weaknesses in the German defences. Extending its operations into northern France, the ring provided 75 per cent of the information received by GHQ, British Expeditionary Force. By the time of the Armistice in 1918, Dewé’s group had a staggering 1,300 members.

Olga Gray, the 27-year-old daughter of a Daily Mail journalist, was employed as a secretary by the Communist Party of Great Britain. In 1931 she undertook a mission for MI5 to penetrate the organization and discover its secret channel of communication with Moscow. Gray learned that the Party’s cipher was based on Treasure Island and this breakthrough enabled the Party’s messages to be read by Whitehall cryptographers.

Renato Levi, an Italian playboy, was the longest-serving British agent of the Second World War and is credited with creating the concept of strategic deception. While operating in Cairo as a double agent working for the Abwehr and the British he was instrumental in misleading the Axis about Allied strength across the Middle East and helped Montgomery achieve his victory over Rommel’s Afrika Korps at El Alamein. So successful was Levi in this and other deceptions, he was employed to persuade the Germans that the D-Day landings in Normandy were a diversionary feint, in anticipation of an invasion in the Pas-de-Calais.

These, and other surprising stories, are revealed in this fascinating insight into a secret world inhabited by mysterious and shadowy characters, all of whom, though larger than life, really did exist.


This is a compilation of stories of fourteen very important spies in history. I have a sort of fascination with spies. I love that mysteriousness that surrounds them, so I was excited to read about them and understand them better. I loved reading about Olga Gray, she was so intelligent. All the stories are fascinating and easy to follow and I really enjoyed reading this and learning so many new facts about amazing people. Thank you so much to Netgalley and the author Nigel West for this copy of the ebook! I absolutely think it’s worth checking out if you like learning new and interesting facts and if you love spy movies and shows like me!

Readers who like to read true espionage as well as those who like to supplement their fiction reading with some real-world spies will find a lot to enjoy here. The writing keeps the reader engaged yet covers the available documentation in good detail.

Spies Who Changed History by Nigel West, was put together using correspondence and open government files, interviews etc. they’re not short bios but intricate and detailed stories of each spy they even did one who was a spy while spying for the British let me reiterate he was a British spy who spied on Germany and was a spy for Germany while spying for Britain I hope I explained that right lol! Either way this was a great book they have female spies male spies Austrian spies, Hungarian spies the list goes on and on this was a great book well detailed.

On Monday, 4 March 2019, Sergei Skripal and his 33-year-old daughter Yulia collapsed in the centre of Salisbury in Wiltshire. Both were suffering the effects of A-234, a third-generation Russian-manufactured military grade Novichok nerve agent. As three suspects, all GRU officers, were quickly identified, it was also established that the door handle to the Skripals’ suburban home had been contaminated with the toxin. Whilst the Skripals had lived in the cathedral city for the past seven years, what Sergei’s neighbours did not know was that he had once been a colonel in the Russian Federation’s…