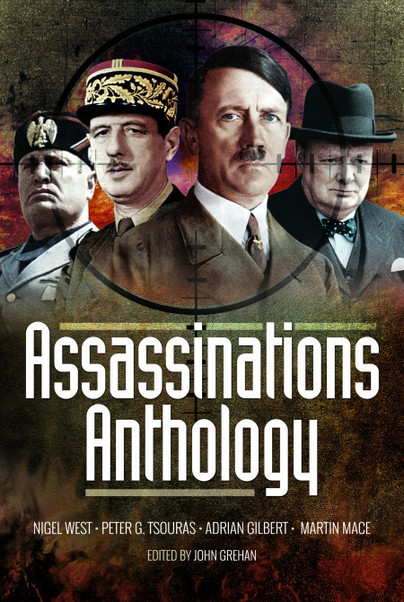 Plots and Murders That Would Have Changed the Course of WW2

Add to Basket
Add to Wishlist
You'll be £19.99 closer to your next £10.00 credit when you purchase Assassinations Anthology. What's this?
+£4.50 UK Delivery or free UK delivery if order is over £35
(click here for international delivery rates)

The infamous ‘Valkyrie’ assassination attempt on Adolf Hitler on 20 July 1944 failed to kill the German Führer. It did not succeed simply because von Stauffenberg’s briefcase containing the explosives was moved behind one of the stout wooden legs of the conference table, resulting in the blast being deflected away from Hitler. It was a very close call, and has led to endless speculation about what might have happened if that briefcase had been placed just a few inches to one side.

There had been many other attempts on Hitler’s life, any one of which could have succeeded and the whole of human history might have taken a different course. If Hitler had died at any stage in the Second World War, would Germany have immediately sued for peace, or would the generals have taken over and fought a far more practical war than the obdurate Führer?

Equally intriguing is the possible failed assassination attempt on General de Gaulle on British soil. Who, one wonders, was behind that scheme, and how would Anglo-French relations have developed if he had been killed? If the aircraft he was to fly on set off just a few minutes earlier would it have crashed to the ground?

In Assassinations Anthology a number of well-known authors and historians have looked at past events where key individuals were involved in either attempts on their lives, or strange incidents occurred which, had they led to their deaths, might have radically affected the outcome of the war. Events surrounding Stalin and Jan Smuts are investigated, as well as the peculiar circumstances relating to the theft of a valuable Gainsborough painting. Just how great a role did the Government’s Chief Whip, David Margesson, play in persuading the MPs to accept the unpopular Winston Churchill as Prime Minister, and what would have happened if Margesson had been killed when the Gainsborough disappeared? It is fascinating stuff.

Grounded in actual events, the various scenarios portrayed in this collection examine the likely chain of events that would have followed if the assassination attempts had succeeded. A few inches, a few minutes – that was all the difference between life and death, and between the past that we know and one that we can only imagine.


Another masterpiece of alternate history from Frontline Publications.

Assassination of War Leaders is as old as history. Taking the head of the enemy can be more productive than launching an invasion. The group of well-known writers have produced a series of accounts of assassination plans and execution, under a sympathetic editor – fascinating read – highly recommended.