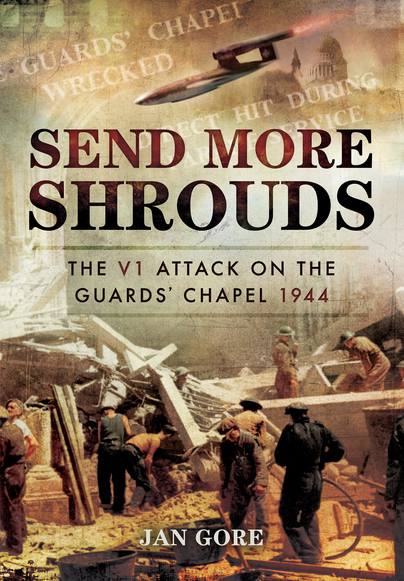 Click here for help on how to download our eBooks
Add to Basket
Add to Wishlist
You'll be £4.99 closer to your next £10.00 credit when you purchase Send More Shrouds. What's this?
Need a currency converter? Check XE.com for live rates

On Sunday 18 June 1944 the congregation assembled for morning service in the Guards’ Chapel in Wellington Barracks, St James’s Park, central London. The service started at 11 am. Lord Hay had read the first lesson, and the ‘Te Deum’ was about to begin, when the noise of a V1 was heard. The engine cut out. There was a brief silence, ‘an intensive blue flash’ and an explosion – and the roof collapsed, burying the congregation in ten feet of rubble.

This was the most deadly V1 attack of the Second World War, and Jan Gore’s painstakingly researched, graphic and moving account of the bombing and the aftermath tells the whole story. In vivid detail she describes the rescue effort which went on, day and night, for two days, and she records the names, circumstances and lives of each of the victims, and explains why they happened to be there.

Her minutely detailed reconstruction of this tragic episode in the V1 campaign against London commemorates the dead and wounded, and it gives us today an absorbing insight into the wartime experience of all those whose lives were affected by it.

This book is so much more than a biography of victims – worthy though such a volume would have been. The author has done an excellent job in describing the impact of the V1 campaign on those involved and the legacy of one particular attack. The work is made that much more impressive though its’ extensive coverage of how the allies became aware of the V1 programme, how they attempted to nullify the implicit threat and, the nature of the response when individual flying bombs hit their target.

Grateful for the sub-title that makes clear this has nothing to do with shroud waving Comrade Corbyn cynically jumping on any passing bandwagon. At the point of the war where the Allies could scent victory over Germany, the V1 began arriving over London. This is a graphic account of the most deadly V1 attack of WWII. Aerial bombing is never a pretty sight, but the use of crude unmanned flying bombs removes all pretence of deliberately targeting military sites. – Highly Recommended.

The V1 was a silent killer. Launched from Nazi bases on the Continent, this unmanned primitive jet propelled rocket, packed with explosive rained down on London and the Home Counties. On a clear day, one could watch their trail in the sky and hear its jet engine as it passed overhead. When it ran out of fuel, the noise of its engine went silent, then it fell. One waited for the explosion. If you were lucky it fell in some field or park but usually they nose-dived into a built-up area wiping out houses and there occupants. It was a terror weapon aimed at civilian targets.

On Sunday 18 June 1944, a V1 fell on the Guard's Chapel in Wellington Barracks, St James Park. The church was packed with military and civilians alike. The author Jan Gore, describes in a well researched book, the horror of the explosion as its walls and roof collapsed burying 300 worshipers in ten foot of rubble, and the four day rescue attempt to find survivors. Added value to this unique reconstruction of the tragic episode, is the list of worshipers in the congregation and what happened to the 100 survivors dug from the rubble.

The Nazi scientists who designed the V1, were captured by an American army unit sent to search for them, and later led the United States team that put a man on the moon!

A good read for anyone interested in those smaller tragic events within the bigger picture and a great example of how to commemorate a 'Microcosm of Society' whose one common experience was the circumstance of their death. All the way through, the narrative is detailed without getting bogged down and, it should be noted, the Appendix, Bibliography & Indices are excellent.

I enjoy books that have been clearly well researched, and this one falls into this category. The author is a historian, rather than a military historian, and has a varied background in the civil service and academia. Although this book focuses on one incident in the campaign of V1 pilotless aircraft attacks on the U.K. in 1944, it commences with an interesting and relevant overview of the nature of the V1, and its context in the Second World War.

There are eight chapters, with the second one providing the background about the design and use of the V1 against the U.K. in 1944. Chapter One covers the moment of the explosion when the V1 hit the Guards’ Chapel, with Chapter Three dealing with the aftermath, and Chapter Four, the rescue. The next three chapters contain biographies of the civilian and military casualties, and those who survived. These are very interesting, as they provide a wealth of information about the cosmopolitan nature of London at the time, and the varied nature of the people who were attending the service in the chapel at the time of the explosion.

The last chapter covers the rebuilding of the chapel, and there is an epilogue. The Appendix provides details of all the victims of the attack. This incident was the single greatest loss of life due to a V1 pilotless aircraft during the war. The reality and circumstances of the incident are both compelling and poignant. The author has an easy to read writing style, that allowed me to glide through the book.

In conclusion, a valuable work, well researched, and well written, that covers not only a specific incident, but a more general aspect of the Second World War, which is rarely covered by other authors. It informed me, and interested me, which is all I can ask of a book. As such, I thoroughly recommend it to interested readers.

Her minutely detailed reconstruction of this tragic episode in the V1 campaign against London commemorates the dead and wounded, and it gives us today an absorbing insight into the wartime experience of all those whose lives were affected by it.

RECOLLECTIONS OF WWII - MEMOIRS & BOOKS WHICH SHOULD BE ON YOUR BOOKSHELF