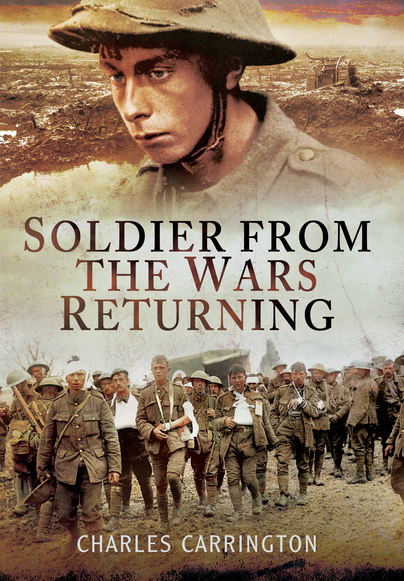 Soldier from the Wars Returning (Paperback)

Add to Basket
Add to Wishlist
You'll be £10.00 closer to your next £10.00 credit when you purchase Soldier from the Wars Returning. What's this?
+£4.50 UK Delivery or free UK delivery if order is over £35
(click here for international delivery rates)

Soldier from the Wars Returning is one of the truest, most profound and readable personal accounts of the Great War. The author waited nearly fifty years before writing it, and the perspective of history enhances its value.

He writes only of the battles in which he participated (including the Somme and Passchendaele), though his comments on affairs beyond his knowledge at the time, through later study and reflection, are pungent and stimulating. Among other topics, he describes the politicians, the generals, Kitchener's Army, Hore-Belisha, German gas attacks, Picardy, dug-outs, tanks, the sex-life of the soldier, scrounging. trench kits and the censoring of letters.

The author saw the First World War from below, as a fighting soldier in a line regiment. In the Second World War he served as a staff officer liaising between the Army and the RAF; serving two tours at RAF Bomber Command HQ at High Wycombe. This equipped him to draw forthright comparisons between the conduct of the two wars.

...a mature and thoughtful book which, using the author’s Great War experience as an officer in the trenches, seeks to examine the war the Great War...

... Without a doubt this is a superb book. It is an honest and fascinating trip into the memories and mind of an officer who fought in the Great War. He made an interesting comment about the boom in war books and the public appetite for them in the nineteen twenties and to which he contributed. It made me smile because it struck a chord with me. Carrington said, “No one but a research worker is now likely to burrow into this pile of seasonal products…” I have news for you Carrington old chap, the readership cannot get enough of the products it seems. Recommended reading.