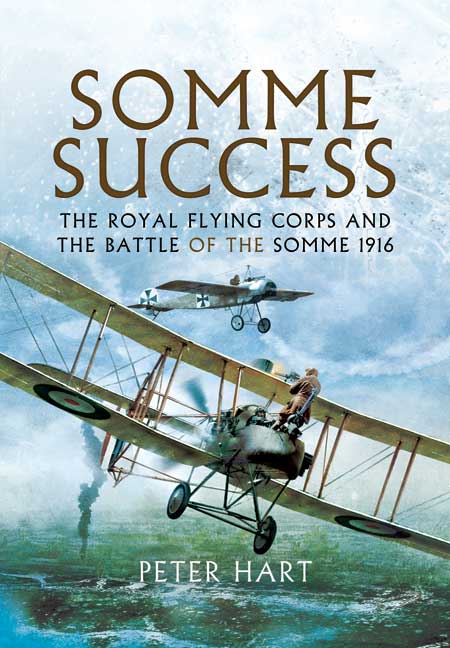 The Royal Flying Corps and the Battle of The Somme 1916

Click here for help on how to download our eBooks
Add to Basket
Add to Wishlist
You'll be £4.99 closer to your next £10.00 credit when you purchase Somme Success. What's this?
Need a currency converter? Check XE.com for live rates

High above the blood soaked trenches of the Somme during the Summer and Autumn of 1916, the Royal Flying Corps were acting out - and winning - one of the first great aerial battles of history.

Even in those pioneering days of flying, primitive aircraft flown by brave young men were of significant military value. Before the battle, photographic reconnaissance aircraft from both sides were desperately trying to map the opposition's deployment. Artillery spotting aircraft were proving invaluable in directing devastating fire onto otherwise hidden targets. Bombing raids became a normal routine.

Somme Success is a highly effective description of all facets of air operations of the period. It uses the voices and accounts of those who were there. It describes how the RFC met the Fokker scourge head on using DH2 single seaters and, later, the ubiquitous FE2B two seaters, of the type that German 'Ace' Max Immelmann was shot down by.

Having conceded air supremacy to the RFC early in the offensive, the German Air Service launched an aerial counter-attack during August and September. The elite scout squadron led by Oswald Boelcke raised the stakes and their Albatross single seaters proved superior to any allied aircraft. Richthofen then appeared on the scene and a new period of German supremacy began.

This is a thrilling account of the dramatic events of the period and an insight into the 'glamorous' world of the Great Aces.


This is a good book for anyone looking for a different perspective to the Battle of the Somme or interested in narrative and oral histories of the Great War. It is a wonderful overview to aerial combat and a good exploration of air force diaries. Hart makes no attempt to deal with the historiography of war but provides an interesting and valuable narrative of the learning curve of the early days of air warfare which adds to any understanding of the Battle of the Somme.

Another dimension of the Somme battles by an established British historian.

This is a fascinating book, looking at the air war over the Western Front in a far more relevant way than is often the case. Most air operations were planned around the fighting on the ground, but that aspect is rarely given enough emphasis in books on the aircraft of the First World War, so the clear connection between the two that is made here is of great value.

It is well said that you should never judge a book by its cover, however you may safely make an exception in this case, as the marvellously evocative depiction of a Fokker Eindekker in combat with a FE2v is fully matched by the content of this really excellent book.

I thoroughly enjoyed this book and would recommend it both to serious scholars of WW1 aviation history but also to those just embarking on a study of this ever-fascinating topic and indeed anyone who wishes to be informed, enlightened and entertained.

This excellent re-issue shows Pete in fine style with a well paced account of how the Royal Flying Corps contributed to the ‘Big Push’ and what the Germans did about it. If you have had the good sense to read Bloody April and Aces Falling then you will know what to expect with a beautifully balanced package of first hand accounts and analysis meshed with a chronicle of the key events.  In short, this is a gem of a book which brings to life those magnificent men in their flying machines whether they flew under roundel or Maltese cross.

The Battle of the Somme has become synonymous with catastrophe and senseless slaughter, with the initial assault resulting in the heaviest loss of life ever suffered by the British Army in a single day. Yet in the air, there existed an entirely different state of affairs. With the increasing importance of aerial reconnaissance and strategic bombing, the Royal Flying Corps in 1916 were charged with wresting air supremacy over the Somme in the wake of the Fokker scourge. Many of the great aces of the War were involved; Max Immelmann, Oswald Boelcke, Albert Ball and Manfred von Richthofen, and this book, assisted by innumerable first-hand accounts, charts the progress and ultimately the success of the British air offensive on a month by month basis, giving a rich insight into this most prestigious and pioneering form of warfare. It also follows the technological race to develop superior aircraft; the decisive factor in the strides made by the Royal Flying Corps and also the German counter-attack towards the end of the year, in which new machines and better tactics saw a steady reversal in British fortunes.