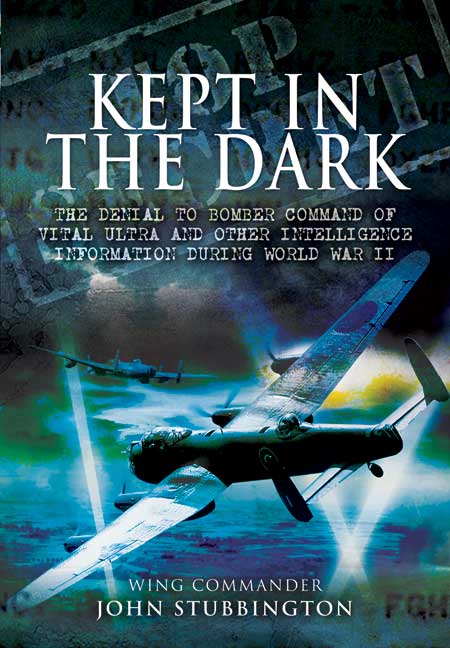 Click here for help on how to download our eBooks
Add to Basket
Add to Wishlist
You'll be £4.99 closer to your next £10.00 credit when you purchase Bomber Command: Kept in the Dark. What's this?
Need a currency converter? Check XE.com for live rates

This fascinating historical revelation goes to the very heart of British and Allied Intelligence during World War II, specifically in the context of planning, control and implementation of the combined bomber offensive against Germany. There are sound arguments based on official archives that the handling of much air intelligence was faulty and reasons to believe that some departments within Whitehall were influenced by parochial and personal attitudes that interfered with the selection of strategic targets and the planning of the bombing offensives. In some
departments within Whitehall and even the Air Ministry, there was a culpable failure to understand and appreciate the operational capabilities and limitations of the RAF and USAAF bomber forces.

After the evacuation of the BEF the only means of destroying the Axis production of arms and munitions fell to the RAF and this was their prime objective for the rest of the war. The destruction of arms factories, power stations, air and ship production was the underlining objective, although when special targets, such as the break-outs of the German navy's major warships and U-Boats were deemed vital, the RAF were expected to react immediately. Much of Britain's intelligence was gathered from the German ENIGMA signals and became known as ULTRA with a security classification of MOST SECRET. Apart from the brilliant work at Bletchley Park there were other inputs from partisans throughout occupied Europe, Allied agents and various forms of reconnaissance. It was a new type of warfare that developed and improved as the war progressed but all too often the bomber squadrons were put into unnecessary peril through imprecise and unthinking demands from the highest levels of government.
John Stubbington graduated from the RAF Technical College in 1961. His career was in Electronic and Defence Intelligence. He worked with Bomber Command, The Electronic Warfare Support Unit, Support Command Signals HQ and the Royal Signals and Radar Establishment. He retired from the RAF in 1985 and worked for twenty years within the UK Defence Industry. He lives near Alton in Hampshire.

Stubbington's book is a refreshingly original approach on a much visited topic. His respect for the bravery and devotion to duty of the men of Bomber Command is evident on every page. This book is highly recommended to anyone with an interest in Bomber Command or in intelligence. Modern students of warfare will also find much interest in the relationship between intelligence and airpower.

This forensic and incisive book by Wing Commander John Stubbington takes a comprehensive view of the intelligence - or lack of it - provided to Bomber Command during the Second World War...

... This is a most insightful book. It draws on a wealth of original research and uses a wide range of sources, and it will inform the historiography of ULTRA and wartime intelligence, and also the controversial history of Bomber Offensive.

This is a volume that requires careful study by anyone with an interest in Bomber Command and its operations. Its 446 pages are crammed with information on the background of intelligence available to Bomber Command.

'Kept in the Dark' is a fascinating historical revelation which looks into the very heart of British and Allied Intelligence during World War II, specifically in the context of planning, control and implementation of the combined bomber offensive against Germany.
This book analyses the different but complementary bombing strategies pursued by the British and the Americans. The broadly accepted current arguments have been that the U.S.A.A.F. went for industrial targets by daylight 'precision' bombing whereas Bomber Command conducted night area bombing of city targets. These 'myths' are turned on their head and show -for the first time - the truth of the matter.
Wing Commander Stubbington has shown that the American 'precision' bombing was not so precise as was claimed. He does this by analysing the aims, the methods, the
results, the evaluation of damage done by various methods - and his conclusions are beyond cavil.
'Kept in the Dark', supported as it is by the most painstaking research, makes for one of the most masterly examinations of the whole question of the strategic bombing of Germany in World War II. If there have been any doubts in people's minds about the absolute necessity of the Allied strategic bombing offensive and the ways in which it was carried out, this book provides the conclusive answer to them.
John Stubbington graduated from the R.A.F. Technical College in 1961. His career was in Electronic and Defence Intelligence. He worked with Bomber Command, The Electronic Warfare Support Unit, Support Command Signals HQ and the Royal Signals and Radar Establishment. He lives near Alton in Hampshire.

Kept in the Dark by Wing Commander John Stubbington. Too often wartime bomber crews were put into unnecessary peril through imprecise and unthinking demands from the highest levels of government, infighting and jealousies between different departments in Whitehall and even within the Armed Forces themselves. This book goes to the very heart of British intelligence at the time - but have things improved?