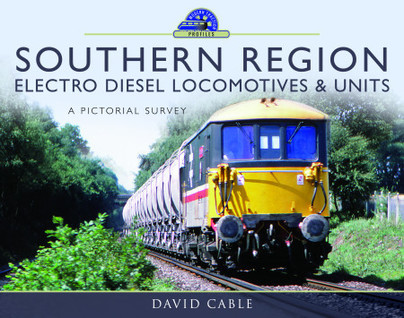 Click here for help on how to download our eBooks
Add to Basket
Add to Wishlist
You'll be £12.00 closer to your next £10.00 credit when you purchase Southern Region Electro Diesel Locomotives and Units. What's this?
Need a currency converter? Check XE.com for live rates

The electro-diesel locomotives and multiple units used by the Southern Region of British Railways, were unique to this region.

The locomotives of class 73 were used extensively throughout the region, in particular on Gatwick Express services, as well as on departmental and track recording trains. Their versatility in being able to work off 3rd rail electricity as well as diesel engined power gave them unrivalled areas of work.

The class 74s, which only had a short life, were seen particularly on boat trains and parcels services on the South Western main line.

The classes 201-3 were 6-car units of narrow bodied construction, so as to be able to work Hastings line services with its restricted clearances.

The other classes 204-207 were 3-car units employed on stopping services throughout the region, but especially in Hampshire and the lines to Uckfield and originally East Grinstead. They were also seen on services in East Sussex and Kent.

This volume shows all the classes at work, in a variety of colour schemes and locations, and has been compiled by David Cable, well known author of a range of books regarding Modern Traction, published by Pen and Sword Books Ltd.


Overall a good photo reference book for modellers of the Southern Region.

It’s a terrific time machine, and an inspiration to those who want Southern without the third rail.

A very interesting book that all fans of British trains, both passengers and merchandise, should not be missed. Thanks to its more than 200 excellent photographs, it allows to know these classes and the landscapes where they circulated.

The late David Cable compiled a fine volume of all the electro-diesel locomotives and multiple units used by the Southern Region of British Railways. The locomotive classes shown here are the 73s, 74s, 201-3 & 204-207. This book shows all these classes at work in a variety of colour schemes and locations.

This book is essentially a collection of photographs of the various locomotives and units that were/are to be found exclusively on the Southern Region area of Britain's railways mainly towards the end of the 20th century. The book tends to concentrate on the Class 73 locomotives in particular, with every possible livery in existence included. There are also some Class 74's included, as well as photos of the Class 201 to 207 units. Each photograph has a short caption underneath giving details of the loco/unit in the photo and the date it was taken. It will be of interest to those railway enthusiasts who are fans of this area of Britain.