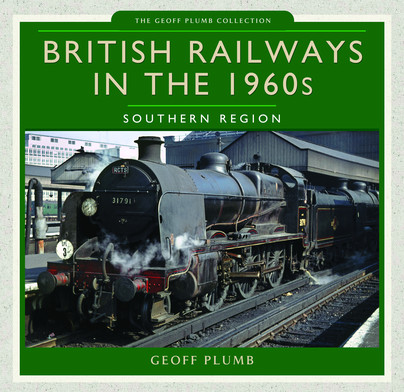 Click here for help on how to download our eBooks
Add to Basket
Add to Wishlist
You'll be £10.00 closer to your next £10.00 credit when you purchase British Railways in the 1960s: Southern Region. What's this?
Need a currency converter? Check XE.com for live rates

After the Second War, Britains railways were rundown and worn out, requiring massive investment and modernisation. The Big Four railway companies were nationalised from 1948, and the newly formed British Railways embarked on a programme of building new Standard steam locomotives to replace older types. These started to come on stream from 1951.

This series of books, 'The Geoff Plumb Collection', is a photographic account of those last few years of the steam locomotives, their decline and replacement during the transition years. Each book covers one of the former Big Four, the Southern Railway, London Midland & Scottish Railway, Great Western Railway and London & North Eastern Railway, including some pictures of the Scottish lines of the LMS and LNER.


Image from book as featured in 'vintage recollections' article

A top transport book in every sense.

A superb photographic celebration of a steam era that ended exactly 50 years ago. For many southern steam enthusiasts, this publication is a real treat. All the favourite main players are well represented – Bulleid's impressive Merchant Navy Pacifics – plus his lighter Pacifics, the equally charismatic West Country and Battle of Britain Classics. The BR Standard Classes are well in evidence, but the book also features many of the, by then, rapidly diminishing older pre-grouping classes.
In a mic of colour images and black and white – with the majority being in colour – it abounds with a rich assortment of locomotives and locations. All the images are full size and in good quality – and superbly convey the nostalgic atmosphere of the last years of Southern Steam.

The latest in the brilliant series of Geoff Plumb's photographic collection showing the last days of British Railways steam, some in glorious colour, the majority in black and white. An amazing collection.

The author has chosen a splendid number of photographs, 143 in color and 17 in black and white, which reflect to a greater or lesser extent and with great fidelity, the end of a period close to transition.