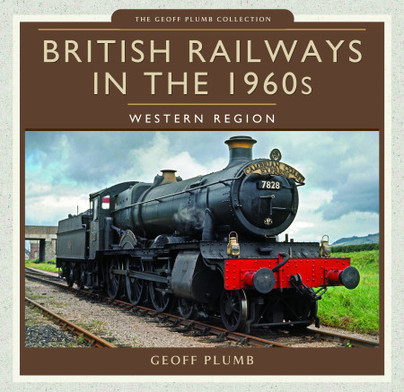 Click here for help on how to download our eBooks
Add to Basket
Add to Wishlist
You'll be £15.59 closer to your next £10.00 credit when you purchase British Railways in the 1960s: Western Region. What's this?
Need a currency converter? Check XE.com for live rates

After the Second World War, Britain’s railways were rundown and worn out, requiring massive investment and modernisation. The ‘Big Four’ railway companies were nationalised from 1948 and the newly formed British Railways embarked on a programme of building new ‘Standard’ steam locomotives to replace older types. These started to come on stream from 1951.

This programme was superseded by the 1955 scheme to dieselise and electrify many lines and so the last loco of the ‘Standard’ types was built in 1960 – and the steam locomotives had been swept entirely from the BR network by 1968.

This series of books, ‘The Geoff Plumb Collection’, is a photographic account of those last few years of the steam locomotives, their decline and replacement during the transition years. Each book covers one of the former ‘Big Four’, in the form of the BR Regions they became: the Southern Railway, London Midland & Scottish Railway, Great Western Railway and London & North Eastern Railway, including some pictures of the Scottish lines of the LMS and LNER.

The books are not intended to convey a complete history of the railways but to illustrate how things were, to a certain extent, in the relatively recent past and impart some information through comprehensive captions, which give a sense of occasion – often a ‘last run’ of a locomotive type or over a stretch of line about to be closed down.

The photos cover large parts of the country, though it was impossible to get everywhere given the overall timetable of just a few years – mainly when the author was still a schoolboy with limited time and disposable income to get around.

Pictures are of the highest quality that could be produced with the equipment then available, but they do reflect real life and real times.

In simple terms, a look at a period not so long ago but now gone forever.


The 1960s were a 'Swan song' for, in particular Western Region steam and fortuitously coincided with not only the wider availability of Colour film, but its affordability, hence Geoff Plumb has liberally illustrated this volume, in his 'Geoff Plumb Collection' series, with a large number of excellent colour illustrations of the then, changing railway scene.

The introductory pages give the back ground to the early life of the author and how/why the collection of photographs were taken and then assembled. The commencement of the book takes the reader on the logical and time honoured route, out of the former GWRs London terminus at Paddington initially westwards/northwest to cover the mainlines out of the capital to Swindon and South Wales before returning to the 'Birmingham' mainline'. I did find it rather strange that the first photograph selected, taken at Paddington in 1963 was of Ex LNER interloper 4472 Flying Scotsman and not a' Castle' when, at the time, (although almost all the Kings had gone), there were a number of still respectably clean Castles rostered on 'The Cathedrals Express'. There is then a 1989 shot taken at Didcot, no doubt to illustrate two ex GWR 4-4-0s in action, but I thought a little out of context and time frame.

The coverage then moves north to Birmingham and beyond, again with some super photographs which I had not seen in print before and where the colour rendition of (no doubt) old slides has stood the test of time well. The North Wales/borders narrow gauge lines are covered with a visit to the Welshpool and Llanfair and Vale of Rheidol Railways. The highlight (for me) is the large number of photographs taken on the 'Cambrian' of ex GWR Manors, in all guises, both clean & workaday condition, taken at numerous locations before they were usurped by the ex LM region standard classes that saw out the end of steam in this part of Wales.

The book is after all one mans collection and we must be thankful that enthusiasts like Geoff Plumb were there at the time, recording scenes for prosperity. Taken individually the (very) extensive photo captions are good.

An excellent album and well worth purchasing.

This is the third photographic album of author Geoff Plumb's series covering British Railways in the 1960s, the first two covering the Southern and the London Midland Regions.
His latest album covers the Western Region, an area that was remote from his home in Sheffield during his childhood years. However as with many photographers of Geoff's generation, a combination of holidays in North Wales and Devon, and a move of the family home to Harrow Weald - close enough to the old Oak Common and Southall - allowed him to start recording the railways scene more widely. He used a 13th birthday present of a camera, then a 14th birthday present of an SLR, taking both colour and black and white.
Most of the pictures are Geoff's own. The photos start in the London area before heading North West and South West in a "zig-zag sort of pattern" to quote the author, with extensive coverage of the former Cambrian Lines from the Welsh border to Aberystwyth, Pwllheli and Carmarthen. Finally, there are some "industrial" scenes, featuring ex-GWR pannier tanks.
The book is well up to Pen and Sword's usual high standard, printed on high-quality gloss paper giving excellent colour and back and white reproduction. But it is the "content" of the photographs that makes this album particularly noteworthy. Geoff has an excellent eye for a photograph and almost without exception they are beautifully composed, showing not just a loco or train, but a generous amount of the immediate surroundings to add interest, and the captions are particularly well-written and informative. The book can be revisited again and again, close examination of the images being most rewarding, particularly when you consider how the railways and the railway scene have changed in so many ways over the years. Look at page 121 for example and spend moments of nostalgia identifying all those cars!
The frequent inclusion of "human interest" adds much to the photos too, sometimes illustrating the lax view of Health and Safety in those days. Look at the example on page 76 - nobody is turning a hair at the unusual method of boarding the train, even allowing for it being a rail tour. Look too at page 78. What a striking composition - a crowd of railwaymen perhaps returning home on the cushions, with a young "spotter" in the foreground ready to write the loco number down once he can see it!
Your reviewer has some personal favourites. Pages 53 & 58 show similar settings, which lead me to wonder what contrasting thoughts might be going through the minds of the elderly gentleman and the young "spotter" both surrounded by derelict locos awaiting the scrapper's torch. And finally on pages 174 and 175. Is the small boy perhaps the driver's son?
So a superb book at a comparatively modest price. Pen & Sword are to be congratulated on yet another fine volume to add to their portfolio. Buy it and wallow in nostalgia, you will not be disappointed!
Let's hope we can look forward to a fourth album to complete the set! The book deserves the highest recommendation.

"Pen & Sword have done a good job of presenting Geoff Plumb’s work in this volume, which is well recommended."

"An enjoyable book particularly for those who can recall steam’s decline in mid and North Wales."

This book brought happy memories of my tea age years train spotting in West London. A very good number of atmospheric photos that give an evocative reminder of the decline of British Railways in the decade