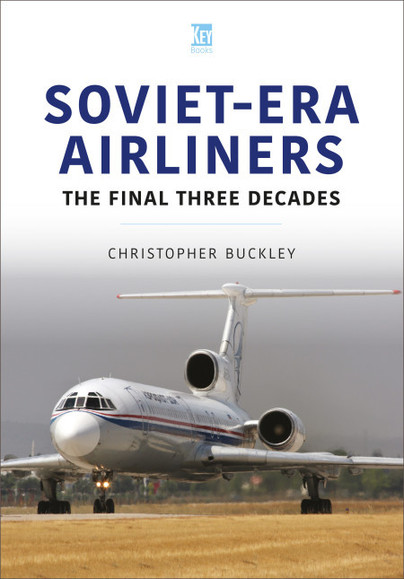 Add to Basket
Add to Wishlist
You'll be £13.59 closer to your next £10.00 credit when you purchase Soviet-Era Airliners. What's this?
+£4.50 UK Delivery or free UK delivery if order is over £35
(click here for international delivery rates)

When the Soviet Union fell in December 1991, there were close to 3,500 assorted Soviet-built airliners that could be deemed operational — more than there had ever been before. The vast majority of these Antonovs, Ilyushins, Tupolevs, and Yaks flew for Aeroflot, and were scattered far and wide at bases across the Soviet Union. Thirty years later, they have almost all disappeared. Now dominated by state-of-the-art Airbuses and Boeings, the world’s airports and airways will never be the same again without the noise, smoke and charisma of these iconic designs from Soviet times.

This book follows the fortunes of the great Soviet airliners over the last three decades and looks at what happened to this immense fleet: the fragmentation of Aeroflot into a myriad of new operators in the 1990s, the bankruptcies and consolidation of so many airlines that followed, and then the slow, inevitable disappearance of these aircraft from our skies. Illustrated with 220 photographs, most of which have never been published before, and supported by many anecdotes, facts and figures, this book conveys the nostalgia and wonder of this special, tumultuous time in aviation history.

When Communism still ruled in Russia it could take three weeks to get a visa in London but there were other capitals where it could be made available in a few hours, on one condition – that you flew Aeroflot, which meant a Soviet aircraft. For many this seemed a price too large to pay but, as the author points out, the fleet was made up of vast numbers of a few ‘standard’ aircraft whose safety record was largely equal to their western equivalents.

Indeed the majority of the Tupolevs, Ilyushians and Antonovs had a requirement for operating from remote and rough airstrips which demanded fairly muscular construction which they often tested daily.

But this book confines itself, as its sub-title indicates, to the three decades immediately following the break-up of the former Soviet Union – which is what makes it so fascinating. Instead of endless repetition of uniform Aeroflot colours this period saw the state company fragment into dozens of localised independent Russian and former Soviet-bloc airlines each sporting its individual livery. This is the key to this enormously illustrated work with an informative narrative to match.

Particularly apposite, and what may come as a surprise to many readers as we witness a war in one of those former Soviet Republics, is just how many of these aircraft were actually built in Ukraine!

A record of an era now past but, despite the omnipresence of Boeing and Airbus, whose shadow still remains.