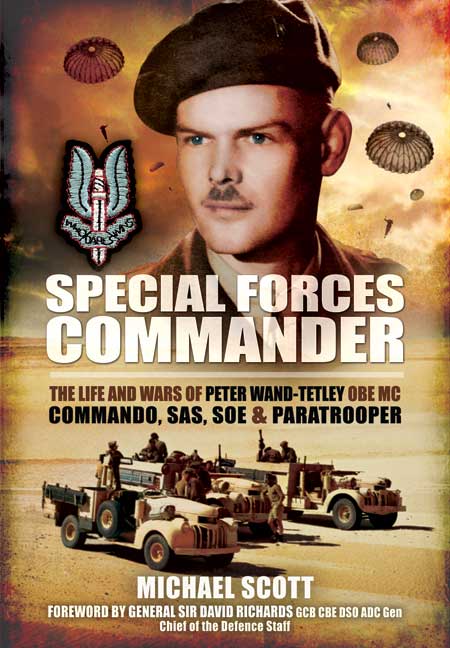 Click here for help on how to download our eBooks
Add to Basket
Add to Wishlist
You'll be £4.99 closer to your next £10.00 credit when you purchase Special Forces Commander. What's this?
Need a currency converter? Check XE.com for live rates

Having initially joined the Wiltshire Regiment, Wand-Tetley immediately volunteered for special service. As a result he was catapulted into a maelstrom of operational service that saw him, first, in action on Commando raids along the North African coastline, and then in fierce fighting on Crete following the German airborne invasion. Raiding operations with the Long Range Desert Group in the Western Desert followed and, as Rommel's Panzerarmee Afrika retreated to Tunisia, he was again in action, this time with the SAS.

Following transfer to the SOE, he was parachuted 'blind' into enemy-held Greece to equip and train andarte guerrillas and was awarded an immediate Military Cross. Following victory in Europe, Wand-Tetley sailed for the Far East with the Parachute Regiment, and was engaged in counterinsurgency operations in Java at the end of the war.

This superbly researched book, written by a serving soldier, is a tribute not only to an exceptional fighting man but to the special
and unconventional units he was part of. As a bonus, his post-war colonial service provides an insight into the break-up of the Empire.

Many accounts of the Special Forces discuss the seemingly endless changes of structure, name and role of the various services, but this account is rare in that it gives us some idea of how disruptive all of this was for the individual soldiers. You could return from a successful mission only to find that your unit was about to be wound up, merged, renamed or in some other way disrupted, and Wand-Tetley had to change service twice to ensure that he remained within the Special Forces world. We also get a reminder of how expensive many of the Commando and SAS raids were, with entire squadrons captured or destroyed on a regular basis.

As a history of one man’s involvement in the multifarious Special Forces that Britain employed in the war, it is an excellent account…
It is a most interesting account, and Marlborough should be proud of a man who contributed well above the average in the last war.

Scott, a colonel in the British Army, has paid a great tribute to the fascinating individual, a larger-than-life character whose reputation as a leader will never be forgotten.

Although the name of Peter Wand-Tetley would mean little to all but a few military historians, his extraordinary wartime career merits closer study as it brought him into contact with nearly the entire spectrum of Britain's Special Forces. The result is an enthralling biography of a unique man and those unorthodox units with which he served. A fine tribute to a man of whom it truly can be said, "He had an interesting war."

Mike Scott is a Colonel in the British Army. He has had full access to Peter Wand-Tetley’s papers and has a superb knowledge of SF Operations and history.