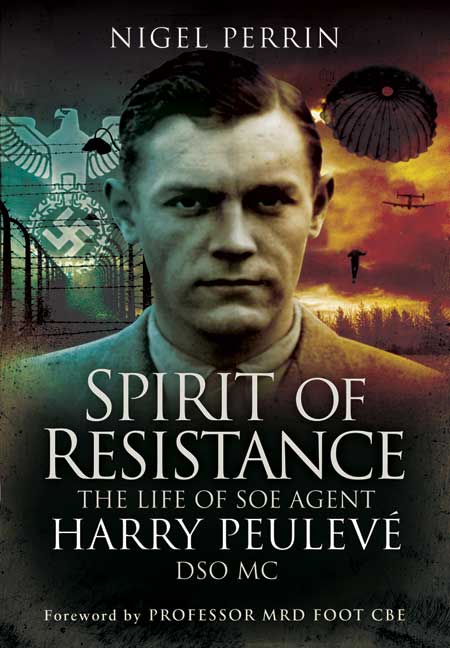 Click here for help on how to download our eBooks
Add to Basket
Add to Wishlist
You'll be £4.99 closer to your next £10.00 credit when you purchase Spirit of Resistance. What's this?
Need a currency converter? Check XE.com for live rates

One of the most determined and courageous secret agents of the Second World War, Harry Peulevé joined the BEF in 1940 before volunteering for F Section of the Special Operations Executive. On his first mission to occupied France to set up the SCIENTIST circuit, he broke his leg on landing and, after numerous close calls, made an heroic crossing of the Pyrenees on sticks in December 1942. Imprisoned, he escaped and eventually returned to England in May 1943.

He formed a close friendship with Violette Szabo before setting out to train a Maquis group in central France. Despite the Gestapo's repeated attempts to catch him he built up a secret army of several thousand resistance fighters. Eventually betrayed and captured, he was tortured at Avenue Foch but never broken. By coincidence he and Violette met while in captivity before Harry was sent to Buchenwald where he not only avoided execution but also managed to escape reaching American lines in April 1945. Sadly Peulevé never fully recovered from his wartime traumas but nothing can detract from his outstanding courage and contribution

This is not a new book but was published in 2008 but is well worth a re-release. It was a coup for the author, for his first book to have the forward written by the late Professor MRD Foot the official historian of SOE who has a number of interesting points based on his huge knowledge of the organisation. “Even in the galaxy of heroes and heroines, muddlers and villains that made up SOE, Harry Peulevé stood out for courage and tenacity.” “There have been a lot of weak books about the exploits, and failures, of SOE. It is a relief to read a different one. Nigel Perrin has been through all the papers that have turned up at Kew as well as getting hold of the surviving members of Harry’s family and reading the books that are worth pursuing on the subject, while keeping clear of the junk that still abounds.” Foot sums up, “ His life, provides a splendid example of what a single soul can do if he has stout friends to help him and a sound cause for which to fight.”

To have the support of the leading authority on the history of SOE for the book is an indication of the quality not just of the writing but also of the accuracy of the detail and overall the reality of being a trainee agent and their deployment. This was not a man from a privileged background but someone caught up as an English soldier in the evacuation from France. His feeling of helplessness and having been a coward walking away from people who needed his help drew him into the Special Forces.

The author has written well about the selection, training and deployment of agents and the secret world within which they operated. Harry Peuleve parachuted into German occupied France to recruit, train and lead the fledgling French Resistance. From the start his mission was wrecked as he fractured his leg after being dropped from the aircraft too low. His operation was curtailed eventually making his way back to England via Spain. At this point there was a tale of great courage and initiative but the story was incomplete as he was to return to France. Harry volunteered for a second mission and returned to France. He formed teams of French Maquis Resistance to harass the Germans, in this he demonstrated outstanding gallantry and leadership in an engagement with some 400 well armed Germans killing some 50 of them before making his escape.

In a period of betrayal and concentrated Gestapo activity this operation in the south of France was constantly fraught. Harry shot his way out of one Gestapo ambush killing two. He became involved in the detention of a German posing as an RAF officer to infiltrate the escape lines as well as working with the Secret Army. Harry was betrayed, captured and brutally tortured by the Gestapo at Avenue Foch in Paris. He was sent to Buchenwald from where he escaped as the war ended. His courage and leadership were rewarded with a DSO and MC Peulevé’s story continues into the difficult area of the peacetime re-adjustment of a man who suffered severe trauma. To the time of his death in 1963 he was still experiencing nightmares of his time in Buchenwald and it is likely that to subdue the mental agony he slipped into excessive drinking. Harry Peulevé was to die alone in a hotel bedroom whilst on business in Spain aged 47.

This is quite a story helped in the telling because Harry wrote about his experiences through a memoir, which was not completed nor published. With the help of Harry’s family now living in Denmark, a vast trawl of the National Archives and even some elderly ex SOE agents has produced an excellent book that has greatly added to the history of this incredible wartime organization. This has resulted in a well-written book that will hold the reader’s attention.

The story is remarkable, gripping, emotional, sad, inspiring; with a tale that a fiction writer might kill for. This is so much more than a wartime history. It is the story of triumph of the spirit with the depths and highs of a group of very brave individuals. Not a story to miss.

'The excellent list of reference, documentary sources and bibliography provide the key for the reader who wishes to carry out in depth research into areas of the SOE that particularly interest them. Highly recommended'

... the story of his hero's career is an engaging and useful work...