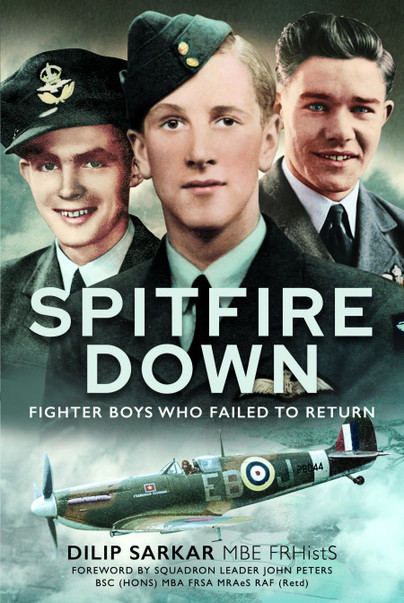 Fighter Boys Who Failed to Return

Preorder
Add to Wishlist
You'll be £20.00 closer to your next £10.00 credit when you purchase Spitfire Down. What's this?
+£4.50 UK Delivery or free UK delivery if order is over £35
(click here for international delivery rates)

Profoundly moved by the stories of wartime casualties as a child, Dilip Sarkar has since spent a lifetime reconstructing the lives of many of the fallen and is passionate about recording and sharing this very personal hidden history. In Spitfire Down he explores the stories of thirteen pilots who failed to return, all killed, either in action or flying accidents, whilst a fourteenth, Flying Officer Buck Casson, was brought down by a German ace over France and captured.

There is, for example, the virtually unknown story of ‘The Baby of the RAF’, Sergeant Geoffrey Painting. Posted to fly Spitfires with 118 Squadron at RAF Ibsley in Hampshire, Painting was hit by flak during an attack on enemy shipping off Cherbourg on 30 September 1941. Still listed as missing, at just 17, he is believed to have been the youngest RAF pilot killed during the Second World War. The author has reconstructed Painting’s short life with help from his family, and forensically deconstructed that last flight with the help of the now late Wing Commander Peter Howard-Williams DFC, who was flying with the teenage pilot that day.

The author also explores the heart-rending story of an American trainee fighter pilot, Pilot Officer ‘Jim Bob’ Lee, whose Spitfire collided with a Wellington bomber over Gloucestershire – resulting in the loss of all airmen involved. Two Canadian pilots perished on Pen-y-Fan, the highest peak in South Wales. The multi-national effort that defeated Hitler is further emphasised, in fact, through the stories of both Wing Commander Piotr Laguna and Flying Officer Franek Surma. But perhaps most tragic of all is how lightning struck Joan Welch twice: her first fiancée, Flight Lieutenant Lester Sanders DFC, was killed test-flying Spitfires in 1942, and her second, Pilot Officer Ian Smith, was killed flying in Palestine in 1945.

Using correspondence, diaries and other personal papers of the pilots concerned, the author has reconstructed their all-too brief lives and provided a lasting and profusely illustrated record of these sacrifices.