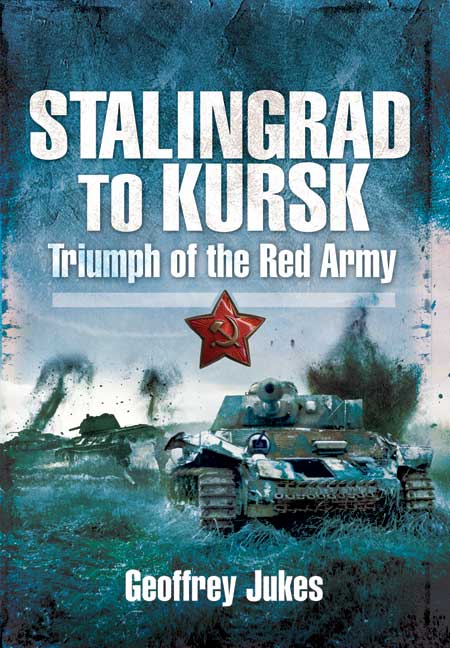 Triumph of the Red Army

Click here for help on how to download our eBooks
Add to Basket
Add to Wishlist
Get Stalingrad to Kursk (ePub) for FREE when you purchase 2 other eBooks.
Need a currency converter? Check XE.com for live rates

The epic battles fought at Stalingrad and Kursk were pivotal events in the war on the Eastern Front. After the catastrophic failure of the German offensives of 1942 and 1943, the Wehrmacht was forced onto the defensive. Never again would it regain the initiative against the seemingly inexhaustible forces of the Red Army. But how did this decisive shift in the balance of military power on the Eastern Front come about? This question has intrigued historians ever since.
In this original and thought-provoking new study Geoffrey Jukes reconstructs Soviet strategy and operations at Stalingrad and Kursk in vivid detail. He looks behind the scenes at the workings of the Soviet high command, at the roles played by the principal Red Army generals, and at the overriding influence of Stalin himself. There is an equally acute insight into German war aims and military planning as Hitler's armies geared themselves up to launch a sequence of massive offensives that would have a decisive impact on the outcome of the war.
This authoritative and highly readable reassessment of the turning point in the war on the Eastern Front is a major contribution to the debate about the reasons for the military defeat of Nazi Germany.

A new study and re-assessment of two of the Eastern fronts epic battles of WW2.
It covers amongst other things the workings of both the Soviet and German High Commands, how they effected the two battles which changed the course of WW2.

The author Dr Geoffrey Jukes was a leading authority on the Military history of Russia and the Soviet Union.
He worked for the British Ministry of Defence, taught at the university of Canberra and published many books.

This book was to be his last endeavor,he completed it shortly before his death in 2010

Dr Geoffrey Jukes was a leading authority on the military history of Russia and the Soviet Union. For many years he worked for the British Ministry of Defence, and he taught at the Australian National University in Canberra.

Among his many publications were The Russo-Japanese War 1904-1905, The Soviet Union in Asia, Stalingrad, Defence of Moscow, The First World War: The Eastern Front 1914-1918, Kursk, The Second World War: Eastern Front 1941-1945 and Hitler's Stalingrad Decisions. He completed this book in 2010, shortly before he died.