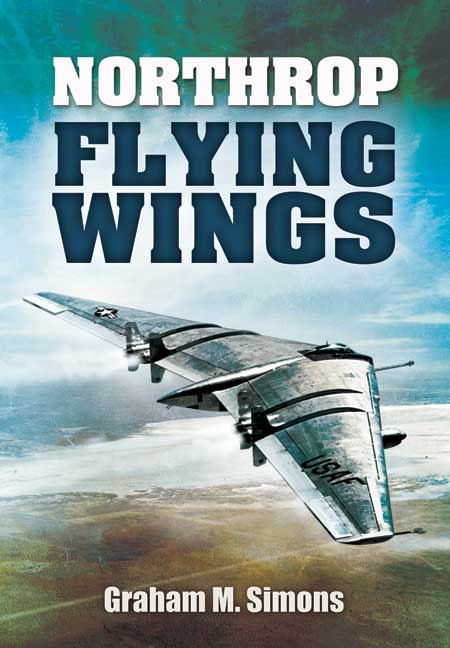 Click here for help on how to download our eBooks
Add to Basket
Add to Wishlist
You'll be £4.99 closer to your next £10.00 credit when you purchase Northrop Flying Wings. What's this?
Need a currency converter? Check XE.com for live rates

Jack Northrop’s flying wings were some of the most spectacular flying machines ever to grace the skies. In the years following the First World War, a new imperative arose; to produce a stealthy new type of craft that would provide the opportunity to discard any superfluous appendages, namely the weighty fuselage. It was hoped that this extensive refinement would eliminate the drag ordinarily produced by fuselages and tail units, thus creating a streamlined craft that could navigate the skies with ease, speed and a new level of precision.

This was to be an extreme measure and the ideas of Northrop and others like him were to push the limits of aircraft design to a whole new level. To eliminate both the fuselage and tail altogether, placing the pilot, the engines and the payload entirely within the wing envelope was a bold and drastic step. The resulting range of craft that were created, with barely any vertical surfaces at all, seemed almost like a fantasy come to life, something from the realms of science fiction. Indeed, one even appeared in the film version of H G Wells’ War of the Worlds.

Written off by many as something of an interesting dead-end that was investigated and found to be little more than a byway to mainstream conventional aeronautics, the fundamental design lessons learnt in the process of developing these craft were to
provide the basis for a raft of new designs, moving forwards into the second half of the twentieth century. During the 1970s, with an ever-growing need to find a new strategic bomber to replace the B-52 Superfortress, the flying wing design was brought to the fore once again. The B-2 Spirit was born out of this, continuing the legacy of this most stealthy design. This craft, along with the B-35, the incredible eight-engined YB-49 and the YRB-49A, are all highlighted; detailed analyses of each design, set within a wider historical context, make for a compelling record of this landmark design.

Graham Simons has done justice to a very complex but fascinating subject and the book is well illustrated with all manner of historical photographs.

This is an interesting account of the technical and political problems that beset the entry into service of B-35 and B-49. Few were built and the B-36 got the orders.