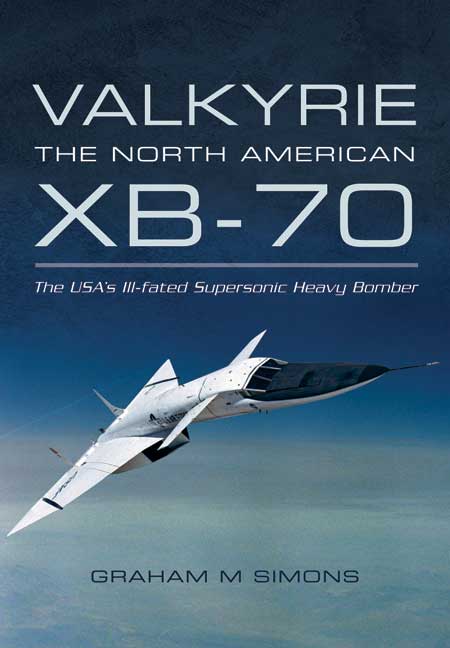 Click here for help on how to download our eBooks
Add to Basket
Add to Wishlist
You'll be £4.99 closer to your next £10.00 credit when you purchase Valkyrie: The North American XB-70. What's this?
Need a currency converter? Check XE.com for live rates

During the 1950s, at the time Elvis Presley was rocking the world with Hound Dog and the USA was aiming to become the world's only superpower, plans were being drawn at North American Aviation in Southern California for an incredible Mach-3 strategic bomber. The concept was born as a result of General Curtis LeMay's desire for a heavy bomber with the weapon load and range of the subsonic B-52 and a top speed in excess of the supersonic medium bomber, the B-58 Hustler. If LeMay's plans came to fruition there would be 250 Valkyries in the air; it would be the pinnacle of his quest for the ultimate strategic bomber operated by America's Strategic Air Command. The design was a leap into the future that pushed the envelope in terms of exotic materials, avionics and power plants.

However, in April 1961, Defense Secretary McNamara stopped the production go-ahead for the B-70 on grounds of rapid cost escalation and the USSR's new-found ability of destroying aircraft at extremely high altitude by either missiles or the new Mig-25 fighter. Nevertheless, in1963 plans for the production of three high-speed research aircraft were approved and construction proceeded. In September 1964 the first Valkyrie, now re-coded A/V-1 took to the air for the first time and in October went supersonic.

This book is the most detailed description of the design, engineering and research that went into this astounding aircraft. It is full of unpublished details, photographs and first-hand accounts from those closely associated with the project. Although never put into full production, this giant six-engined aircraft became famous for its breakthrough technology, and the spectacular images captured on a fatal air-to-air photo shoot when an observing Starfighter collided with Valkyrie A/V-2 which crashed into the Mojave Desert.

The loss of the $750 million aircraft and two lives stopped future development, although there were several attempts to redesign it as an airliner to compete against the European Concorde.

Of great interest for all those interested in aeronautical history of the Cold War period.

This book delves into the story behind the programme's inception, execution and demise in detail.

A fascinating insight into one of the Cold War's most interesting concept aircraft. Well researched and containing much new information, photographs and first hand accounts, this publication is highly recommended for all those with an interest in aircraft development.

A must read for anyone with even a minor interest in the technical and political aspects of the XB-70.

The cancellation of the programme and the very public fatal crash following a mid-air collision with an F-104 Starfighter chase aircraft ended a very interesting story, and here are all the facts.

This volume covers all aspects of the Valkrie's development. Well illustrated with numerous diagrams and black and white photographs. The book provides an interesting insight into one of the so-called 'white elephant' projects of the 1960s.