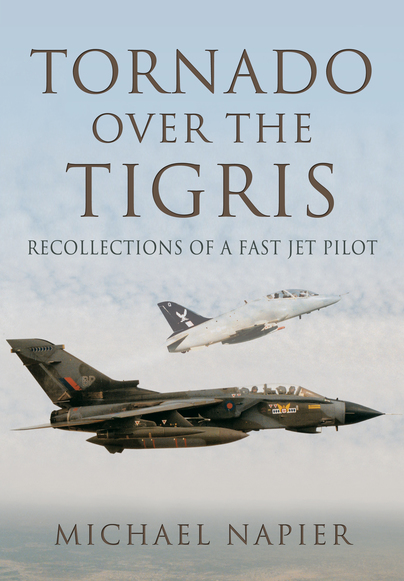 Tornado Over the Tigris (ePub)

Recollections of a Fast Jet Pilot

Click here for help on how to download our eBooks
Add to Basket
Add to Wishlist
You'll be £4.99 closer to your next £10.00 credit when you purchase Tornado Over the Tigris. What's this?
Need a currency converter? Check XE.com for live rates

Written from the unique perspective of a fast jet cockpit, Tornado Over the Tigris captures the essence of what it was really like to fly a Tornado at the front-line of the Cold War in Germany and on operations over Iraq in the aftermath of the Gulf War.

After achieving a boyhood ambition to qualify as an RAF pilot, Michael Napier was posted to RAF Bruggen in Germany where he spent five years flying Tornado GR1 strike/attack aircraft at the height of the Cold War. Always exhilarating, sometimes amusing and often dangerous, Michael Napier's Tornado flying ranged from 'routine' low-flying in continental Europe and the UK, to air combat manoeuvring in Sardinia and the ultra-realistic Red Flag exercises in the USA.

Progressing from struggling first-tourist to respected four-ship leader, he then became an instructor at the Tactical Weapons Unit at RAF Chivenor. This tour, during which he flew the Hawk, provided yet more exciting and challenging flying. He returned to the Tornado at Bruggen as a Flight Commander shortly after the Gulf War and subsequently flew a number of operational sorties over Iraq, which included leading air-strikes against Iraqi air defence installations as part of major Coalition operations.

This is his story, told with ease and great style. It is sure to inspire a fresh generation of fast jet pilots as they strive to make their own marks in this field.

Overall it was a great read to hear for real about the military pilot's experience; I often wonder how they fit into airline and commercial flying after midnight low flying missions where your only passenger is a navigator!
A great read.

Very well written and provides a vivid impression of the processes by which a young pilot matured into a respected operator. He writes freely and honestly and offers a compelling picture of a significant decade in the operational history of our Service. A very enjoyable read.

Mike pays tribute to his friends who died in the pursuit of operational excellence. His descriptions of high-speed manoeuvre, of the unfolding landscape below, of the demands of the computer-driven on-board systems: are all riveting. And he rightly affirms total respect for each navigator who shared the aircraft with him. You don't need to be a fast jet pilot to appreciate this book. As a retired f.j.p., I relished his evident enjoyment of what he was paid to sit and do. Enjoy!

A great collections of memoirs that takes the readers around the world as a passenger in the front seat of Tornado. More please Michael Napier!

Napier is a more natural writer than many of his ilk, and he recounts some great stories.

A stylish and easy read that is rich in detail, this book utilises the author's unique perspective and experiences with the Tornado to present a riveting story taking the reader through Napier's earliest training days, through the height of post-détente Cold War tension, and into Iraq.

For anyone with an interest in military aviation, this recently published book is a must. It can stand alone as a very well written account or complement perfectly a number of other recent works which cover the Cold War.

However, Tornado over the Tigris goes much further describing one man’s experience of the Cold War, in which he served on two Tornado squadrons in Germany, and what came afterwards when he returned to his first squadron as a flight commander deployed on operations in Iraq.

The author writes from the heart. This is no simple ‘Boys’ Own’ tale of ‘daring-do’ but a totally honest account of one man’s thoughts and feelings, his early lack of confidence, and concerns about a potential nuclear exchange as he strove to become combat-ready. Very much a thinking airman, Napier offers his personal thoughts about attacking Saddam Hussein’s vile regime in the years between the Gulf wars. Shining through his account is a story of professionalism and adaptability of a service that remains second to none. Inevitably there is much poignancy too.

I very much enjoyed the richness of the narrative: the joy and excitement of fast jet flying coupled with evocative descriptions of terrain and of weather that took me back to long-forgotten places, with my fingers moving almost automatically through the ‘switchery’ as I desperately searched for the IP while looking for the ‘bounce’. It was all too easy to become totally immersed.

Whether you have done some of what the author describes or not, this is an important personal account of a service that was in transition and is great fun to read.

Written from the unusual perspective of a fast jet cockpit, this is an account that accurately captures the essence of what it was like to fly a Tornado during the Cold War in West Germany.

“Vivid, rich in detail and of full of some terrific aerial action, Tornado Over the Tigris takes readers into the cockpits and crewrooms of a frontline RAF squadron during a fascinating period in the service's history.”

“Professional competence is still the military gold standard, and the modern RAF has it in spades. Michael Napier’s telling of the Tornado professionals’ story puts you in the cockpit and takes you on a grand adventure.”

“If you like being strapped into a fighter cockpit and churning and burning in afterburner (or reheat as the Brits call it), you'll love Squadron Leader Michael Napier's story! A great read, it takes you on a journey from youth, through training, and into the lethality of combat ops over the skies of Iraq. I found myself gripped by the details of squadron life, of insights into the complexities of functioning in a coalition of different air forces in a foreign land, and of the gut fear of first combat. Napier's recount of his life and times is a must read for anybody with a passion for fast flying and crushing g-forces.”