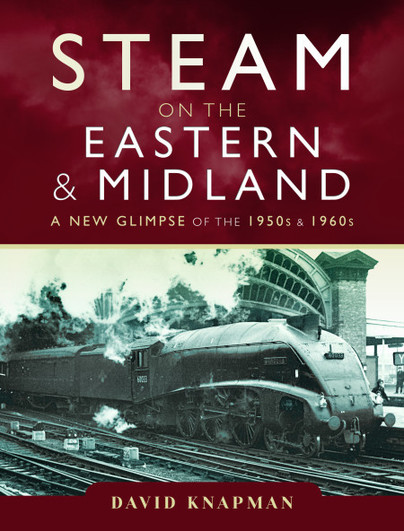 Steam on the Eastern and Midland (ePub)

Click here for help on how to download our eBooks
Add to Basket
Add to Wishlist
You'll be £9.98 closer to your next £10.00 credit when you purchase Steam on the Eastern and Midland. What's this?
Need a currency converter? Check XE.com for live rates

This is the second book from David Knapman’s personal record of railway views that were captured on black and white film in the late 1950’s and 1960’s, until the demise of steam on British Railways. The style of the book, in keeping with Steam on the Southern and Western, is the well tried and tested pictures and captions format and the majority of pictures are black and white photography. Not every picture portrays a train as there are interesting branch line and infrastructure scenes to view as well, whilst trains will be on main line and secondary routes.

The book carries its share of photographs of British Railways standard locomotives in the locations appropriate to the regions. Where preservation starts to overlap with the still active steam scene, some historic photographs are included. Photographs will be grouped by a particular location, for example, York on the Eastern and Hatch End on the Midland. Each of these topic areas will provide a flavour of the railway activity at the time. The book provides the reader with another gentle meander through the 1950’s and 1960’s railway scene and stir the memories that so many of us have seen and treasure.

As always with these historical photos, you can’t help but get involved in the picture and the story that it tells. Having read the caption about the location and locomotive, you begin to look at the other parts of the picture, perhaps a station, and the platform, the signals, the station signs, track layout etc.

Overall, the book is a very interesting read and as always with these picture books, you can jump in at any point and find something of interest.

Mostly taken on the author’s Agfa 35mm camera, but with a few on his earlier Box Brownie, this work is a collection of pictures from the 1950s and 1960s, and is a companion volume to ‘Steam on the Southern and Western’. One or two of the pictures used, perhaps from the latter camera, are somewhat murky, but the majority are sharp and clear and feature some interesting locations such as the Llanberis branch, Grassington, Quainton Road, Audley End and Darlington Works where a damaged-looking A1 60133 ‘Pommern’ is seen under repair.

I would recommend this book, as it covers a period of time of which new material will surely be getting thin on the ground, so grab it while you can.

A wonderful collection of photographs.

It's a very personal account, and makes entertaining reading.

Congratulations on the production of another fine collection of photographs; it had been a real joy browsing through these – recognising some now very familiar engine types, whilst being hopelessly at sea with others.[Being brought up in the West Country, I didn’t start to become familiar with the engines in this part of the world until quite late. Hence, I now recognise those types which have been preserved on heritage railways, but am still relatively unfamiliar with many of the classes which failed to get preserved – and which I know about only from old photos.]

I am well at ease with the Black 5s, the Jubilees, the Patriots, the A1s. A3s, A4s, Royal Scots, Coronation class, Stanier 8s, B1s and Q6s, etc., and am completely at home with the BR Standards, but when it comes to some of the earlier locos which are included in your sections on Cambridge and East Anglia, I realise just how much of a novice I am in this part of the country. Once again, thank you for producing such a lovely book; it has already been a pleasure, and I have a feeling that it will be an education.

Profusely illustrated throughout with black-and-white historic photography, "Steam on the Eastern and Midland: A New Glimpse of the 1950s and 1960s" is exceptionally informative and will prove to be a prized and appreciated addition to any and all personal, professional, community and academic library British Railway History collections and supplemental studies reading lists.