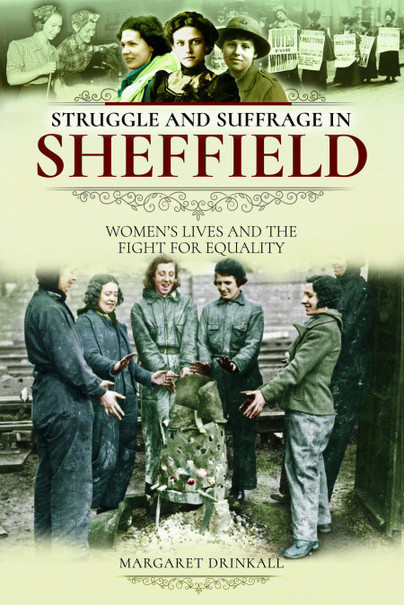 Struggle and Suffrage in Sheffield (Paperback)

Add to Basket
Add to Wishlist
You'll be £6.50 closer to your next £10.00 credit when you purchase Struggle and Suffrage in Sheffield. What's this?
+£4.50 UK Delivery or free UK delivery if order is over £35
(click here for international delivery rates)

This book looks into the role of women of Sheffield and how it has evolved from the powerlessness of a woman involved in a wife sale, to the achievement of the election of its first female Lord Mayor. Using, newspapers of the period, archive material and modern photographs, this book examines how the role of women slowly changed in the city. It also highlights the militancy of the Sheffield suffragettes who not only organised demonstrations in Sheffield, but also sent groups to take part in some of the most notorious demonstrations in London. Following these demonstrations several local women were badly manhandled by police before being arrested and sent to Holloway Prison. Adela Pankhurst tried at first to bring the women of the Sheffield WSPU to achieve the vote through peaceful means, only when the Conciliation Bill of June 1910 was dropped, did she then encourage them to take more militant action. Following the outbreak of both world wars the women of Sheffield worked in the steelworks making munitions. They worked day and night shifts often as bombs were falling about them, but when both wars ended they were abruptly dismissed, often with little notice as the men returned to take up their former jobs. Not until 2010 did the women of Sheffield get thanks or any kind of recognition for their services during both world wars. Only following a meeting with PM Gordon Brown and the erection of a bronze statue of Women of Steel in 2016, did Sheffield women truly get the acknowledgment they deserved.

⭐⭐⭐⭐⭐ Highly Recommended
Another great book from one of my favourite writers. As always, her research is meticulous. What I particularly like about this book is that, although I am sure it will be a first class reference book for history students, it is written in a style that makes it a very interesting and easy read for those reading it , as I did, purely for pleasure. I loved the photos; reading about the rise of the Women's movement, and, in particular, reading about the Sheffield women who had played such a key role in the steelworks during the two world wars, finally getting the recognition they deserved in 2010. Truly "Women of Steel" in all senses of the words. So brave. A wonderful book. Highly recommended.