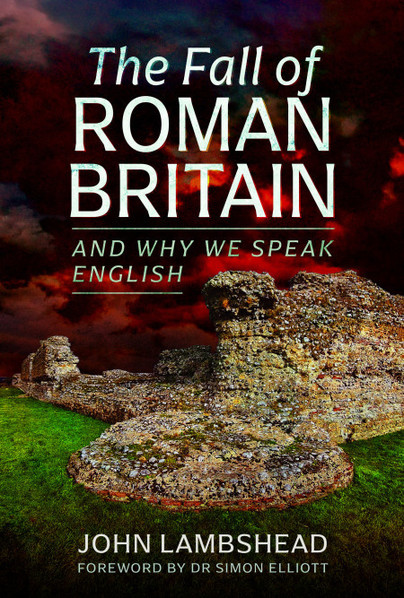 The Fall of Roman Britain (ePub)

and Why We Speak English

Click here for help on how to download our eBooks
Add to Basket
Add to Wishlist
You'll be £8.99 closer to your next £10.00 credit when you purchase The Fall of Roman Britain. What's this?
Need a currency converter? Check XE.com for live rates

The end of empire in the island of Great Britain was both more abrupt and more complete than in any of the other European Roman provinces. When the fog clears and Britain re-enters the historical record, it is, unlike other former European provinces of the Western Empire, dominated by a new culture that speaks a language that is neither Roman nor indigenous British Brythonic and with a pagan religion that owes nothing to Romanitas or native British practices.

Other ex-Roman provinces of the Western Empire in Europe showed two consistent features conspicuously absent from the lowlands of Britain: the dominant language was derived from the local Vulgar Latin and the dominant religion was a Christianity that looked towards Rome. This leads naturally to the question: ‘what was different about Britannia?’ A further anomaly in our understanding lies in the significant dating mismatch between historical and archaeological data of the Germanic migrations, and the latest genetic evidence. The answer to England’s unique early history may lie in resolving this paradox.

John Lambshead summarizes the latest data gathered by historians, archaeologists, climatologists and biologists and synthesizes it all into a fresh new explanation.

I would recommend this book to history scholars and amateur enthusiasts alike — not only those with an interest in Roman Britain, but also those with an interest in the physical/life/earth sciences who would enjoy learning more about the scientific analysis behind historical claims. Certain chapters would even be valuable resources for secondary school students conducting in-depth studies of different aspects contributing to the end of the Roman Empire in Britain.


This book is a series of essays that set out to answer 1) why Britannia was so comprehensively ruined, 2) why molecular data does not correlate with archaeological data in regards to Saxon migrations, 3) why Britain speaks English, not an offshoot of Latin.

I'd say that a basic understanding of Roman history is helpful when reading this book, if only because otherwise the sheer number of Emperor's listed could get overwhelming. That said, I do not have a lot of in depth knowledge about Rome, and I still found Lambshead writing to be perfectly comprehensible.

The Fall of Roman Britain covers a time period that I haven't often seen covered in books, with other scholars often focusing on how the Norman invasion of 1066 changed the social and political climate of Britain. This book, instead, discussions how the happenings of the continental empire affected the isolated local populations and Roman transplants, and why the two seem to have (mostly) kept to themselves.

I'd recommend this for anyone who is interested in British or Roman history.

Dr John Lambshead designed the award-winning computer game, Frederick Forsythe’s Fourth Protocol, which was the first icon-driven game, was editor of Games & Puzzles and Wargames News, and has written a number of wargaming rules and game supplements for Games Workshop, Warlord Games and Osprey. He was co-author, with Rick Priestley, of Tabletop Wargames, A Designer and Writer’s Handbook (2016) and author of the highly successful One-hour Skirmish Wargames (2018), both published by Pen & Sword Books. When not designing games, he writes popular science and historical articles and books and has written SF&F novels and short stories for Bane Books and other publishers. He lives in Rainham, Kent.