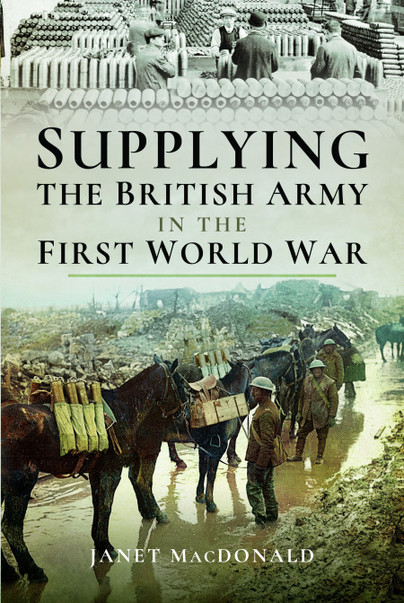 Supplying the British Army in the First World War (ePub)

Click here for help on how to download our eBooks
Add to Basket
Add to Wishlist
You'll be £4.99 closer to your next £10.00 credit when you purchase Supplying the British Army in the First World War. What's this?
Need a currency converter? Check XE.com for live rates

Napoleon famously said that an army marches on its stomach, but it also marches in its boots and its uniforms, carrying or driving its weapons and other equipment, and all this material has to be ordered from headquarters, produced and delivered. Janet Macdonald's detailed and scholarly new study explains how this enormously complex task of organization and labour was carried out by the British Army during the First World War.

She describes the personnel who performed these tasks, from the government and military command in London to those who handled the items in the field. They were responsible for clothing, accommodation, medicine, transport, hand weapons, armament and communications – a vast logistical network that had evolved to keep millions of men in the field.

This meticulously researched account of this important subject – one which has hitherto been neglected by military historians – will be essential reading and reference for anyone who is interested in the modern British army, in particular in its organization and performance in the First World War.

"MacDonald has provided a comprehensive and comprehensible text structured so that you can dip in and explore the range of evidence she has collated about the complex stories of supplies."

Contrary to popular belief, logistics is a truly fascinating subject that have immense practical applications in both civilian and military domains. I am pleased to state that Janet MacDonald has produced a book of genuine value that should serve as a springboard for other historians to investigate into wartime logistical practices of other nations.

This is a remarkable and extremely important book. I have read many books about WW1 over the years but this is the first time I have come across so much detail about the supplies and logistics involved that were vital to the success of the British and Allied armies involved in the conflict... I would suggest that anyone studying WW1, as well as anyone with an interest in the conflict, really needs to read this book as, otherwise, it is impossible to understand the problems encountered by those in the front line. If Janet MacDonald has not received an award for this book, to my mind, that should be put right at once.

A book that can not miss on the shelves of bookstores of enthusiasts of the Great War, which examines a topic little known or not valued enough for its importance.

It is a pleasure to read a well-research and comprehensive account of logistics in WWI in support of the British Army.

Much has been written about the experience of soldiers during the First World War, the command and control of the battles fought, alongside a huge amount covering the battles that took place in the various theatres of war. Largely the movement of materials required to fight a war, has not been covered less extensively. That is the sole focus of this book - to tell the story of how the British Army was supplied during the First World War with a build up of how the supply system was developed prior to the war, and how it operated throughout the war, thus reinforcing a cohesive command and control of that army.

Consequently, this book is a vital point of reference to understand the various facets of the British supply lines during the Great War. Its coverage is first comprehensive in depth and breadth.  It is an scholarly account of how this complex task was undertaken by the British army during the First World War.  In turn it tells you all you need to know about the supply process. The book concentrates on key elements of supply, including personal equipment, accommodation, transport, medicine, hand weapons armament and communications. The detail on this supply movement is comprehensive, covering such areas as money contracts and control, supply depots, horses, animal transport, machinists transport, munitions ,inland water transport, food and drink, on the Western Front. There is a further section which focuses on beyond the Western Front including Gallipoli, Salonika, Egypt, Palestine, Mesopotamia, East Africa, Italy and North Russia. No stone is left un turned.... Overall, this is an excellent book which will be a central point of reference to anyone who has an interest in the British Army.

Most people are well aware that every effort was made to keep the troops and the other armed forces supplied during the long and bloody WWII – Janet MacDonald’s account of the supply chain and the problems involved is a brilliant piece of historical fact that makes for a compelling read.

I approached this book as a logistician by profession. Ignoring the introduction which repeats one of the untrue shibboleths about the government believing the war would be over by Christmas (if so what was Kitchener doing raising all those Service Battalions), it recovers spectacularly to deliver a very detailed account of the business of equipping the army for a long war on many battle fronts. Dealing with all aspects from procurement, through contracting, the realities of staged payments, technical standards and supplier selection it actually describes what we know today to be ‘supply chain management’. In doing so it describes how raw materials were identified and sourced, with delivery direct to battlefronts whenever possible to avoid double handling inefficiencies. Some of the information and statistics regarding the sheer size of volumes of materiel required to furnish the troops with the necessities of war is frankly astonishing. A very necessary book for anybody wanting to fully understand the value of logistics in getting an army to the point where victory in battle could be possible.
Michael McCarthy. Battlefield Guide.