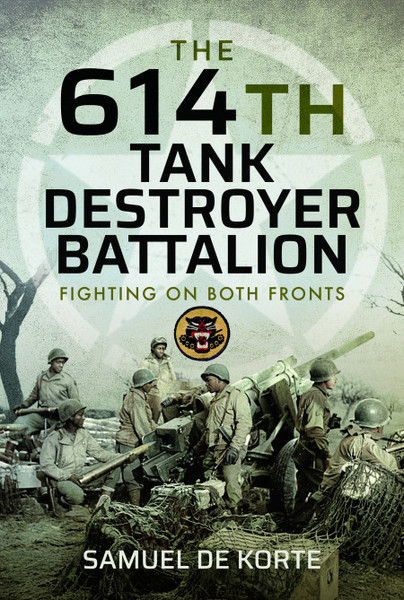 Add to Basket
Add to Wishlist
You'll be £14.00 closer to your next £10.00 credit when you purchase The 614th Tank Destroyer Battalion. What's this?
+£4.50 UK Delivery or free UK delivery if order is over £35
(click here for international delivery rates)

This book follows the soldiers of the 614th during their time in France, in World War Two, with the difference being that they were an all black unit. Now at the time they faced enormous prejudice and racism from not only fellow white soldiers but the army top brass too. But to be honest this just spurred them on to be better than anyone else, if these guys were going to be victimised they were going to prove everyone wrong by being the best at what they did.

Now, this Tank Destroyer Battalion had its fair share of downs but it had many ups too, so much so that they earned the respect of fellow white soldiers and received a Distinguished Unit citation too. As usual, this case is like all others where black people are not given the respect and recognition they deserve and so they have to work harder in order to receive it from fellow white people. This book takes the reader through their war via a good number of personal accounts, reports, evidence and resources. Did I know about these soldiers and what they achieved, no sadly not. But having read this brilliant book I would like to read more and learn more. This has been a fantastic book, well written and very well researched and it feels like this book has been written by a committee wanting to get this out in the world. A thoroughly excellent read, there is little to fault in this book. I should add that at the back of the book all those black soldiers are listed and remembered and there is also a chapter that lists all the medals and citations received by these young men and what they achieved.

Highlight: An excellent read, and full of previously unseen images and personal stories.

This is a fascinating and well researched book about African Americans serving in WW. Most people only know about the Red Ball Express or the Tuskegeee Airman, here is a much needed review of so many young men who helped to liberate Europe.

An excellent read, and full of previously unseen images and personal stories.

Highlight: 'It’s basically just cool. It does what Band of Brothers did for the Airborne, this does for the Tank Destroyers. Honestly, if the Tank Destroyers get a movie or a television show and it’s not based on this book, then there is something seriously wrong in the world.'

“The 614th Tank Destroyer Battalion” is a scholarly work where quite some research has gone into. The book provides some interesting perspectives on the doctrinal development and use of Tank Destroyers during WWII. It also gives a short historical overview of the use of segregated units within the US Army during WWII in general. This is followed by a chronological account of the key events experienced by one of the segregated units from its activation throughout the European theatre of war up until the end of WWII. Having read quite some books on WWII, this book provides some new interesting insights and is a recommended read.

The African-American World War II experience in one compelling book

Books about the Second World War often focus on the vanguard forces like armour and paratroopers and rarely on the less glamourous branches of the army. The American tank destroyer arm was one of such branches. Raised as a countermeasure for the imagined German tank fleets, it became an orphan of the army when the German armoured threat did not materialize. Within the tank destroyer arm, the ‘colored’ or ‘negro’ troops were orphans within a superfluous force. It is in this light remarkable that Samuel de Korte managed to write a compelling history of one of these ‘black’ destroyer battalions.

Military historian Samuel de Korte [follow him: De Korte Geschiedenis] wrote his thesis about the representation of African-American soldiers during the Second World War. He uses his extensive knowledge about the war experience of African-Americans to write a unit-history of the 614th Tank Destroyer Battalion. These soldiers did not only had to fight the Germans on the battlefield but also fight against the prejudices of their fellow White citizens. African-Americans were widely seen as inferior in the 1940s and these perceptions were also widespread within the military. African-Americans were discouraged from combat training and often relegated to rear-guard duties like the ordnance branch.

The fact that the tank destroyer force soon after its inception proved to be superfluous made the position of the African-American battalions rather precarious. These battalions seemed first in line for disbandment, which was bad for morale. The fact that African-American battalions were also less likely to be sent overseas was also not very encouraging – why would you perform in training if the chance of deployment in battle was very low? De Korte describes vividly the experience of African-Americans in training, the discrimination in the army and the disappointments of the many postponements in shipment oversea.

The 614th Tank Destroyer Battalion finally arrived in Lorraine in November 1944 as a unit with towed cannons rather than self-propelled guns. As a result, they were used as direct artillery support for the infantry in the frontline rather than their intended anti-tank role. The description of their experience in Alsace-Lorraine between November 1944 and March 1945 gives an unique insight in the war on that front, including the German counterattacks in January 1945. The 614th Tank Destroyer Battalion matured quickly and proved itself to be a valuable asset. They became a valued support for the 103th Infantry Division and got praise from the chain of command up to the general of the 7th Army himself.

Samuel de Korte did a great job in collecting such a rich array of sources, from archival material to soldier’s letters and newspaper clippings. By the end of the book, you have a clear understanding of the wartime experience of both the tank destroyer branch as the role of the African-Americans soldiers within that branch. In the final chapters, he even makes a comparison with similar tank destroyer battalions and he tells about the post-war experience of the many veterans. The African-American soldiers generally came back with more self-confidence and often played an important role in the organisation of the African-American community on a local level.

The book is an easy read for a wide audience but it contains a lot of gems for the more experienced reader regarding the Second World War. It is a standard work in the understanding of the war experience of the African-American soldier in both their personal experience as their unit combat performance. Reading this more than 200 page book has certainly taught me a lot! Besides the valuable reading experience, the book contains a nice section of photographs and is printed in hardcover with a beautiful full-colour dustjacket. Warmly recommended!