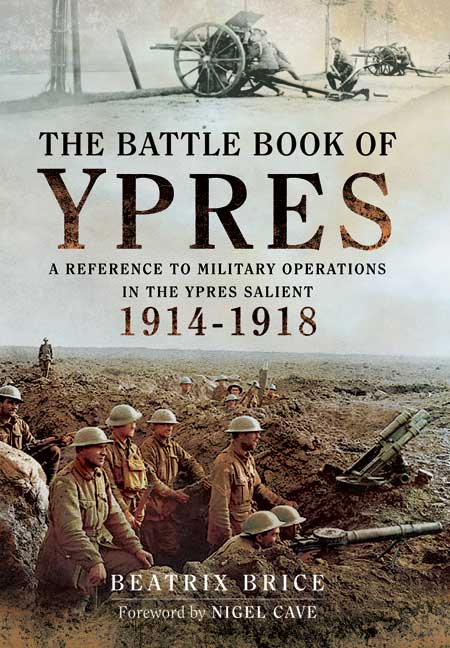 The Battle Book of Ypres (ePub)

A Reference to Military Operations in the Ypres Salient 1914-18

Click here for help on how to download our eBooks
Add to Basket
Add to Wishlist
You'll be £4.99 closer to your next £10.00 credit when you purchase The Battle Book of Ypres. What's this?
Need a currency converter? Check XE.com for live rates

Of the many hard-fought battles on the Western Front, Ypres stands out as an example of almost inhuman endeavour. For four long years it was the focal point of desperate fighting. Officially there were four main battles in 1914, 1915, 1917 and 1918; these were more accurately peaks in a continuing struggle, for Ypres symbolised Belgian defiance, and the British continued to expend disproportionate resources on defending it. It never fell, although the Germans came close to its gates, and indeed its loss would have been a severe blow to morale.

The Battle Book of Ypres, originally published in 1927 and now presented again as a special Centenary Edition, comprises a chronological account of the fighting in the Ypres Salient during the First World War, followed by a useful and unique alphabetical reference to the events in and around each hamlet, village or wood – names familiar to those who fought or followed the course of war all those years ago, names now once again lost in insignificance. The names given to each stage of the struggle by the Battle Nomenclature Committee are listed in the appendix. Also included is an index of formations and units, an annotated bibliography and a new Foreword by military historian Nigel Cave.

This book was originally published in 1927, and has since been published as a special Centenary edition. In turn, represents a significant historical piece of work in the immediate wake of the First World War. In turn it gives the reader a chronological account of the fighting on the Ypres Salient during.  Unlike some of the other battlegrounds on the Western front, the Ypres Salient is perhaps more challenging to obtain a handle on given the different battles that happened in this area over the four years, with the shifting ground. The book takes each aspect methodically, and helps the reader to understand key elements.

The book was researched in the reading room of the Imperial War Museum. In his Foreward, Nigel Cave notes that, within the era that it was written and the attitudes which it reflected, it still serves very well in providing detail of the battle. It continues to serve its purpose today. Cave adds that it provides the reader with ‘numerous interesting accounts of what happened in great number of locations in the Salient and to its immediate south, including the area around Messines’. He adds that the book ‘continues to serve the purpose as a type of gazetteer for the Salient. In that regard, it is different from many of the other books written on this battle.

Originally published in 1927 and now presented again as a special Centenary Edition this 273 page hard back work comprises a chronological account of the fighting in the Ypres Salient during the Great War, followed by a useful alphabetical reference to the events in and around each hamlet, village or wood. The names given to each stage of the conflict by the Battle Nomenclature Committee are listed in the appendix. Also included is an index of formations and units, an annotated bibliography and a new Foreword by military historian Nigel Cave. The whole forms an excellent work of reference which will surely become invaluable to students of the Great War, no wonder Pen & Sword have seen fit to republish and well done to them. Recommended.

This is one of those essential books of life and death in WWI on the Western Front.

This is a story of bravery of the British soldier, and their allies, and a place now cemented in British Military history along with the country of Belgium, where Ypres remains a monument in itself to this day.

This is more than a history of the Salient and more than a Gazetteer. It is a post-Great War social statement, a tour into the psyche of someone profoundly affected by the conflict ... I like this book, but not for its history of 1914 - 1919. I like it for its view of the Great War from the 1920s.

Beatrix's words and those of her regimental correspondents still have the power to shock and humble.