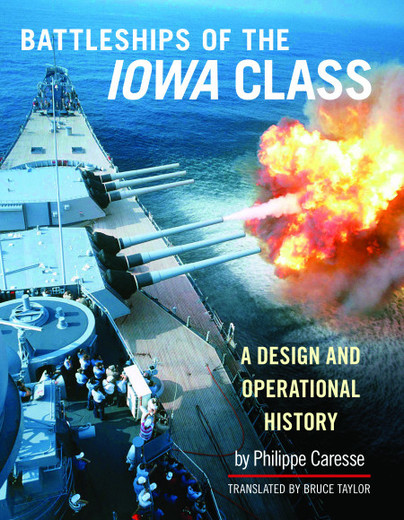 The Battleships of the Iowa Class (Hardback)

Add to Basket
Add to Wishlist
You'll be £75.00 closer to your next £10.00 credit when you purchase The Battleships of the Iowa Class. What's this?
+£4.50 UK Delivery or free UK delivery if order is over £35
(click here for international delivery rates)

The four battleships of the Iowa class, the crowning achievement of US battleship construction, had exceptionally long careers and each in their way left a distinctive mark not only on the US Navy but on naval history at large. Built as the ultimate American battleship and designed to engage the major units of the Japanese and German fleets, the class were commissioned in the closing stages of World War II, the beginning of half a century of service during which individual units saw action in the Korean War, the Vietnam War, the Lebanese Civil War and finally the Gulf War.

As such these vessels are symbolic of the primacy of US seapower during the Cold War, and the preservation of all four of these mighty vessels as museum ships is testament not only to their enduring fascination, but also to the immense technical, financial, military and political resources wielded by the United States during the second half of the twentieth century.

This superb new book includes a general introduction providing the context and design history of the entire class; detailed and extensively illustrated information on specifications, equipment and modifications; and comprehensive coverage of the construction, career, operations and preservation of each unit. The author covers all the significant events in the life of each ship, including Missouri in Tokyo Bay, New Jersey off Vietnam and Lebanon, Wisconsin's collision with the destroyer Eaton, the Iowa turret explosion and many others.

Lavishly illustrated with more than 600 photos (many in colour), 35 spectacular CG artworks and six maps, this beautifully produced work is the ultimate volume on the ultimate battleship class and a fitting souvenir of these four ships, now all preserved for posterity.

What is there not to love in a book on these marvellous ships and their service careers? Highly recommended.

I had a huge desire to review this book and I have to say that it has not let me down at all, the work is really impressive.

This must be the definitive review of the Iowa Class battleships that were the last of their breed in active service, now preserved uniquely for visitors. A serious book at a serious price, beautifully produced and presented. It is a must for every military professional historian and military history enthusiast. – Most Highly Recommended.

This is an extraordinary title and others that are similar will be known to many of you who have an interest in things naval. This book comes hugely recommended in every respect.

The Battleships of the Iowa Class is a wonderful homage to ships the likes of which we will never see again. The history sections apart, this is not a reading book, but one you dip into and explore, or use as a reference tool for modelling or historical research. The photographs and 3D renderings help you appreciate the complexity and, well, awesomeness of these incredible feats of engineering. For me, and probably everyone who served in the Iowa class battleships, Caresse brought back some cherished memories, but anyone interested in the big ships will love this book. 10/10

If the Iowa class battleships are of specific interest to you then this offering should I feel cover every aspect of the vessels to your satisfaction. The text is well written and informative resulting in it being easily understood despite going into great detail. The pictures are very nicely captioned and show what the captions refer to. The images of those 16inch guns firing are very impressive inclusions and you can see the whole ship being forced sideways, try pushing a flat board through the water and you will then understand the forces involved.

This is a very impressive history of these iconic warships, satisfactorily filling all three types of naval book – the technical, the service history and the pictorial guide.

The book can not miss on the shelves of fans of naval history and modeling, because it represents a fantastic approach to know the history of the most powerful battleships ever created.
The most fascinating aspect is the photographic one supported by a passionate technical and historical description of these real "floating cities".

An impressive book not just for size and weight, but with a level of detail of the service careers of these historic ships which would be hard to imagine can be improved. Having been a visitor to the Missouri, and seen the contrast of those huge 16in main guns, the commemorative plaque showing where the Japanese signed the surrender at the end of WW2, to the armoured boxes of the crusie missiles which fired the opening shots of the Gulf War in 1991. So good that the ships are preserved today.

This is a stunning table top book that offers all a reader could want in understanding the design, construction and capabilities of the Iowa class of US battleships. It is a contagious read that demands that you keep picking it up and read on. Images, drawings and historical context all excellent. Recommended.