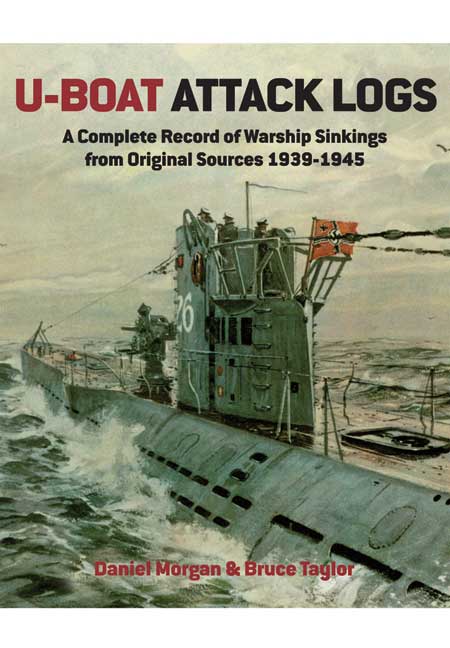 A Complete Record of Warship Sinkings from Original Sources 1939-1945

Click here for help on how to download our eBooks
Add to Basket
Add to Wishlist
You'll be £18.00 closer to your next £10.00 credit when you purchase U-Boat Attack Logs. What's this?
Need a currency converter? Check XE.com for live rates

During the Second World War over 250 Allied warships from a dozen navies were sent to the bottom by German U-boats. This ground-breaking study provides a detailed analysis of every sinking for which source material survives from both the Allied and the German sides, resulting in detailed treatment of the fate of 110 vessels, with the remainder summarised in an extensive appendix. Uniquely, each entry is built around a specialist translation of the relevant segment of the war diary (log) of the U-boat in question, taken directly from the surviving originals – remarkably, this represents the first large-scale publication of the U-boat war diaries in any language.

The book offers a wealth of new information, not only with respect to the circumstances of the sinkings from both the Allied and German perspectives, but also to the technical environment in which they lived as well as the fate of the crews. The entries include background details on the vessels concerned and the men involved, with a selection of rare and carefully chosen photos from archives and collections around the world. Each entry is itself a compelling narrative, but is backed with a list of sources consulted, including documents, published works and websites.

A decade in the making, this is probably the most important book on the U-boat war to be published for many a year

This is a very interesting book because of its coverage of U-Boat attacks on Allied warships via the entry into the log of the U-Boats concerned. It is expanded by giving the survivors side of the story if there were any, as well as other relevant information. I found it extremely useful in back-checking data I already had for various ships as well as being able to add to it. The book is easy to follow with a list of ships sunk, which the reader can then refer too.

A comprehensive account of the sinking of every warship by a U-boat. This book is the product of ten years research in the archives of all the navies involved and offers significant new information on many of the most famous incidents. Each entry is backed with a list of sources consulted, and illustrated with a selection of rare and carefully chosen photographs from collections around the world.

This excellent book is divided into 109 chapters, each of which describes the sinking of an allied warship by a U-boar. Each chapter gives technical and detailed career details of the warship lost, the circumstances of the action, U-boat log entries with comments, the sinking itself; the fate of the crew and the fate of the U-boat concerned and that of her commander. These elements are enhanced by photographs of the lost ship, many of the U-boats and the majority of the commanders.

This large-format 450-page hardback book is essential reading for those interested in the U-Boats of Word War II. It provides details of the sinking of 110 warships where the U-Boat's attack log has survived.

This is an indispensable reference work for anyone studying either the U-Boat Campaign or WW2 at sea. It is clear, insightful, never judgemental, copiously illustrated, fascinating- and harrowing, for the fate of the en in the ships, the submarines attacked was invariably grim.

Daniel Morgan is a professional translator from a naval family