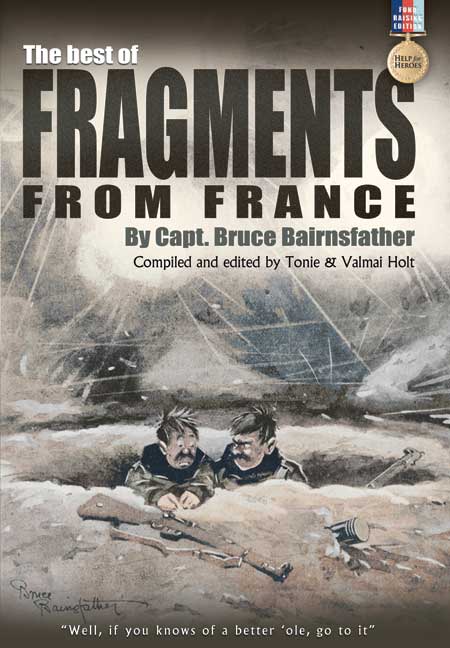 The Best of Fragments from France (ePub)

Click here for help on how to download our eBooks
Add to Basket
Add to Wishlist
You'll be £4.99 closer to your next £10.00 credit when you purchase The Best of Fragments from France. What's this?
Need a currency converter? Check XE.com for live rates

Bruce Bairnsfather (BB) was the most famous cartoonist of the First World War and his soldier characters Old Bill, Bert and Alf, faced with sardonic good humour everything that the Germans, the mud and their officers could throw at them. However, Bruce (known by some as ‘The Man Who Won the War’) never received the acclaim that he deserved for the morale boost that his cartoons gave to the troops at the front and to the people back at home. The 50th Anniversary of Bairnsfather’s death on 29 September 2009 offered an opportunity to redress the balance, and acknowledging it in combination with raising funds for Help for Heroes (H4H) seemed to be most appropriate.

The cartoons reproduced in this collection were originally drawn for The Bystander, a popular weekly magazine, in which they appeared each Tuesday throughout most of the Great War. Their effect on the public was totally unexpected, and so dramatic that Bystander sales soared. The organisation, with unerring good judgement, decided it had a winner in Bairnsfather, and published the first 43 of his cartoons in an anthology. It was produced in February 1916, given the name Fragments from France and sold for 1s. On the front cover was a coloured print of The Better ‘Ole which soon became, and was to remain, the most loved of all Bairnsfather’s cartoons. The authors own the original. Sales quickly reached a quarter of a million and a second anthology was published, More Fragments from France. It was described on the title page as ‘Vol II’ and the price was still 1s. The cartoon on the
cover was What time do they feed the sea lions? In this volume The Bystander launched the first of a series of imaginative marketing exercises, similar to modern promotional methods.

The full extent of the proliferation of the cartoons on all manner of products, from playing cards to pottery, is described in our Bairnsfather biography. Soon Still More Fragments from France were clamoured for, and, with an
eye to the future, more the booklet was labelled No. 3 on the cover, Vol III on the title page.

The success of the Fragments magazines was such that edition followed edition in rapid succession and at least eleven editions were published. The covers retained the same cartoon but were reproduced in different colours, both of board and ink — green, blue, red, grey, fawn and mauve. In America Putnam’s issued Nos. I-IV as one volume and parts V and VI separately. Various hard and leather-bound collections were offered for sale by The Bystander, and the drawings were sold separately as prints and “Portfolios” for framing. They were also printed in colour as give-aways for Answers magazine.

Leafing through these pages, the reader will soon understand their tremendous popularity and success which have withstood the test of time.

Shut your eyes for a moment and try to choose a few things - music, words, images - that capture the essence of the First World War as it was experienced by the majority of British soldiers. How about Benjamin Britten's settings of Wilfred Owen's poetry in his War Requiem? Was that one of them? Or Rupert Brooke's If I should die...? Or Paul Nash's striking, angular descriptions of the trench landscape? Did any of these figure in your top ten?
I doubt it. More likely contenders are Roses of Picardy, If you know's of a better 'ole, go to it..., and a portrait of Old Bill squatting doggedly in a trench staring disapprovingly but stoically at a tin of plum and apple jam. Two of these - words and image - are the work of Bruce Bairnsfather, whose contemporary cartoons provide us even now with the authentic voice of the trenches and the pictures that evoke the experience of our grandfathers and great-grandfathers. The most potent conjurors of that experience, shared by millions of ordinary men, are not high art,, but folk memories rooted in the Great War's popular culture. Sassoon understood this:
"For when my brain is on their track,
In slangy speech i call them back,
With fox-trot tunes their ghosts I charm,
'Another little drink won't do us any harm.'
I think of a ragtime; a bit of a ragtime;
And see their faces crowding round."
Bruce Bairnsfather was the son of an Indian Army officer. He was born in Murree (Pakistan) in 1888. He briefly joined the British army before the First World War but left to go to art school. When art didn't pay, he worked as an electrical engineer until he joined the Royal Warwickshire Regiment in 1914 and crossed to France.
In 1915 Bairnsfather returned to England, wounded, gassed and suffering from shellshock. In the intervening months he had witnesses the advent of trench warfare and, at Plugstreet Wood near Messines, had invented the character of Old Bill. His cartoons began to appear in a magazine called The Bystander. The first collection of his cartoons was published in February 1916 and rapidly sold 250,000 copies. A second collection followed, then another and another until there were eight. Bairnsfather's intensely human, grim humour had captured a prevailing mood.
At first his cartoons, which often showed unacceptably untidy soldiers having a too realistically unpleasant time, were frowned on. Later, when it was clear they were widely popular and unstoppable, they were encouraged. His relationship with the establishment, however, was never warm. In 1918 Captain Bairnsfather was reprimanded by a Provost-Marshal in the Adelphi Hotel Liverpool for acting in a manner prejudicial to our winning the war - namely, wearing black socks with brown shoes. While The Times Literary Supplement deplored the way he standarises - almost idealises - a depraved type of face and protested against so cruel a caricature of the men who endured the first winter in France, the men in question wrote congratulating him on capturing the reality of their war. Fighting soldiers themselves were clearly prepared to forgive both his portraits of their depraved countenances and the severe damage his scandalous choice of anklewear had caused the war effort. One wrote: Take it from me he is one of the people who by supplying roars of laughter and joy to the troops are helping to win the war.
His style and humour were widely copied at the time and have been ever since. In BAR 147, for example, I reviewed Sidney Rogerson's 1933 memoir Twelve Days on the Somme, which contains two of the author's sketches which were heavily influenced by Bairnsfather. His cartoons anticipated those of RAFF (Bill Hooper) which, a generation later, epitomised the similarly scruffy cheeriness of the RAF's operational aircrew and squadron groundcrew. In RAFF's Nice Types and its sequels, the faces of AC2 Plonk and his comrades were strognly reminiscent of their fathers, whom Bairnsfather's cartoons celebrated.
Feeling, like many others, that Bairnsfather's achievement had not been properly recognised, Tonie and Valmie Holt produced this volume in 1978 (now republished for the third time) and sponsored a memorial plaque at St Yvon in Belgium, where he drew his first cartoons. The profits from this new edition are generously and appropriately being donated to Help for Heroes. But I'm sure Major and Mrs Holt would be the first to agree that Bruce Bairnsfather's greatest memorials are the cartoons themselves and the lasting place they won him in the popular memory of the Great War.