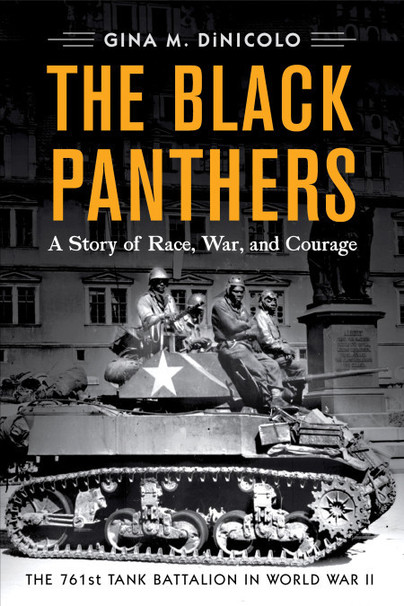 Add to Basket
Add to Wishlist
You'll be £19.99 closer to your next £10.00 credit when you purchase The Black Panthers. What's this?
+£4.50 UK Delivery or free UK delivery if order is over £35
(click here for international delivery rates)

Deployed to the European front in November 1944, the 761st Tank Battalion was almost immediately ambushed by a veteran German force. Despite suffering heavy casualties, the unit cut its way out of the trap. Quickly battle hardened, the tankers continued to see intense combat and fought

side-by-side with Patton's Third Army when Germany launched its last-ditch offensive through the Ardennes in December. The 761st helped check the German advance, cut resupply routes to the enemy forces surrounding beleaguered Bastogne, and drove the enemy back, recapturing towns crucial to the final defeat of Nazi Germany.

In The Black Panthers: The 761st Tank Battalion in World War II historian Gina M. DiNicolo tells the full history of this important American fighting unit, from its inception to its deactivation soon after the war. Relying on extensive archival research, including documents that had not been consulted in previous accounts, and personal interviews with surviving soldiers and family members, the author describes the unit’s training, deployment, and combat, as well as individuals, such as future baseball star Jackie Robinson, who served briefly with the unit stateside, their commander, Maj. Paul Bates, a white officer who fought against institutionalized racism while struggling with his own demons, and Sgt. Ruben Rivers, who gave his life to protect his fellow soldiers, one of only seven African American men awarded the Medal of Honor for World War II heroism.

GINA M. DINICOLO is a military historian and award-winning journalist who has written on military topics for nearly two decades. She was a contributing editor at Military Officer magazine, where more than twenty of her stories graced the publication’s cover. She is a graduate of the U.S. Naval Academy with a degree in history and served as an officer in the Marine Corps.