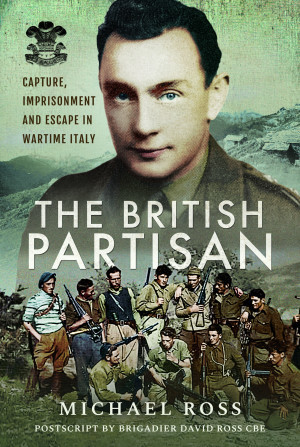 Add to Basket
Add to Wishlist
You'll be £11.99 closer to your next £10.00 credit when you purchase The British Partisan. What's this?
+£4.50 UK Delivery or free UK delivery if order is over £35
(click here for international delivery rates)

A gripping account of the many months spent behind enemy lines living with Italian people who daily risked their lives for him – one of whom eventually became his wife. A more exciting story than mine! - Eric Newby CBE MC – Author of Love and War in the Apennines

I have always been a sucker for escape stories, so no need to tell you tell you that I greatly enjoyed it. - Sir Ludovic Kennedy

This real gem, excellently written, fresh, vivid, attention holding, has added something substantial to the history of the period. - British Army Review

In this action-packed account, the author, a Welch Regiment officer, describes his remarkable Second World War experiences. These include his baptism by fire in the Western Desert against Rommel’s armour in 1942, the spontaneous help of nomad Arabs when on the run for ten days behind enemy lines, his capture and life as a POW in Italy.

Ross and a fellow officer made the first escape from Fontanellato POW camp only to be recaptured on the Swiss border. During his second escape, Ross fought against the occupying German forces in north Italy alongside the Italian partisans, who nearly executed him initially. He avoided recapture for over a year before finally reaching Allied lines.

The reader learns of the extraordinary courage and sacrifice of local Italians helping and hiding Allied soldiers. Ross’s story has a poignant conclusion as, while on the run, he fell in love with a prominent anti-fascist’s daughter whom he married after the war.

Originally published as From Liguria With Love, this superbly written and updated memoir is a powerful and inspiring tribute to all those who risked their lives to help him and his comrades.


Fantastic biopic of a genuine larger-than-life character from WW2, Michael Ross who fought against Rommel , was captured and taken to a Prisoner of War camp in Italy, from which he escaped t fight the Germans in northern Italy before finally ending up at the Allies' lines. Brilliantly written and thoroughly fascinating.

This is a memoir that has the excitement of the best novels. The author tells his story with panache and feeling – Most Highly Recommended

I found this book to be very insightful; a unique story with a poignant conclusion as after the war Michael went back to Italy and married the daughter of the family that had hidden him for many months. The photographs included in this publication make it all the more interesting because they were taken from the Ross family archive, and this somehow makes them all the more interesting.
A truly remarkable publication covering capture, imprisonment, escape and finding love in wartime Italy.

A really exciting true story of a young officer of the Welch Regiment in WWII. A fast-moving account of capture, escape, betrayal and love. Helped by Senussi tribesmen in North Africa and farmers in Italy who risked their own lives to help Michael Ross. Highly recommended and would make a great film.

This is a beautifully written account of one man's desert war, his capture and imprisonment in Italy, and eventual escape with the help of many brave north Italian locals. Not only is it a fast moving pare turner, it also gives thoughtful insights into life as a POW. And it has a happy and romantic ending!
Peter Lipscomb

Michael Ross, an undergraduate at the outbreak of the War, immediately volunteered for military service and was commissioned into the Welch Regiment. This classic memoir, originally published in 1997 as From Liguria With Love and now updated by his son David, describes his experiences in North Africa, where he was captured, and Italy, both as POW and as an escapee, fighting alongside the partisans. Ross was Mentioned in Despatches for gallantry.

After the war, he returned to Italy and married Giovanna, the daughter of the family that had hidden him from the enemy for many months. He later served in Korea, Hong Kong and Berlin before transferring to HM Diplomatic Service. The final years of his career were spent in North America and South Africa as a consular officer. Retiring in 1982, he and Giovanna divided their time between their homes in London and Bordighera, Italy. After 66 happy years of marriage, Michael died in 2012.