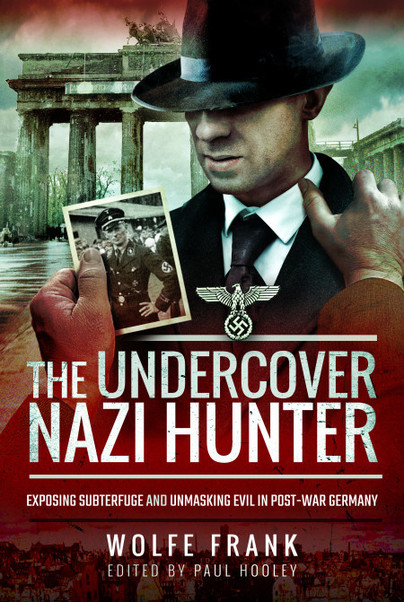 As seen in the Daily Express, July 2019: Hitler assassination attempt – The Führer saw bomb escape as an 'act of God'.

You'll be £17.50 closer to your next £10.00 credit when you purchase The Undercover Nazi Hunter. What's this?
+£4.50 UK Delivery or free UK delivery if order is over £35
(click here for international delivery rates)

Wolfe Frank was Chief Interpreter at the Nuremberg Trials where he was dubbed ‘The Voice of Doom’. A playboy turned resistance worker he had fled Germany for England in 1937 having been branded an ‘enemy of the state – to be shot on sight’. Initially interned as an ‘enemy alien’, he was later released and allowed to join the British Army – where he rose to the rank of Captain. Unable to speak English when he arrived in England, by the time of the trials he was considered to be the finest interpreter in the world.

In the months following his service at ‘history’s greatest trials’, Frank became increasingly alarmed at the misinformation coming out of Germany, so in 1949 backed by the New York Herald Tribune he risked his life again by returning to the country of his birth to make an ‘undercover’ survey of the main facets of post-war German life and viewpoints. During this enterprise he worked as a German alongside Germans in factories, on the docks, in a refugee camp and elsewhere. Equipped with false papers he sought objective answers to many questions including: the refugee crisis; anti-Semitism; morality, de-Nazification; religion; and nationalism.

The result was an acclaimed series of articles that appeared under the generic title of ‘Hangover After Hitler’. The NYHT said at the time: ‘A fresh appraisal of the German question could only be obtained by a German and Mr Frank had all the exceptional qualifications necessary. We believe the result of his “undercover” work told in human, factual terms, is an important contribution to one of the great key problems of the post-war world – and incidentally it contains some unexpected revelations and dramatic surprises’. The greatest of those surprises was Frank single handedly tracking down and arresting Waldemar Wappenhans ranked 4th on the Allies ‘wanted’ list and taking and transcribing the Confession of the Nazi who Himmler had decided would be Head of SS in Great Britain if Germany won the war.

Leaving aside the undeniable atrocities of the Nazi regime, the Confession, and Frank’s assessment of Wappenhans shows him to have been a brave, often honourable, warrior who devoted his life to serving his country with the highest distinction – on land and in the air – throughout some of the greatest battles of both world wars.

The Undercover Nazi Hunter not only reproduces Frank’s published series of articles (as he wrote them) and a translation of the full confession – a hugely important historical document which, until now, has never been seen in the public domain – it also reveals the fascinating behind- the-scenes story of a great American newspaper agonizing over how best to deal with this unique opportunity and these important exposés.


"Paul Hooley is to be congratulated on bringing to the reader a masterful rending of this part of the multi faceted life of Wolfe Frank."

Excellent accompaniment to the book ‘Voice of Doom’. Good for getting a impression of the war from a German Officers point of view.

I recommend this book to anybody interested in post-WWII Germany, in finding more about Wolfe Frank (yes, we need a movie about him), interested in Wappenhans himself, and also in the workings of international newspapers in the late 1940s.

The book covers this extraordinary period in his life with brief coverage of his less than successful existence once his time in Nuremburg passed. It is very clear that Frank was “his own man” and was not made to conform to the life of a prisoner or a soldier. However being an early master of simultaneous translation and the interpreter selected for some high profile moments, he was able to “get away with” some of his transgressions. Like all characters his manager would have wished he were working for someone else!

With short chapters and snappy writing this book is an easy read. The story is an unusual one, well told flowing at a pace.

Together with Paul Hooley, editor of this book, the pair spent a year putting together Mr. Frank’s notes in some sort of order to create a manuscript. The articles, originally published in a series called Hangover After Hitler, together with the Wappenhans confession and excellent editorial notes make a compelling book which is difficult to put down.

The amount of work that the editor has invested in researching Frank´s whole career is impressive and the result is also a vast painting of post-war Germany with many insights.

An interesting book which gives a contemporary view of Germany in 1949 from the articles written by the author from a perspective that I suspect no other author would have been able to elucidate.

For anyone who didn't attend Paul Hooley's last talk on Wolfe Frank, you missed a real treat. Wolf was one of the most important characters involved in the Nuremberg trials and served as primary interpreter throughout. The undercover Nazi Hunter continues Wolf's story as he goes back to Germany post war to assess the situation on the ground for the Americans and whilst he is there bring more Nazi war criminals to justice.

I like to consider myself as a bit of a History buff but had never heard of Wolfe Frank. His story is incredible and he really is one of the unsung heroes of the Second World War. One whose story everyone should hear.

Enthralling insight into the social and political situation in Germany in the aftermath of the Second World War.

Wolfe Frank tells a fascinating story of his efforts to track down and expose Nazis. He also provides a candid account of his colourful life and loves.

This book with its two distinct parts gives a valuable insight and record of the life in post war Germany and of a senior military man who tried to do his duty within all the complications and constraints of Hitler’s Germany. It is up to the reader to conclude if Gruppenfuhrer Wappenhans deserved punishment for his role in the occupied territories.

Article: 'Nazi hunter book launch in Salisbury' as featured by

In 1949, German born Frank Wolfe was Chief Interpreter at the Nuremberg war trials of Nazi generals and Leaders. Earlier, in 1937, branded as an enemy of the state because of his resistance work, he fled Germany. and at he outbreak of WW11, he joined the British Army.


Following his service at Nuremberg he returned to Germany, undercover, to write a series of articles for the New York Herald and Tribune. He found the cities in ruins, he describes the chaos in Germany following its defeat by the Allied Powers. The country had been bombed and fought-over, and with his false papers he was able to meet German workers. Fortuitously he discovered the whereabouts and arrest of SS General Waldemar Wappenhans, listed fourth on the allies wanted list. He transcribed the SS General's confession and this, together with his articles for the New York Herald Tribune, provides the reader with a fresh look a nation in defeat.

Article: 'Second book on Mere's Nuremberg interpreter' as featured by

Article: 'Memoirs of a war trial interpreter unleashed' as featured by 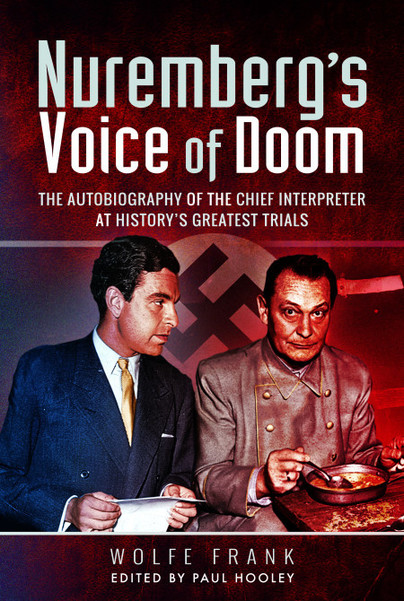 The memoirs of Wolfe Frank, which lay hidden in an attic for twenty-five years, are a unique and highly moving behind-the-scenes account of all that happened at Nuremberg – ‘the greatest trial in history’ – as seen through the eyes of a witness to the entire proceedings. They include important historical information never previously revealed. In an extraordinarily explicit life story, Frank includes his personal encounters, inside and outside the courtroom, with Goering, Ribbentrop, Keitel, Ley, Speer, Hess, et al. This book therefore is a unique record that adds substantially to what…

Click here to buy both titles for £31.49
Customers who bought this title also bought...
Special Offer