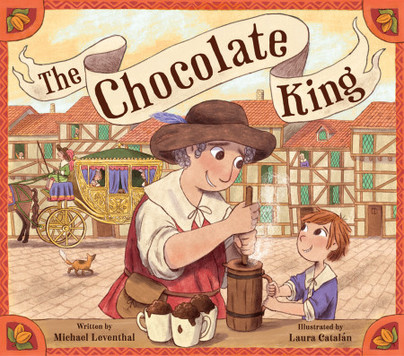 Click here for help on how to download our eBooks
Add to Basket
Add to Wishlist
You'll be £4.99 closer to your next £10.00 credit when you purchase The Chocolate King. What's this?
Need a currency converter? Check XE.com for live rates

The Chocolate King is a thought provoking children's book about something we eat lots of and take for granted today - chocolate.
I found this historical story fantastic.
Marco (the Chocolate king) learns the Aztecs hot chocolate recipe. After being forced to leave Spain they find it really hard to make any kind of living from selling chocolate. But then after an accident that occurs in front of another king, this changes their fortune.
This was a comical read with fantastic illustrations. I went and made a hot chocolate after reading this!

The Chocolate King is part history, part science, and part delicious! We travel back in time to when Benjamin's family arrives in France to escape the Spanish Inquisition. With them they bring his grandfather's, the Chocolate King, famous hot chocolate drink. It takes some time for people to catch on but by chance the Chocolate King meets the actual king and wins over the population!

This book would make a great addition to any cooking unit or a chocolate unit! Homeschoolers and parents will both enjoy the gently nods to history as well as the explanation of cocoa processing in the back of the book.

We take chocolate for granted today - many of us do not stop to think that it was not as widely accepted in the past. The Aztecs had a delicious hot chocolate recipe that they made, and Marco, the Chocolate King, has learned this recipe - and sold it widely in Spain before they were forced to leave. When they made it to France, they found it was very hard to make a living by selling chocolate, that is, until Benjamin has an accident and stumbles out in front of the French king!!

With royal patronage, the family soon has enough money to buy more beans, and also add new spices to their drinks, to add new flavors. What a great end to a messy accident!

This was a cute read, and I loved the history that was included as well. If you love hot chocolate, then you are going to want to try the recipe that is shared in the book (it is delicious, and we enjoyed it here at home). Grab this fun book and share a little history in the guise of a cute story!

Really love this book!! Great illustration for a wonderful story. A Jewish family who made great hot chocolate drink that got chased out of Spain. So they started the same venture in France, with no avail, until, of course, one day they got lucky.

This is a good book for kids who started to enjoy reading longer stories.

I thought that this was a wonderful fun story and I loved the illustrations they really helped to bring the story to life and they are really spot on for the story itself taking you back in time.

The story was easy to follow and it did allow for me to discuss other things with my daughter briefly (she is only 4) but she is learning about being kind at school and this was loosely badged as in the past not everyone as kind and they were forced to leave their homes.

She really enjoyed it and she loves chocolate but the book did its job in that she did pause and think about what has happened to Benjamin and his family too.

It is 4 stars from me for this one – highly recommended!

The Chocolate King is a beautifully illustrated story about the history of how refugee Jews brought chocolate to France after having to leave their homeland. There are timelines and flow charts for when and how chocolate became popular in France. I read this book with my 5 and 9 years old daughters, who both gave the story 5 stars.

The story unfolds about a jewish family that is forced to escape from the horrors of the Spanish inquisition.

It is beautifully written and illustrated as the young Benjamin has to restart his life in France as a chocolatier.

He faces many hurdles on the way but remains focused and deals with all that life throws at him.

An optimistic and uplifting story. I enjoyed it immensely.

THIS BOOK IS SO CUTE! I will be buying this for my daughter!

Really sweet book (pun intended) about a family that immigrates from Spain to France and has to start all over.

Great moral to the story and perfect for 7 and up. Younger kids will enjoy the story (I mean it is about chocolate after all) but they might not get the moral of the story until a little older. Still a quick read and perfect over a cup of hot chocolate!