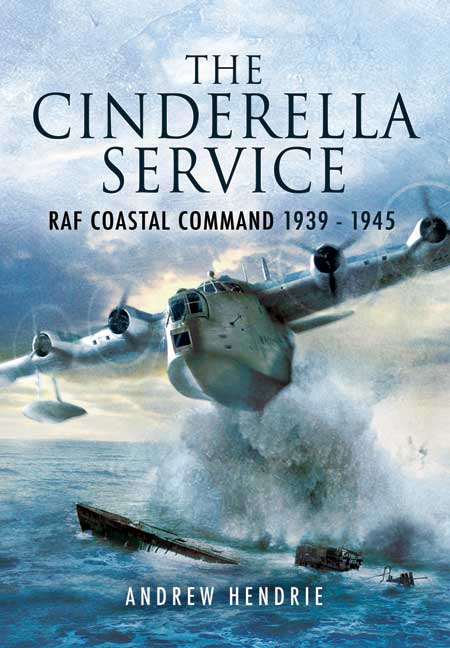 Click here for help on how to download our eBooks
Add to Basket
Add to Wishlist
You'll be £4.99 closer to your next £10.00 credit when you purchase The Cinderella Service. What's this?
Need a currency converter? Check XE.com for live rates

This book reveals the vital contribution that RAF Coastal Command made to the Allies war effort. Although often referred to as the 'Cinderella Service' because by its nature, it did not gain the recognition it deserved and was overshadowed by Fighter and Bomber Commands and considering that it was not given priority in terms of aircraft and equipment, its wartime record was second to none.

The two main roles of Coastal Command were anti-submarine work in the Atlantic and anti-shipping operations against enemy warships and merchant vessels. This work looks at every aspect of the command's work, equipment and aircraft and draws upon many first-hand accounts. Lengthy and comprehensive appendices cover Orders of Battle, Commanders, U boats sunk, ships sunk aircraft losses and casualties.

Andrew Hendrie has had several books published on WWII aviation including The Hudson and The Sunderland. He served in Coastal Command from 1939 and flew operationally from 1942 to 1945. This book is based on a thesis that he completed for a PhD just prior to his recent death.

What this book achieves is a look at every aspect of Coastal Command's work including equipment and aircraft and draws upon many first-hand accounts.
It is at the back of the book that an even greater wealth of valuable information becomes available with comprehensive appendices covering Order of Battle (including in some cases FAA squadrons 'lent' for Coastal Command duties, Commanders, U Boats and Ships Sunk, Aircraft Losses and the Command's Casualties.
To these valuable references in added a first class Bibliography.
This is a paperback reprint, albeit very well produced with pictures which will be new to many plus Maps and a Glossary.
Excellent value, excellent material and hugely useful to the historian, amateur or otherwise.

The Royal Air Force Coastal Command’s main role was hunting and destroying German U-Boats. As the book so eloquently describes, it performed that role and others with relentless effectiveness, particularly from early 1943.
The author describes the lack of recognition accorded Coastal Command’s achievements by politicians and the media. He examines every activity of Coastal Command’s work, people and equipment. He highlights its many successes and the casualties suffered in achieving them. A valuable history of a rather neglected subject.

Itâ€™s with some shame that it has taken over 65yrs before a truly competent & detailed publication has appeared about the exploits of RAF Coastal Command. Itâ€™s more favoured kin of Fighter & Bomber Commands, have been almost exhaustively mined over the intervening decades, yet bar for the odd book here & there Coastal Commands efforts & history have been sidelined to a few sentences or notations. Hendrieâ€™s book will remain the unofficial history of Coastal Command for many a year, and it will fly that flag with pride, for such is the quality of Hendrieâ€™s work.

We see how Coastal Command grew from a motley collection of some 240 odd wholly unsuitable aircraft for the most part in 1939. To a large efficient machine of around 1000 modern aircraft, with many specialist features & missions to boot.
The book is broken down into 9 chapters, with the first two covering aircraft types & weapons accordingly. We see how Coastal Command struggled to get the aircraft it required, especially in the face of determined opposition from Bomber Command and also to some extent Churchill himself. The early make do collection was gradually replaced by more usable types, able to perform the tasks asked of it. Weaponry, as in any war develops at a pace and that was no different here. The aerial depth charge being Coastal Commands prime weapon is discussed in some depth, along with torpedoes, rockets and guns. The author makes due note of the initiative shown by the men of 10 Sqn RAAF, who employed some 18 machine guns on some of there aircraft early in the war, before being reined in by the powers that be.
After these 2 opening chapters we get into the meat of the book, the operational aspect. This is neatly sub-divided into Anti-Submarine Warfare (ASW), covered in Chapters 3 & 4), with chapters 5 & 6 covering Anti-Shipping (Merchant) and Anti-Shipping (Naval). The ASW chapters covers the Air Gap in the Atlantic, the Bay of Biscay campaign, operations in the Meditterean Sea and finally the coastal campaigns along NW Europe/Norway in the latter yrs of the war. The Anti-Shipping chapters concentrates upon a more limited geographical area but equally as interesting and even more dangerous. We see the formation of Strike Wings that tore into Axis coastal shipping and the perilous task of attacking German surface vessels-off all sizes. Chapter 7 deals with the less glamorous and even less publicised areas of Air-Sea Rescue, Photo Recon and finally Meteorological services. All of these lesser facets helped square the circle of Coastal Commands place & voice during the war.

With the final 2 chapters covering a retrospective angle and a conclusion, we are left with a plethora of some 21 Appendices, which cover and detail out the various results & consequences from the previous chapters. These alone are worth the book price alone in my opinion. The book is fully referenced & noted, with some 59 B/W photographs & illustrations, plus 3 maps to help the narrative along.

If any official history is ever wrote about Coastal Command, the this book will be heavily referenced in it, its that good.