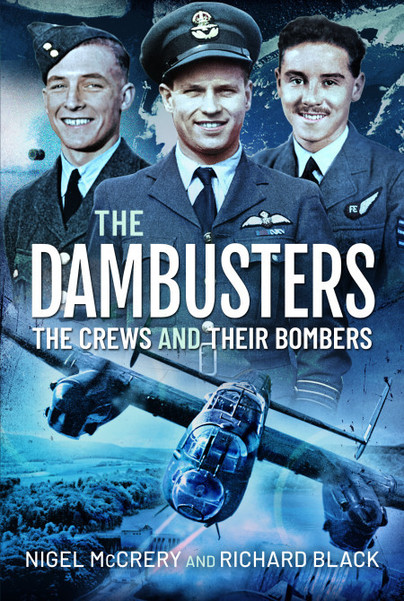 The Dambusters - The Crews and their Bombers (Hardback)

Preorder
Add to Wishlist
You'll be £20.00 closer to your next £10.00 credit when you purchase The Dambusters - The Crews and their Bombers. What's this?
+£4.50 UK Delivery or free UK delivery if order is over £35
(click here for international delivery rates)

The daring and iconic Dambuster raid (Operation Chastise) on 16th/17th May 1943 caught the public’s imagination at the time and thanks to the book and film has held it ever since. It matters not that its success in smashing the three dams was only partial – it was a triumph of scientific innovation combined with flying skill and courage.

In this fascinating book award-winning writer Nigel McCrery examines the events of that fateful unforgettable night raid from a new angle. Taking each Lancaster bomber in turn, he identifies every member of the crew and describes their lives, roles and fate – a horrific 53 of the 133-aircrew involved were killed during the raid. Those lost included 13 RCAF and two RAAF airmen. Many survivors were killed later in the War: Wing Commander Guy Gibson VC being one.

In addition, we learn how each of the 19 Lancasters fared. Only 11 returned and we learn what happened to these during the rest of the War.

Thanks to extensive research this is a moving and revealing exposé of the most famous bomber raid of the Second World War – or any war.

Richard Black was educated at Trinity School, Croydon and University College, London joining their Air Squadron. A keen collector of medals and aviation related artefacts, he formed Chelsea Military Antiques in 1997 before setting up The London Medal Company, the UK's biggest medal dealership in 2010. He has long been interested in The Dams Raid, having handled many of their medals and artefacts such as log books. He lives close to Biggin Hill with his wife and four children.