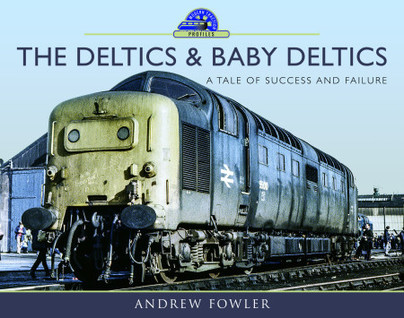 The Deltics and Baby Deltics (ePub)

A Tale of Success and Failure

Click here for help on how to download our eBooks
Add to Basket
Add to Wishlist
You'll be £9.98 closer to your next £10.00 credit when you purchase The Deltics and Baby Deltics. What's this?
Need a currency converter? Check XE.com for live rates

Andrew Fowler is a well known writer of railway history, with a regular feature in Railway Herald Magazine. The Deltic class 55 Locomotives were some of the most successful, first generation diesels introduced to British Railways, being constructed from 1960-1962 and numbering twenty two, in the production class. The prototype machine was constructed in 1956 and was tested extensively on express trains on the London Midland and Eastern Regions of B R, until 1960. The interest and enthusiasm, for the class is reflected in the fact, that six examples of the class are preserved, including the 1956 prototype. The Baby Deltics, were a derivative Locomotive design, using one rather then two engines, for use on outer suburban and short main line semi fast services. Only ten Baby Deltics were constructed between 1961-1962, for use on services out of London Kings Cross. The Baby Deltics were all withdrawn within a decade, as they were not very successful in main line service.

This is the first volume in a new series called Modern Traction Profiles aimed at modern traction enthusiasts and historians.
My first thought was ‘why another book on the Deltics?’ given the number of volumes written over the years on these iconic locomotives. Initially looking through, it appears to be well illustrated with what appear to be new images to me. The photographs are well reproduced to the usual high standard I’ve come to expect from Pen & Sword books. They are mostly full page as well.
The author details the background of both classes, including the Prototype Deltic and Baby Deltics with a look ahead to the Baby Deltic project also.
The production Deltics feature heavily and the author provides an introduction to the class and details each locomotive individually. Upon reading through, the information correlates with other volumes in my library for dates for things such as naming, livery changes, fitting details and withdrawal. What this volume does well is present the information in an easily readable style. The story is told for each member of the class and for those survivors is brought up to date.
This is a well written and presented book and worth adding to your library. Recommended.

"This book is bound to find a place on the bookshelves of the many devotees of this fine class of locomotives."

"A most interesting read for the diesel locomotive lover."

The Society of Model and Experimental Engineers Journal - October 2021

Product Of The Month

Overall this is an excellent book that will be a welcome addition to the bookshelves of any modern traction enthusiast. I had high hopes when this book landed on my desk – and I wasn’t disappointed.

Whilst the main aim of the Society is to concentrate on the period between 1923 and 1947 we also cover both the pre and post LNER period. This new volume from Pen and Sword therefore fits nicely into that category especially as it covers two classes of diesel locomotive that were to take over both the main line and suburban services from King’s Cross following the demise of steam.

The first chapter looks briefly at the introduction of the first main line diesels in 1947 and 1950 as designed by Ivatt and Bullied respectively. Next comes a more in depth look at the prototype Deltic with some nice colour images included. The development and introduction of the production locomotives from 1968 is covered in considerable detail and is extremely well illustrated with most of the photographs being published for the first time. To complete the story each individual member of the class has in effect what is a chapter each. Full details of the introduction, workings, work visits and eventual withdrawal or preservation are given and again this section is profusely illustrated.

A chapter is devoted to the Baby Deltics and details the trials and tribulations of a fairly troubled class of just ten locomotives which only lasted in service from 1958 to 1971 with some lasting less than ten years. One slight disappointment to me is the fact that there are only four illustrations included.

As usual with Pen and Sword the quality of reproduction is excellent and the majority of the photographs are in colour. There have been many books published about the Deltics but this must rank as one of the best. Highly recommended.

A very interesting book covering the history of this iconic class of motive power on British Railways. This book has some excellent photograps and is a great source of reference for the railway buff

Andrew Fowler has been writing articles for various railway magazines for many years, his native area is Lancashire, where he has been involved with railway preservation and historical research.

He has a keen interest in both steam and first generation modern traction, this is his first book looking into two classes of early diesel traction.

He is a photographer by profession and has taken numerous railway pictures over the years, covering both historic and modern traction.