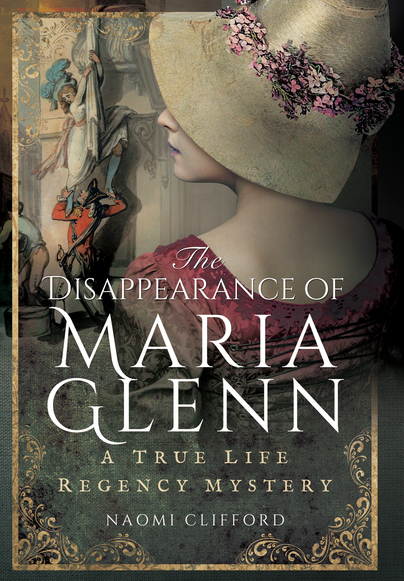 The Disappearance of Maria Glenn (Hardback)

As featured by the Somerset County Gazette

You'll be £19.99 closer to your next £10.00 credit when you purchase The Disappearance of Maria Glenn. What's this?
+£4.50 UK Delivery or free UK delivery if order is over £35
(click here for international delivery rates)

Taunton, 1817. What seems a simple newspaper report of “elopement gone wrong” turns out to be a rollercoaster story of crime, coercion, illusory triumph and fraudulent defeat. Barrister George Tuckett wakes to discover that his 16-year-old niece Maria Glenn, reputedly the heiress to West Indian sugar plantations, is missing. He discovers that she has been abducted by the Bowditches, a local farming family, who intend to force her to marry one of their sons. Maria is rescued and Tuckett starts investigating the crime himself, uncovering a complex and disturbing web of lies and impersonation.

At a drama-filled trial that is the talk of the country, four people are sentenced to prison. When a cabal of powerful people in Taunton begin a campaign to destroy Maria's testimony, her supporters fall away and she is openly vilified. Her enemies have her arrested for perjury and, after a ramshackle trial, she is forced to flee into exile. Yet the story of conspiracy and deception does not end there, as Maria and her uncle were to suffer one final and devastating betrayal.

But was Maria telling the truth? Both sides had given utterly different versions of events during the trial – so it was clear that someone had to be lying.

Author article 'Love and Lies' as featured by

The audience for this book includes general readers, history buffs, and scholars in history, law, and women’s studies. The book provides an accessible account of the (possibly staged) kidnapping of 16-year-old heiress Maria Glenn from her uncle’s home in the village of Taunton, England, in 1817. The kidnapping, rescue, investigation, trial, and imprisonment of many members of the Bowditch family serve to highlight the period’s laws surrounding marriage, forced marriage, elopement, and women’s property ownership. B&w historical illustrations and photos are included.

MEET THE AUTHOR ARTICLE as featured in.

In 1817, a young, naïve, woman went missing from her uncle's home in Somerset in the dead of night. When eventually found, it was said that she had been abducted by a local family intent on forcing her to marry a farmer's son, thus making him the legal owner of the fortune she was said to be likely to inherit. In a case that attracted the attention of the newspapers, a court case ensued, in which the young girl's reputation was placed in the dock.

It is this once notorious case, centring round the 16-year-old Maria Glenn, that Naomi Clifford deftly investigates in her new book. Combing first-hand accounts, newspaper and trial reports, archival sources and a wide range of secondary texts, she creates a page-turning tale of crime, gossip and relationships.

As Clifford recognises, it is difficult after two centuries have elapsed, to know for sure who was telling the truth and who wasn't in this case. However, she clearly has a lot of sympathy for Maria Glenn, and this infuses her book; yet she also notes possible inconsistencies and alternative histories to the one she hopes is the truth.

The book sheds light on gender roles, property ownership and community relations in late-Regency England, and this is recommended to anyone interested in this period.

Read it for: A well-researched, dramatic tale of greed, abduction and reputation in early 19th century England.

As featured on Amazing Women in History.

A true life story, brilliantly researched and told in an informative but very easy to read style.

Background information on the main and supporting characters brings them very much to life, and the facts relating to the abduction and the ensuing legal drama are documented giving the account from both sides. It’s one of those stories which makes you realise that the truth is often stranger than fiction and fascinating for anyone interested in women’s history and the Regency period. It’s also a brilliant snapshot of the social mores and attitudes of middle class England at the time. Has to be read to be believed and very definitely and highly recommended.

Naomi Clifford manages to do the nearly impossible. She's combined a true-life mystery and a discursive history. She creates a page turner which is wildly informative, shedding fresh light and insights into dark unexplored histories, making strange what we’d assumed was familiar.

The disappearance of Maria Glenn takes us on a picaresque journey into a world of elopement and abduction. Georgette Heyer’s romantic Regency world will never be the same again. In short order Naomi propels us from the plantations of St. Vincent to sleepy West Country farms and claustrophobic middle class life in Taunton; its legal community, newspapers, politics and courts. She deftly moves us to London and the Courts of Justice and its prisons. When the tale finally ends the aura of mystery isn’t absolutely lifted.

Comparisons with the inestimable Kate Summerscale are inevitable. Naomi Clifford is her equal in terms of her riveting prose and her superior as a serious social historian.

This is a thoroughly enjoyable book. Naomi Clifford's writing has elegance and a lightness of touch that make this riveting story a joy to read. I became completely engrossed in Maria Glenn's life story. She and the cast of characters around her are brought vividly and compassionately to life. The richly textured details of the period, of the culture and social mores make for fascinating reading, and the vibrant style is engaging. I was kept guessing as to the outcome of the courtroom drama till the very end. I loved it. Highly recommended.

I was quite frankly astonished by this story and the way that Maria was tormented throughout, not only by her abductors but afterward by the citizens of Taunton. Naomi Clifford has done a masterful job of researching the case and relating the shifting tides of the legal battle and public opinion. Even more surprising is the way in which Maria is able to bear up in the face of horrible false accusations. This is a great book for anyone interested in legal history or women’s history in England. Included in the book is the complete transcript of Maria’s statement of her abduction and the events leading up to it.

Naomi Clifford's true life story of Maria Glenn is written with superb attention to detail and beautifully crafted. The author has a reel feel for both the period and for her shy heroine. She manages to combine historical accuracy with the drama of a good novel and keeps the pages turning to the end. I loved it and thoroughly recommend. I'm already looking forward to her next book....

touch that make this riveting story a joy to read. I became completely engrossed in Maria Glenn's life story. She and the cast of characters around her are brought vividly and compassionately to life. The richly textured details of the period, of the culture and social mores make for fascinating reading, and the vibrant style is engaging. I was kept guessing as to the outcome of the courtroom drama till the very end. I loved it. Highly recommended.

Stories of abduction were frequent during this time and it is often difficult to differentiate fact from fiction, but Naomi has clearly researched not only the characters but the period exceptionally well. She has done an amazing job in bringing Maria and the other characters to life. With much detective worked she has managed to piece together the characters in this true story, from minimal initial information. It's a book which from the first page I simply had to keep reading to find out how it ended, there are plenty of twists and turns throughout, but I won’t spoil it by giving away any clues. Naomi offers the information in an easy and flowing style making for an incredibly enjoyable Regency read. I would highly recommend it.

Naomi Clifford brings this story of abduction and the aftermath in Regency Somerset brilliantly to life. Her style is as readable as her research is thorough. It is a fascinating look at the life of ordinary people transformed by a single event with devastating consequences. Read it!

The Regency period has always been one of my favourite settings for romantic fiction - in my younger days I adored the stories of Georgette Heyer, for example. Naomi Clifford's story of Maria Glenn has all the hallmarks of such romantic fiction, but is a true story. Absolutely fascinating.

As featured on The British Newspaper Archives