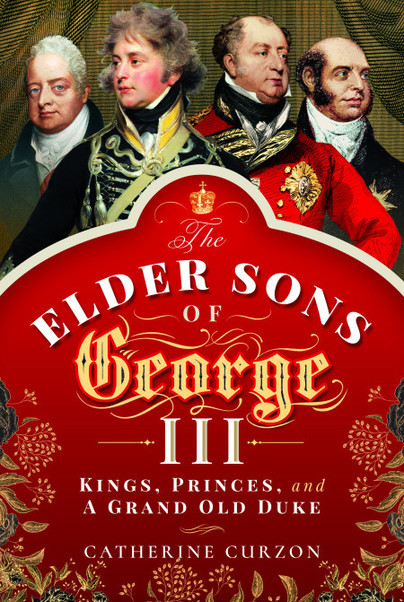 Add to Basket
Add to Wishlist
You'll be £15.99 closer to your next £10.00 credit when you purchase The Elder Sons of George III. What's this?
+£4.50 UK Delivery or free UK delivery if order is over £35
(click here for international delivery rates)

For nearly 60 years, King George III reigned over a tumultuous kingdom. His health and realm were in turmoil, whilst family life held challenges of its own. From the corpulent Prinny and the Grand Old Duke of York, to a king who battled the Lords and the disciplinarian Duke of Kent, this is the story of the elder sons of George III.

Born over the course of half a decade of upheaval, George, Frederick, William, and Edward defined an era. Their scandals intrigued the nation and their efforts to build lives away from the shadow of their impossibly pious parents led them down diverse paths. Whether devoting their lives to the military or to pleasure, every moment was captured in the full glare of the spotlight.

The sons of George III were prepared from infancy to take their place on the world’s stage, but as the king’s health failed and the country lurched from one drama to the next, they found that duty was easier said than done. With scandalous romances, illegal marriages, rumours of corruption and even the odd kidnapping plot, their lives were as breathless as they were dramatic. In The Elder Sons of George III: Kings, Princes, and a Grand Old Duke, travel from Great Britain to America and on to Hanover in the company of princes who were sometimes scandalous, sometimes sensational, but never, ever dull.

I enjoyed this look at the elder sons, especially since they were the ones who most closely shaped the succession and the rush to secure brides on the brothers’ part in order to sire the potential heir following George’s daughter Charlotte’s death is well known. Curzon perfectly strikes that balance between providing a good overview for those new to the topic and also providing insights for those who are more educated on the subject, so regardless of if you’re a historian or a hobbyist, there’s something worth cleaning from this text.

This was a good, well-researched book focusing on the first four of George III's sons. Less attention is paid to George IV ("Prinny"), since the author points out there are so many books about him out already. But Curzon still provides plenty of information to introduce a novice reader to George, as well as the others. She never assumes the reader knows about anyone ahead of time and gives a decent overview of all four men's lives. A good book to introduce readers to the time and the princes.

A wonderful historical fiction of King George III's four oldest sons -- George, Frederick, William, and Edward. It told about each one's lives which were incredibly fascinating. It was an easy educational read and quick read. Fantastic for beginning monarchy reading.

The Elder Sons Of George III, if you enjoy historical fiction, Catherine Curzon, she never disappoints in her books, her writing, the way she has with her words to make such a exciting story of this incredible time in English history!! Follow their fathers time ruling over England,the scandals, the politics and the effects this family had not only in England but around the world in the 18th Century.. You begin to find out the different personalities of these sons--brothers and how the English survived this kind of rule over a course of 60 years,I think it was and how their behaviour affected English history. Who would make The best ruler next out of these brothers if their father ever died??The other characters who helped shape English history besides the sons, you will become to see who, what and where of how they all help created these time in history and the scandals, loves,hates, loyalty and decisions and why they were made.. George III and Queen Charlotte children,total 15 that lived.. When you do finish this fantastic story you will have much more insight into the family and shake your head at how they could actually get away with things and the people that these sons hurt,destroyed or tried to destroy not only the people in these brothers lives but their selves in the process.. I have read all of Miss Catherine's stories except for the daughters,sisters of this family,it's a must on my list!! This book takes you to another century another land and you travel the world where you actually feel as you are living in this time with all of these characters..you will also know who your friend is who is your enemy and become apart of this dysfunctional family and you will either love or not these brothers but understand more and it puts a whole new meaning or not on "Brotherely love"!! Received from Net Gallery and you I promise, not be disappointed in this amazing story of who King George III's sons were and had become as brothers...

As the author's other book about George III's daughters, this was a very readable and approachable book. It wasn't too dense to get through and gives a brief overview of George III's four eldest sons -- George, Frederick, William, and Edward. They had many similarities throughout their lives and it was interesting reading about each of them in turn since they did lead very intriguing lives. Just an overall good read that is approachable for a novice in this era and someone who has read a lot about it.

George III was the longest reigning king in British history. Given this fact and that he and his wife Charlotte produced no less than fifteen children, it's difficult to see how he could have done more to ensure the survival of the monarchy and the House of Hanover.
Despite this, the final years of his sixty year reign which ended with his death in 1820 were clouded not just by his own insanity but by a succession crisis. Some of it was bad luck. Some of his children and grandchildren died before reaching adulthood. But his remaining offspring, prone to adulterous liaisons, overeating and drinking, fighting duals and other bad habits, were also genuinely terrible at the primary Royal function: producing heirs and spares themselves.
This is the story of his four oldest sons, all born in the 1760s and thus all in their fifties by the closing years of their father's long reign.
The first, George, was a fat waste of space who became Prince Regent and then George IV between 1820 and 1830. His own daughter, Princess Charlotte died in 1817. Then came Frederick, the Grand Old Duke of York of nursery rhyme fame. He predeceased his older brother after a long military career blighted by scandal. 'Old melon head' William, Duke of Clarence was next. Never expected to be king, he was put into the navy as a child but became King William IV between 1830 and 1837. His head was indeed an odd shape. A bystander once threw a rock at it but he was protected by some padding he'd added to make his hat fit on his oddly shaped cranium.
Finally, Edward, also something of a disappointment. He died in 1820, shortly before his father. Yet it was he who in his final year would become father to the baby girl who would famously rule the empire for the last sixty years of the century and whose great great granddaughter sits on the throne today.
These are just the highlights. Catherine Curzon tells the story so much better in this thorough and very readable volume.

Although I’ve just recently studied the history of the UK up to and stopping with Victoria via the excellent series by Peter Ackroyd, I cannot say I knew the period and royal personnel described in this book exceedingly well. Therefore, I was quite excited to be granted a free copy—for a non-historian, reading history books is always about learning new things, after all. I wasn’t disappointed by the trip, either. Catherine Curzon’s writing style is light, informative, and entertaining. She paints the different persons and the times in vivid colours, often with a little wink shining through the turns of her phrases, always sympathetic, even when talking about some less savoury characters. I’ve learned a lot of historical facts about George III and his wife Charlotte as well as their four eldest sons George (future King George IV), Frederick (the Grand Old Duke), William (future King William IV), and Edward. Very interesting indeed, the biographies are woven together to form a coherent narrative, sprinkled with anecdotes and character studies. The style is never pedantic, and the author always tries to remain non-judgmental, never really taking sides. A book I can recommend without a moment’s hesitation for those interested in that tumultuous period (Independence of the USA, French Revolution, Napoleonic Wars, etc.).

Having read another of Catherine's books, about George's daughter's, I kind of knew what I'd be getting, but this book far exceeded expectations. Perhaps it is just because the sons lead more colourful lives than their sisters, but this was much more interesting and gripping, and I had enjoyed the other book. I found i couldn't put this book down and, as due to the male line being the one to inherit, wanted to follow the line of ascension to learn more about those who did ascend, and those who just came close. I would heartedly recommend this book, not just to those who have a love of history as I do, but also others who just want to read the ridiculous stories of what these men got up to.

CATHERINE CURZON is a historian of Georgian royalty. Her work has been featured on the official website of BBC History Magazine, and in publications such as All About History, Who Do You Think You Are?, and Jane Austen’s Regency World. She has spoken at venues including Kenwood House, Wellington College, the Royal Pavilion, the National Maritime Museum and Dr Johnson’s House. Her first play, Being Mr Wickham, premiered to sell-out audiences in 2019.
Catherine holds a Master’s degree in Film and when not dodging the furies of the guillotine, can be found cheering on the mighty Terriers.
She lives in Yorkshire atop a ludicrously steep hill.
Visit her glorious Georgian bubble at www.madamegilflurt.com

King George III died 29 January 1820 at Windsor Castle. He was 81 years old when he died, and it is still unknown to this day what his illness was. George suffered with mental illness in the later part of his life and would die on this date just six days after the death of his son, Prince Edward. He is the third longest reigning UK monarch in history.

Prince Frederick, Duke of York (brother of George IV), died on 5 January 1827. He was buried on 20 January 1827 in St George’s Chapel, Windsor Castle. 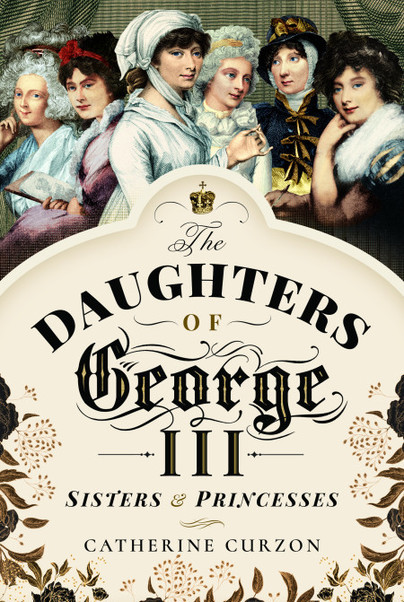 The Daughters of George III Sisters and Princesses (Hardback)

In the dying years of the 18th century, the corridors of Windsor echoed to the footsteps of six princesses. They were Charlotte, Augusta, Elizabeth, Mary, Sophia, and Amelia, the daughters of King George III and Queen Charlotte of Mecklenburg-Strelitz. Though more than fifteen years divided the births of the eldest sister from the youngest, these princesses all shared a longing for escape. Faced with their father’s illness and their mother’s dominance, for all but one a life away from the seclusion of the royal household seemed like an unobtainable dream. The six daughters of George III were…

Click here to buy both titles for £35.98
More titles by Catherine Curzon