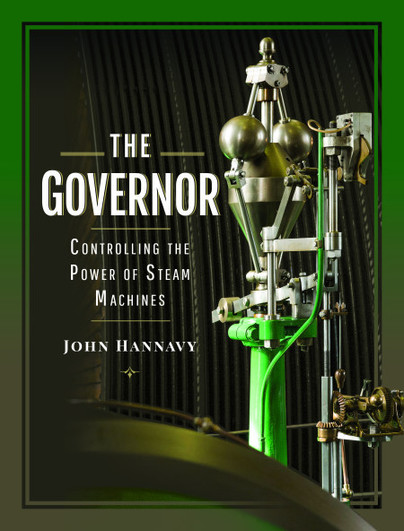 The Governor: Controlling the Power of Steam Machines (Hardback)

Add to Basket
Add to Wishlist
You'll be £27.00 closer to your next £10.00 credit when you purchase The Governor: Controlling the Power of Steam Machines. What's this?
+£4.50 UK Delivery or free UK delivery if order is over £40
(click here for international delivery rates)

Power without control is unusable power, and long after the invention of the steam engine, finding ways of applying that power to tasks where consistency was of paramount importance was the 'Holy Grail' which many steam engineers sought to find. It was the centrifugal governor which brought precision to the application of steam power, and its story can be traced back to 17th century Holland and Christiaan Huygens' development of both the pendulum clock and system controls for windmills, and governors are still at the heart of sophisticated machinery today – albeit electronic rather than mechanical.

Without the centrifugal governor, precise control over the increasingly-complex machinery which has been developed over the past two centuries would not have been possible. It was the first device to give the engineman the control they needed.

As machine speed increased, the governor had to evolve to keep pace with the demands for greater precision.

Over a hundred British patents were applied for in the nineteenth century alone for ‘improvements’ in governor design, many of which could be fitted, or retro-fitted, to engines from every large manufacturer.

Some enginemen, on taking up new appointments – their jobs depending on the precision and consistency of their engine’s operation – would even request that the governor be replaced with their preferred model.

This book, the first to deal with the subject, tells the story of the evolution of the original ‘spinning-ball’ governor from its first appearance to the point where it became a small device entirely enclosed in a housing to keep it clean, and thus hidden from view.


"This is an attractively produced work and a pleasure to look through. A book to be recommended."

Model Engineer, no 4685 25th February 2022 - The Society of Model and Experimental Engineers

"Your reviewer found this book interesting and one which EIM readers will likely equally enjoy."

"I found this a glorious well produced book which I devoured enthusiastically! I commend it to anyone with a serious interest in mechanical engineering."

As featured in: 'Author's history of the first engine management device'

John Hannavy is a writer and photographer with a passion for engineering history. His work regularly appears in heritage magazines. A retired academic, he has written extensively on railways and other forms of transport, steam-powered machines, the history of photography, and the industrial development of Victorian and Edwardian Britain. His previous books Transporter Bridges – an illustrated history and The Governor – controlling the power of steam machines, are both also published by Pen & Sword.