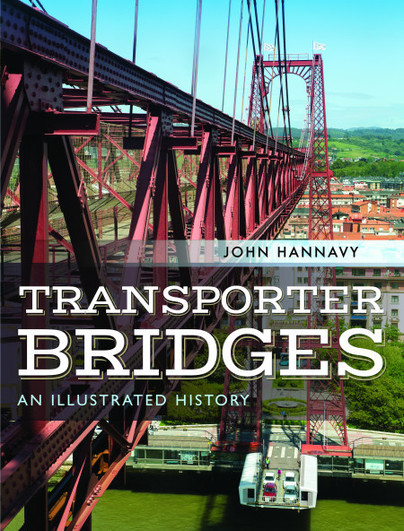 Add to Basket
Add to Wishlist
You'll be £30.00 closer to your next £10.00 credit when you purchase Transporter Bridges. What's this?
+£4.50 UK Delivery or free UK delivery if order is over £35
(click here for international delivery rates)

Transporter Bridges are a legacy of the closing years of the 19th century and the early years of the 20th, and served a brief but important need. The huge increase in road transport however quickly rendered them obsolete, and although many were planned, little more than twenty-one were ever completed across the world – five of which were in Britain. Just nine still stand in their original form and currently only five are currently still in use – one each in Spain and Germany, two in the UK, one in Argentina – are unused since the 1960s. They only recently returned to service in 2018 after restoration – and the last surviving 'pont transbordeur' in France returned to service in 2019 after major works. The second of Germany's surviving transporters is currently awaiting repair after a ship collided with it.

But is the transporter bridge about to undergo a surprising renaissance? Proposals exist for three new bridges, all in France – at Nantes, Marseille and Brest – to replace some of those lost during and after the Second World War.

The book is illustrated in colour throughout, using hundreds of photographs – the author’s own modern images and many historic photographs and postcards chronicling the construction and operation of these unusual structures.

"This is a well-produced book about a fascinating subject. Profusely illustrated, it is also printed to Pen & Sword’s usual high standard. Recommended for anyone with an interest in bridges or unusual transport systems."

This book is an excellent historical account and is copiously illustrated with quality photographs, many by the author.

This fascinating volume proves that, fortunately, transporter bridges have an interesting future, not just an enthralling past.

John Hannavy is a writer and photographer with a passion for engineering history. His work regularly appears in heritage magazines. A retired academic, he has written extensively on railways and other forms of transport, steam-powered machines, the history of photography, and the industrial development of Victorian and Edwardian Britain. He is a Fellow of the Royal Photographic Society, and was Centenary President of the British Institute of Professional Photography, whose Fellowship he also holds. His 2020 book Transporter Bridges – an illustrated history is also published by Pen & Sword.